If abortion is legalised, it changes culture and society. Life becomes disposable. What was supposed to be "safe and rare", becomes unsafe and common.
Repeat Abortion Rates


Blog: What is Ireland's Abortion Rate

If abortion is legalised, it changes culture and society. Life becomes disposable. What was supposed to be "safe and rare", becomes unsafe and common.

Look at the experience of other countries where abortion has been legalised: the numbers are shocking - and they are getting worse.

In 1967, the MP David Steele was the architect of the British Abortion Act, which legalised abortion on mental health grounds. Much like the Abortion Bill now being proposed by Enda Kenny, it was meant to be 'restrictive' with two doctors required to certify every abortion.

Instead, abortion on demand became the norm in Britain. Every year, almost 200,000 abortions occur in Britain. More than 7 million babies have had their lives cut short by abortion.

Now Lord David Steele admits "I never envisaged there would be so many abortions. 1

Killing and maiming women too

In December of 2011, abortionist DR. PHANUEL DARTEY, working for Marie Stopes abortion clinic in Ealing, was stuck off the register after being convicted of misconduct relating to the treatment of five women, including one from Ireland.  The abortionist perforated the Irish woman's uterus, left fetal remains inside of her and then sent her home. Upon returning to Ireland, she was brought to the hospital and remained in critical condition for two months.  Gabrielle Malone, manager of Marie Stopes Reproductive Choices in Dublin confirmed that the Ealing Centre, where Dartey worked, was on the list of Marie Stopes' recommended abortion clinics. 10, 11

After feeling 'coerced' by hospital staff at MACCLESFIELD GENERAL HOSPITAL into aborting her 21 week old daughter with Down Syndrome, an unnamed woman delivered her baby alive.  When the botched late-term abortion was completed, she was handed her daughter in a cardboard box and the staff never offered any assistance. An incubator was eventually brought into the room, but never switched on.  One nurse told the mother after her daughter died, "The baby was not really alive. She was just having reactions." 12

ALESHA THOMAS, was fifteen years old when she died after an abortion performed at a Marie Stopes Clinic in Yorkshire. The Coroner at the inquest into her death strongly criticised the abortion clinic for substandard practises at the clinic, where patients often checked out without medication necessary to prevent infection.  After Alesha began to suffer heavy bleeding, her mother was told by staff at the clinic to bring her to the GP.  The 15-year old suffered a fatal heart attack caused by a bacterial toxin which could have been prevented by the medication. 13

It was reported in the Daily Mail in early January 2014 that the majority of abortions are approved by doctors who haven't met the patient, it said that pregnant women are only seen by doctors in 46% of cases 15

Abortion was made widely available in the U.S. in 1973. The abortion industry, headed by global providers such as Planned Parenthood, focuses especially on poor and minority neighborhoods.

A 'House of Horrors' for mothers and babies

Undercover investigations have revealed video footage of seven different abortion clinics in four states not only FAILING TO REPORT SEX TRAFFICKING OF UNDERAGE GIRLS, but also providing them access to birth control, STD testing, and abortions.  The two investigators, posed as a pimp and his female companion spoke for a long time with one manager at Planned Parenthood of Central New Jersey (PPCNJ) about keeping their illegal activities under the radar while also receiving reproductive services for their prostitutes as young as 14 years old. A spokesman for the New Jersey Attorney General said that the allegations would be looked into. 11,12

The trial of KERMIT GOSNELL and revelations about his grotesque abortion clinic has brought light to a very dark corner of America's abortion industry. The abortionist ran a filthy clinic that used unsterilized medical equipment causing the spread of STDs, women sat on furniture that was stained with blood, and Gosnell employed untrained staff who administered anesthesia without his present, which caused the death of Karnamaya Mongar, amongst others.  Stephen Massoff, a clinic worker, testified about babies were murdered by having their necks snipped and described it as a 'literal beheading'.  Some of the charges against Gosnell including four counts of first-degree murder involving babies born alive after a botched abortion, third-degree murder of a patient, and twenty-four counts of performing third-trimester abortions. 13, 14, 14, 15, 16

Last year, TONYA REAVES died at Northwestern Memorial Hospital after a botched second trimester abortion at the Loop Health Center Planned Parenthood in Chicago, Illinois.  An autopsy report revealed pieces of placenta were left in her, a perforation was found in her uterus near marks left by forceps used to remove the baby, and she experienced massive internal bleeding.  Reports indicate that the Planned Parenthood clinic waited over five hours before summoning medical help while Reaves was bleeding out. Upon arriving at the hospital, doctors were not told what injuries the young woman had suffered, but were forced to determine what happened on their own.  According to the Reaves family's attorney, they are trying to find out if Planned Parenthood or the hospital played a role in her death. 18, 19, 20

In 2010, Spain radically changed its abortion laws, allowing abortion-on-demand up to 14 weeks of pregnancy. Teenage girls could also have abortions without parental consent. 1

Since 1985, mental health conditions have qualified as a threat to the health of a mother and abortion has been permitted for these reasons. Over time, this has become a loophole that has been widely abused and nearly all women have abortions based on mental health grounds.  Currently, a woman may have an abortion up to 24 weeks if two doctors deem that continuing the pregnancy would put her life in greater danger, either physically or mentally, than having an abortion.

The Spanish government is considering restricting abortion laws again, especially in the case of fetal abnormalities.  This would not change abortion based on mental health reasons and won't close the present loophole.  Late-term abortions are allowed if the mental health of the mother is threatened.  Abortionist have been caught fabricating situations to perform illegal late-term abortions. 2

There are over 100,000 abortions annually in Spain 3
Over 95 percent of abortions are for mental health reasons  3
Since 1995 over 1 million abortions have been performed. 4
From 1994 to 2008, the number of abortions  performed annually have increased by 142 percent 5

CARLOS MORIN, also referred to as Spain's 'abortion mogul' was acquitted in February 2013 for a number of crimes relating to his abortion facilities.  Evidence exposed fraud relating to documents that allowed for abortions due to psychological reasons.  Fake doctor's signatures were utilized, along with clinic staff filling out required mental health questions instead of the patients.  The panel of judges justified the dismissal of overwhelming evidence of fraud by stating, "... therefore [they acted] for the benefit of the business itself and never with the intention of harming the women who decided to interrupt their pregnancy, or anyone else." 6

An undercover journalist for Intereconomia TV, secretly video tapped a LATE TERM ABORTION at the clinic El Bosque de Madrid. The journalist posed as a doctor who was looking for employment and his observations were startling.  The actual late-term abortion procedure showing the baby being expelled from the mother reveals a revolting image while a voice over states, "The baby is born dead. His cradle: a trash can".  The patients at the clinic were all over five months pregnant and the youngest patient was fifteen years old.  The abortion doctor admits there is no reason for the abortions, but a psychiatrist signs off on them as required by the law. 7

Every two hours a woman in India dies from an abortion even though the procedure is legal and restricted in the country.  The Medical Termination of Pregnancy Act of 1971, allows for abortion up until twelve weeks of pregnancy if there is a threat to the mother's physical or mental health or if the baby is severely handicapped.  A medical practitioner needs to approve of the abortion and it must be performed in a government hospital.  Abortion can take place between twelve and twenty weeks but two medical practitioners must give permission.  1, 2,

Even with these restrictions in place, many unsafe abortions take place every day and remains dangerous to women.

Legal abortion can also be manipulated to be abusive. 3, 4

In 2003, India amended its Pre-natal Diagnostic Techniques Act (PNDT) to increase protection for baby girls that are being killed in the womb.  The changes in the PNDT Act allowed the law to stay up-to-date with changing technologies that assist in sex determination but could be misused for gendercide.  While the Indian government has made efforts to end female genderciode it still occurs and has shocking results: 7, 8,

This past year, Dr. Shivaji Sanap, a private doctor, and a number of his associates were arrested in India for performing sex-selective abortions through all nine months of pregnancy.  He has been accused of performing late-term abortions that took the lives of two girls, eight and five months old, whose bodies were discovered in a dry riverbed. He has been also charged with violating India's sex-selective abortion laws. 9

It is believed  600,000 abortions are performed in India each year with the intent of killing a female baby. 10

Even though Indian law requires abortions to be performed by a medical practitioner in a government hospital, this regulation is not always followed. Recently, a saline abortion performed by a nurse, without a doctor's assistance, claimed the life of a young woman and her baby. The parents of this young woman took her to a private clinic after she was deserted by a man who had promised her marriage.

Nurse D Vijaya Kumari administered saline into the girl and said there would be no trouble with the termination. Shortly after the injection, the girl complained about a stomachache and over the next few days her condition rapidly deteriorated. When she was brought to a private hospital, doctors discovered a massive infection that had damaged her kidneys and spread to her lungs and liver.  The young woman succumbed to the infection and lost her life. 11

While playing cricket, a group of children stumbled upon aborted babies jammed into jars filled with chemical water.  The number of remains discovered is disputed, with Yahoo News reporting seventeen babies found, but the Indian Times claims only seven were found and the other remains were only tumors.  A majority of the bodies discovered were female and are believed to have come from a nearby nursing home.  Police Superintended R.K. Mishra stated, "It shocked us and we're taking serious action to expose the people behind the abortion racket." 12

If abortion is legalised, it changes culture and society. Life becomes disposable. What was supposed to be "safe and rare", becomes unsafe and common.
Repeat Abortion Rates


Blog: What is Ireland's Abortion Rate 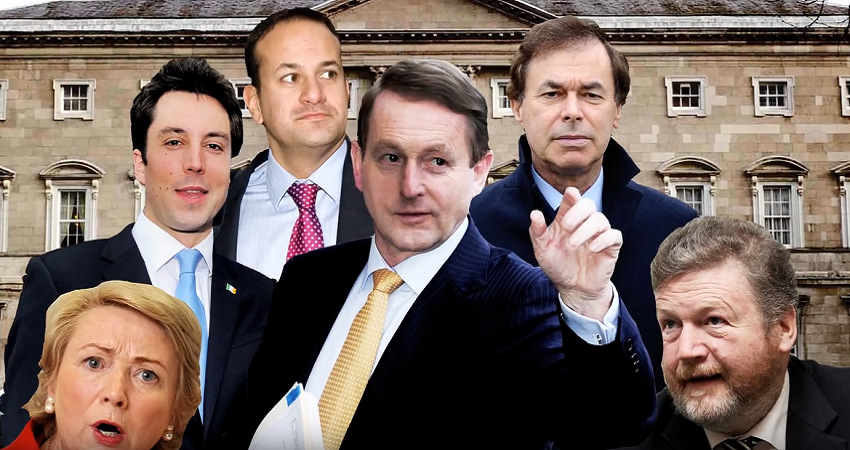