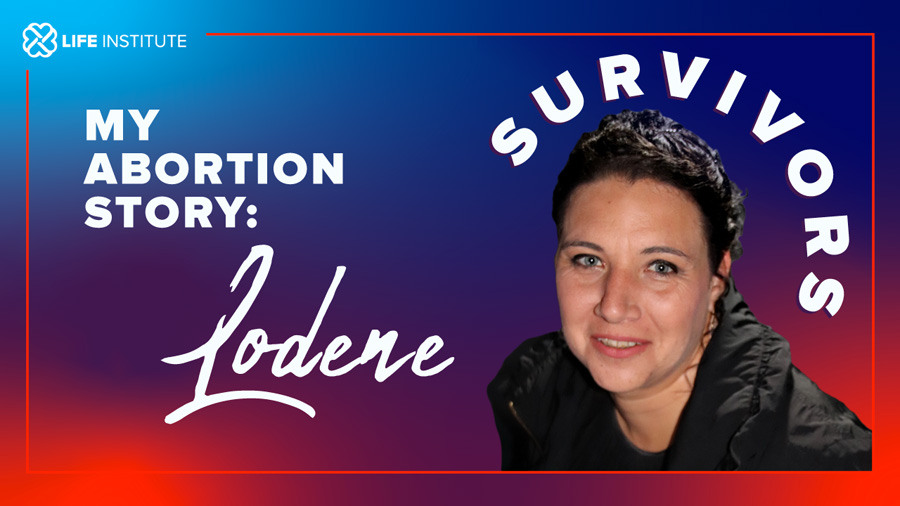 In starting this testimony I want to honor my mother, father and our Lord. I am grateful and  humble for this breath of life.

My mother was 22 and a newlywed, when she found out she was pregnant. She was ecstatic,  but my father not. I was conceived on their honeymoon. My father didn’t want me, so he proceeded to make arrangements for my mother to have an abortion, which was still illegal  at the time.

The first time, my father overdose my mother with medication and put her into a hot bath,  with the hopes that she would get cramps and that would cause an abortion. She was at that time 10 weeks pregnant. 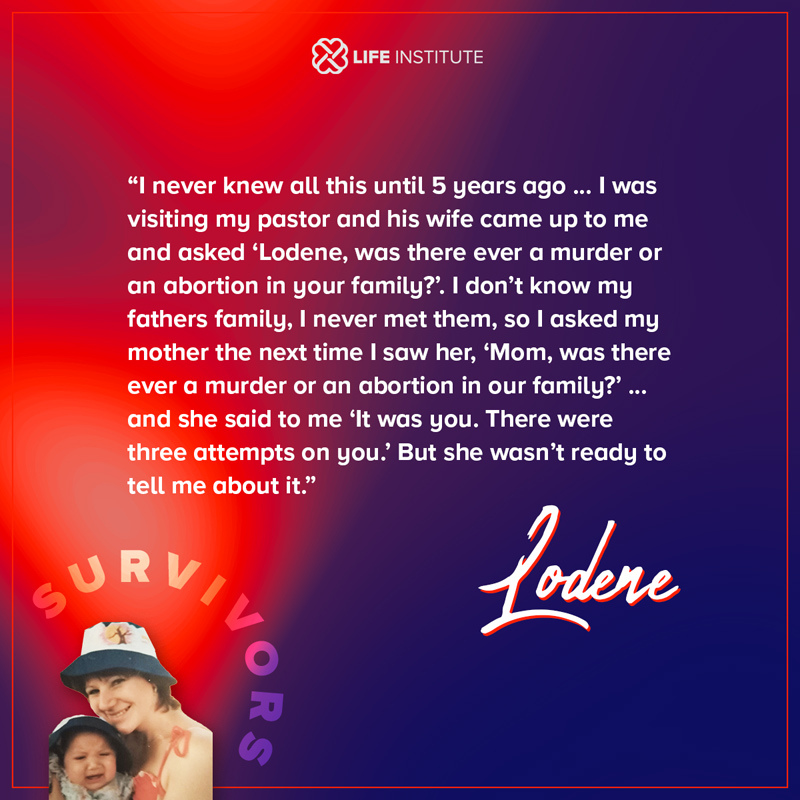 The third time, he drugged her, and when they got to the place for the abortion, the money was not enough,  so they went back home to get more money. A few days, later he snuck some medication into her tea that made her very dizzy and sleepy. Early that morning, he took her to another town close to Johannesburg; they drove on this dirt road while the sun was  coming up. My father stopped the car at a farm, with long walls and a tall gate, and told her to get out of the car and to ring the bell. He gave her an envelope with R3000 in it and told  her to give it to them. As she stood there, drugged, waiting for the people to open the gate, she started to pray a silent prayer. This old woman opened the gate and took the envelope and she put her arms around my mother and led her to a room far from the main house.  She let my mother lay down on the cold floor. This woman injected my mother with poison through her stomach into me. She then tried to puncture the uterus with a knitting pin, but  couldn’t find the uterus. She told my mother to come back after 3 days and with more money.  She helped my mother back to the car, where my mother told my father what had happened  and what the woman told her.

Back at the house, my father hired a man and woman to be by her side whilst he was at work, and help her through the process to make sure that the abortion was a success. He phoned the house regularly to get updates from these people. My mother started getting pains and felt nausea, a feeling of something that wanted to come down. The pains stared to fade and  the man and woman left with their payment. My mother phoned my grandfather to come get her and he rushed her to the hospital. It was there that a young mother’s prayer really began. The promise that was made that morning was kept by my mother and by God. My father went to fetch my mother from the hospital and at the house, he moved her to the guestroom. After a week, my father packed all my mother’s belongings and asked my uncle to drop her off at my  grandfather’s house. My father didn’t allow my mother back into the house again and he passed away a few months later in a car accident. 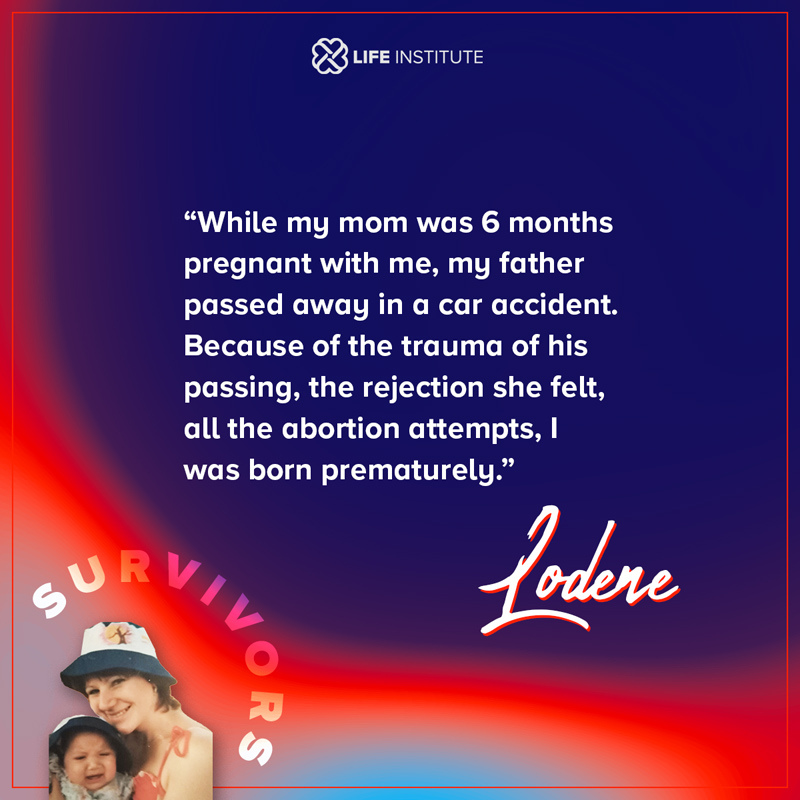 Later in the pregnancy there were complications and my mother was rushed back to hospital. I was  born with an emergency C-section. The news from the doctors broke my mother’s heart. They told her that I was alive and they were going to rush me to the Johannesburg hospital’s emergency care unit, but there was no hope for my survival. She came to me, where I was in an incubator and blue. That’s where  we had our first moment. She put her hand though the glove to touch me, and I put my hand on my mother’s. When I left, my mother went to the bathroom and cried out the prayer of a mother’s heart for her child to live. I spent three months in an incubator, born prematurely because of the abortion attempts.

Her promise to God: If He could give grace and mercy to this baby and let her live, she would  love her, with her whole heart and protect her from this world, and God must use this child,  for His glory and His Kingdom, this child must be an instrument for God.

My mom protected me so much, I didn’t even know about her painful journey, until God decided it was time, His time. Late one evening, I was visiting a pastor’s house, and his wife came to me, and asked if someone in my family murdered someone, or was there an abortion? The next morning, I phoned my mom and asked her. Her response was as cold as ice, “Who told you?” I told her what had happened the previous night and she just said she would tell me everything when she was ready.

A few months later, my mother told me what had happened. As she finished her story, she asked me how I felt. My answer was shocking to us both. I told her that it wasn’t for me to judge my father, and that we can’t expect godly principles from worldly people. I was at peace! I had the truth and all the feelings I felt for so many years made sense. I had felt neglected, that I didn’t fit in; I didn’t belong. I didn’t have any friends; I always kept to myself, that way I would avoid being judged. I was depressed, and I felt alone. All of those feelings left me when the truth came into light. I didn’t fear people anymore, God just blew His love  into my heart for people and souls, a love so deep you really get to understand why Jesus gave His life for us.

After that when I had my alone time with God, I just sat and cried, not for what my father did, but for what God did. I asked God, “Father how could you love and care so much about a fetus  that hadn’t drawn a breath yet or made it into this world?” He responded, “I have loved you before I put you in your mother’s womb.” I am still amazed by God’s love and mercy.

Because my mother protected me so much, I never knew my family on my father’s side. I knew  I had an older sister and that my older brother had passed away. Since I was a child, I searched for them, but couldn’t find them. So I gave up, until one late evening, playing around on Facebook, I thought, “well, let me look one more time.” I found a woman with the same names as my sister, and my aunts and uncles were on her Facebook friends list. I sent her a  message. It was my older sister! In December 2017, I met her, 2 weeks after I contacted her, and then a few months later, I met one of my aunts. They didn’t know about the abortions, but I  got to know my father through their eyes, through their stories. I met them at the right time,  God’s time. When the truth came into light and I had my alone time with the Lord, He just blessed me with a new family, that loves me, for who I am. 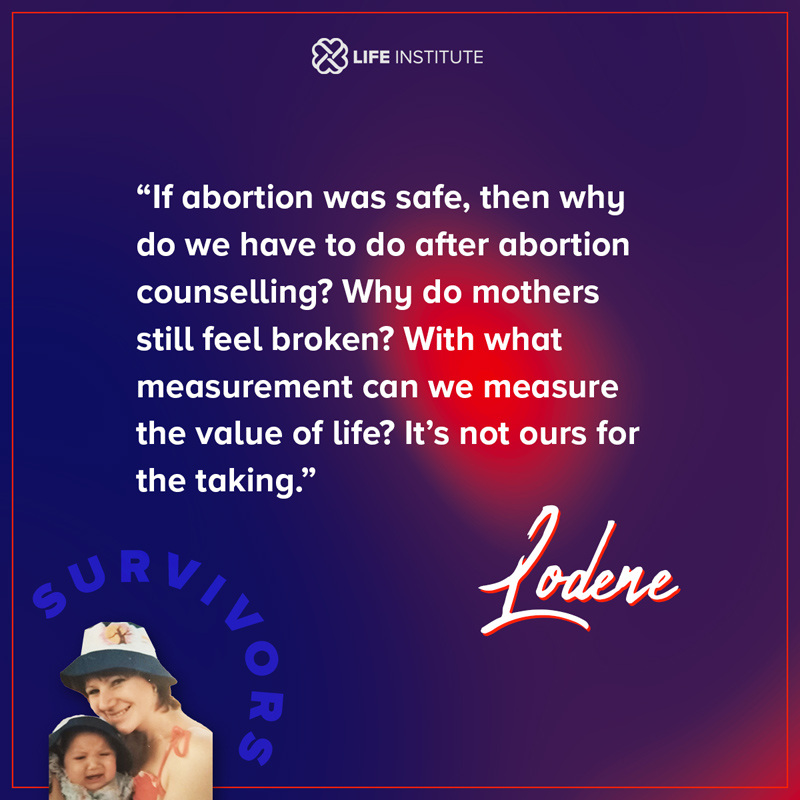 Before I knew the truth, as a child I was angry toward my father, and I didn’t know or understand why. There were times in my heart where I had fights with him, although he had died. I knew there was something wrong, but then one day I knew I just had to forgive him, although I didn’t know why. If I was to be free, I had to. And then, when the truth came out, all those emotions made sense. Because I wasn’t angry at him but felt sorry for him and still honour him as my father, I was free.

I wasn’t supposed to be here, not with 3 attempts at abortion, but I am. I wasn’t supposed to tell this story, like many others, but I can and I do. His grace and love is enough for me.  God loved the idea about you so much, He just had to create you!  It’s that simple! Don’t steal life for it is not yours for the taking.

3,262 girls age between 10 and 14 gave birth in 2018 in South Africa. I am not going to throw stones of sins, because it is not my place. But I want to educate the youth about abortions, and provide counselling. We need the truth because God is truth  and we need healing. We need to listen to the beating hearts of innocents.

We think it is only women and the unborn that are affected through abortion, but it is not.  Men are also affected. We don’t think of the fathers of these children. We really need to stop  and think about this for a second. Not all fathers want their children to be killed, yet they don’t have a say. Many fathers don’t even know that the woman is pregnant.

I love my parents and I do honour them for who they are and God wanted me to have them as my parents, and yes, my dad made the wrong decision, he was still young and no one told him about the impact that the abortion would have. Many people make this decision because they are not educated. I honour my mother, for she did not only save my life but my generations to come. She is my warrior for life.

As an abortion survivor, here is the truth. I was there, I was the baby. Yes, I did feel it. Yes, I did feel the emotions. Yes, that decision did have an impact on me for the rest of my life, because life was granted to me so that I can share this with you.

May my testimony also bring life to others, as life was given to me by grace and mercy.

Yes, God cares for babies and yes, even in the womb He protects. This powerful testimony is my story, a story of God’s grace and mercy and I want to share it with the world because God  creates life. He even protects it. God heals the broken hearted. He adopts the rejected ones. He breathes life into outcasts; He turns hearts of stone into hearts of flesh. He forgives  all sins and make us like new-the old comes to past and fades away, never to be thought about  again. Nothing will tear you out of the hands of the Lord. 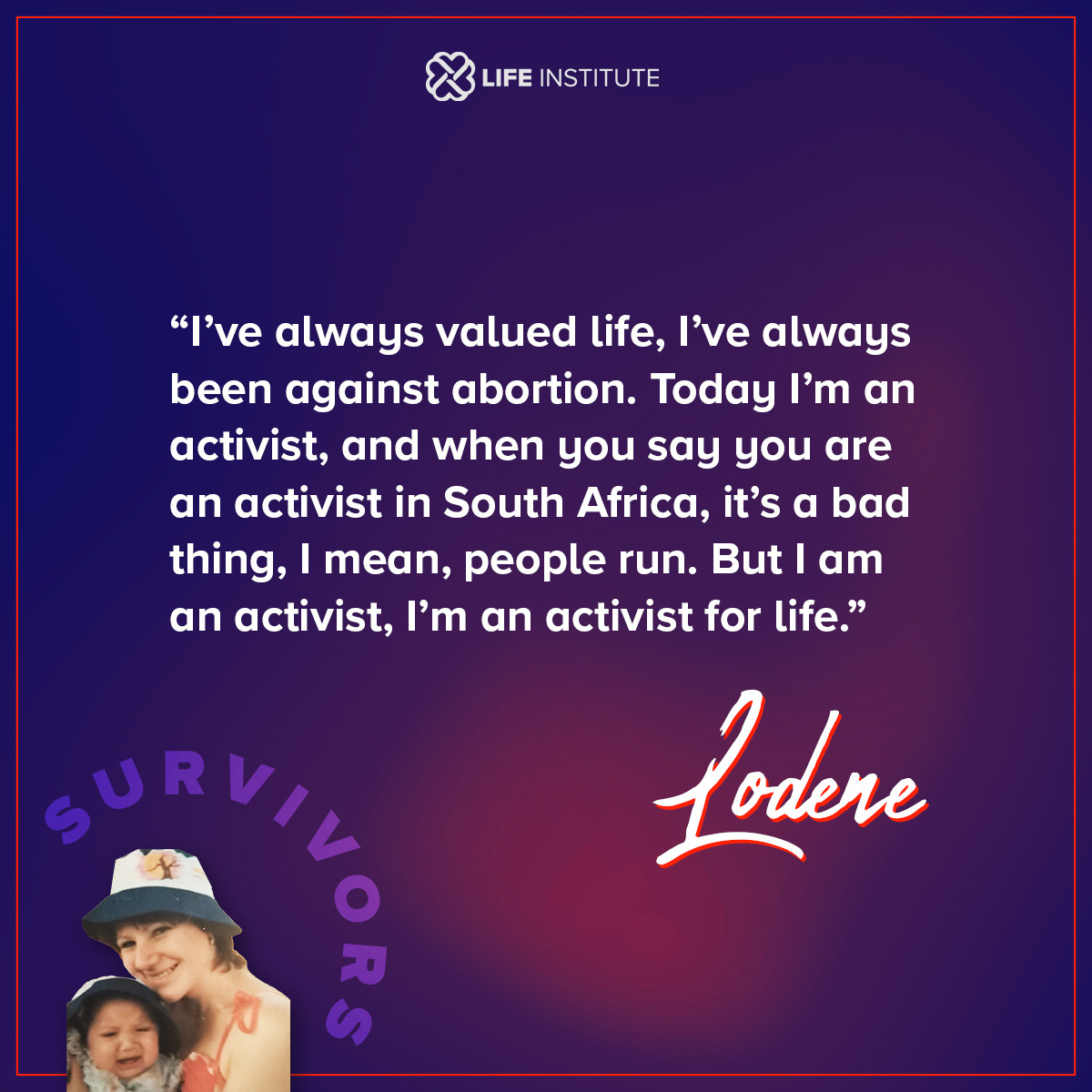