Lisa Peterson-Bender was 11 weeks' pregnant when she found the malignant lump - and it left doctors with a daunting dilemma:

Treat the mother or protect the unborn baby?

To be diagnosed with breast cancer is a terrifying prospect for any woman - but, as one mother-to-be discovered, it can be even worse if you are carrying your first child. Lisa Peterson Bender, from Minneapolis, Minnesota, was 11 weeks' pregnant when she discovered a lump in her breast. 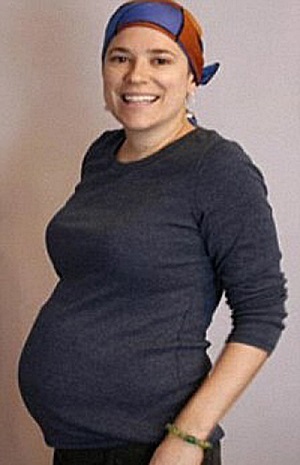 It turned out to be Stage Two breast cancer, leaving her and husband Ryan, both 32, with a medical dilemma: treat the mother, or protect the unborn baby.

But while women would have been advised to terminate the pregnancy in the past, Mrs Bender's doctors recommended surgery, followed by a course of chemotherapy that would allow her to keep the baby.

The aggressive treatment caused her hair to fall out, but pictured a week before her due date, the Benders' baby has remained in fine health. Speaking on the Today show after their final scan, the couple revealed their relief that the unborn child, a daughter, had survived.

Emotional struggle: Mrs Bender, who is a keen marathon-runner and advocates a healthy, organic lifestyle found her treatment a hard concept to accept Father-to-be: Ryan Bender admits that his wife's cancer battle won't be over after the baby is born

'This was the last check after chemo to see how her growth was doing.

'We got to see her hair. For me, it just symbolised that she had been protected from the chemo, because I lost most of my hair in treatment.

'The fact that she had hair made me feel like she was OK. That my body had done its job and protected her... I'm just so excited. I just feel like she's such a survivor already.'

The couple admitted in the interview that the diagnosis had been hard to accept. Mr Bender, a software engineer, said: 'I had a bad feeling about the lump in her breast the moment I felt it.

'I remember that pause - that moment of pause that was just like... really? No, this can't be...'

His wife, a city planner, heard the news while driving home from work. 'We were devastated,' she said. 'I went through every form of emotion. I was yelling in the car, "No, no, no!"'

Philosophical: The mother-to-be, pictured early in her pregnancy before she lost her hair, and after, at eight months, is looking to the future

The mother-to-be, who is a keen marathon-runner and cyclist and advocates a healthy, organic lifestyle found the cancer treatment a hard concept to accept.

Research has found that certain chemotherapy drugs, such as Cytoxan and Ardriamycin, which were used in Mrs Bender's treatment, are safer during pregnancy because the drug molecules are too large to pass through the placenta, thus less likely to affect the unborn child.

'It's really a matter of my health, my life,' she explained. 'But emotionally it was so hard to think about putting poisonous chemicals in my body.

'I had given up caffeine, I was trying to eat really organic food and then I was going to do chemo?

'The purpose of chemotherapy is to stop cells from growing.'

Her husband added: She wants to protect the baby, in some cases to her own detriment.'

Though the couple have had a grueling time so far, their battle won't be over when the baby is born later this month. Mr Bender explained: 'Once the baby's here then she'll really be able to hit cancer with everything we can.

'All the drugs and radiation and everything that are in the arsenal that we can't use right now... I want to make sure the baby has a mommy.'

'And having children is such an important part of that - for me, for my husband and I.'