A woman defied the odds - and medical advice - by giving birth to a healthy baby she had carried just outside her uterus. Doctors had thought Nicollete Soto, 27, from Phoenix, Arizona, was carrying the foetus in her abdomen, completely outside her womb.

She was warned that carrying her child to full term could risk both their lives. But Miss Soto was adamant she wanted to keep the baby.

'We took a risk,' Miss Soto's boyfriend, Victor Perfecto, told the Arizona Republic. 'We left it for doctors to decide when to deliver the baby and God to decide everything else.' Baby Azelan Cruz Perfecto was delivered by Caesarian section at 32 weeks, weighing just 2lb 14oz.

Although premature, doctors at the Banner Good Samaritan Medical Centre say he is healthy. Before birth, the baby was in a dangerous position - held between just a thin wall of membrane and muscle just outside the safety of his mother's womb.

Doctors needed to operate at just the right time, giving the baby long enough to survive without his mother's support; but not waiting so long that his protective bubble would burst - killing both mother and child.

But after the delivery doctors found Miss Soto didn't have an abdominal pregnancy, as had been feared.

Rather, the embryo had attached itself to the delicate area where the fallopian tube meets the uterus, what is known as a cornual or interstitial pregnancy. The placenta was not attached to a vital organ but was instead mostly attached to a uterine wall, making its removal much simpler than doctors expected.

Nevertheless, survival rates for such pregnancies are low, and doctors were astounded that both mother and baby made it through.

Dr. Curtis Cook from Phoenix Perinatal Associations told myfoxphoenix.com: 'It's very unusual, she's very fortunate and we are pleased that she and the baby are doing well. 'To her credit, she absolutely wanted to push through even it was putting herself at risk.'

Although teams of vascular, trauma, urology and radiology surgeons were on hand in case of an emergency, they were not needed.

Miss Soto and Mr Perfecto both work, but neither has health insurance, so the unusual pregnancy was not discovered until 18 weeks after the couple qualified for state medical help. Doctors said that if the warning signs had been spotted earlier, they would have advised Miss Soto to have a termination as risk of rupture and blood loss would have been too great. 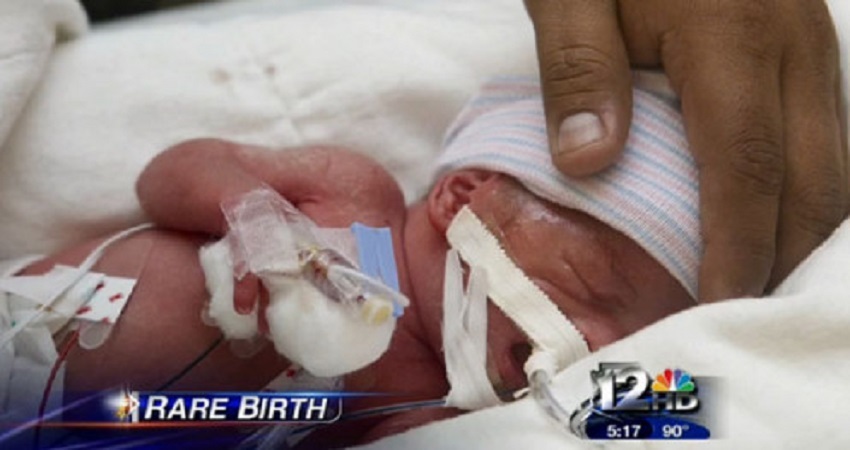 But removing the fetus at such a late stage would have been tricky. Surgeons might have to remove her uterus or cut out a part of her bowel.

If the placenta had attached to an vital organ, doctors would have to perform delicate surgery to detach it, or give Miss Soto a drug used in chemotherapy to kill the remaining tissue.

In the end the only abnormal outcome of the delivery will be a larger than usual abdominal scar. The baby is expected to remain in hospital for three to four weeks, while his mother will be at home in a few days.