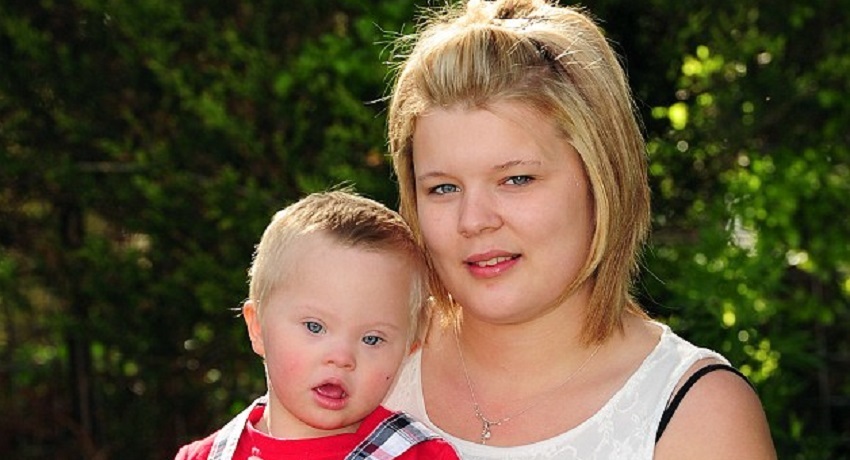 A teenager who became the youngest mother in Britain to a Down’s Syndrome baby after falling pregnant aged 15 has spoken of her pride in proving her doubters wrong. Despite being just a child herself, single teen mother Catherine Moore, now 19, refused to give her baby up after learning he had Down’s Syndrome, vowing to raise him herself despite concerns that she wouldn’t cope.

Recent figures show up to 90 per cent of Down's babies are aborted - a figure which Catherine finds distressing.

Catherine Moore, who fell pregnant at the age of 15 and then went on to have her son Tyler who had Down's Syndrome, loves every second of being his mother

Now as her son starts pre-school aged three she wants to pay tribute to the little boy that, far from ruining her life, she says may even have saved it.

Everyone said I wouldn’t be able to cope and my life was over if I kept Tyler.  But they were wrong, having Tyler was the best thing that ever happened to me. He changed my life for the better and I am so grateful to have him.

I was going off the rails but he saved me. We are a team and I am so very proud of him. When he came along I was just a child myself and suddenly I had a child of my own with special needs. But I never once thought of giving him up.'He needed me and I needed him, it was as simple as that. I could never be without him and he is quite simply the most wonderful thing ever to happen to me, he really is.

‘I hate it when people say they are sorry he has Down’s because I am not. It’s who Tyler is and I would not change him for the world. I’m so glad I had a Down’s baby.'

Catherine wasn't initially told about Tyler's condition and when her mother broke the news to her, she vowed to love him even more

Catherine was weeks away from her GCSE exams when aged 15 she learned she was pregnant after splitting up with her boyfriend.