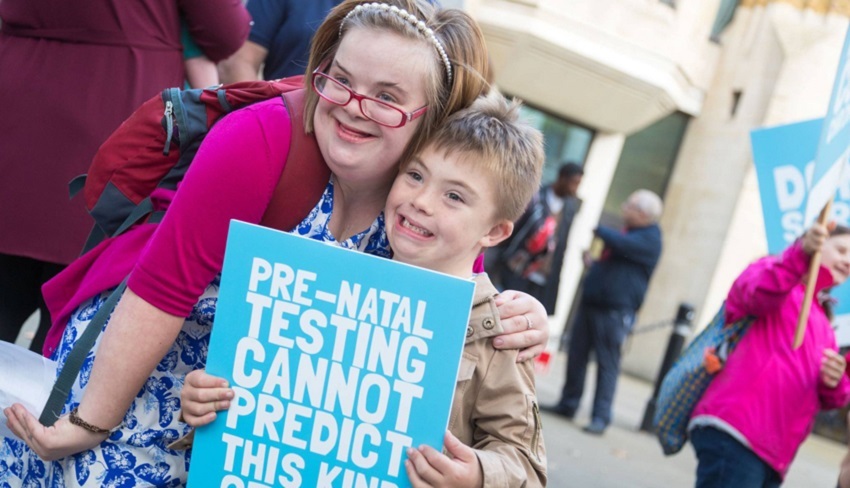 The mother of a little girl born with Down’s syndrome says despite her initial heartbreak she opposes screening for the condition because it may encourage abortion. Heidi Crowter was diagnosed with Down’s soon after she was born. Her mother Liz, who already had two healthy sons, says she initially felt “nothing” for her new baby.

However, when Heidi became seriously ill at just a few weeks old Liz and her husband Steve found that their feelings changed completely. Liz recalls in an interview with the Mirror newspaper

Suddenly we wanted Heidi to survive more than anything.

Scientists are currently working on a new blood test for Down’s syndrome that carries a lower risk of causing miscarriage than the one currently available. Liz decided not to have a Down’s syndrome test when she was pregnant with Heidi, and says despite the “trauma” of discovering Heidi’s condition she still opposes testing and believes it can encourage abortion.

We all hope to have a perfect baby, but a life is a life,” Liz says. “Just think, if your child was struck down with meningitis and left disabled or brain damaged you wouldn’t end their life – you’d love and care for them.

“When my sons Dan and Tim were born I felt a rush of pure love. But with Heidi I felt nothing. Cuddling her just didn’t feel the same.” She adds: “I went through the motions with Heidi, feeding her, cuddling her, but I didn’t have that same unconditional love for her I had with my boys”.

Instead I was grieving for the daughter I knew she’d never be. She’d never be able to get married or have children. However, after a leukaemia scare and further health problems the couple were told that Heidi might only have 24 hours left to live.

“Heidi was lying in her hospital bed and, all of a sudden, both Steve and I felt this overwhelming love for her that we hadn’t experienced before,” says Liz. “We suddenly desperately wanted her to survive.” “We nearly lost her again a fortnight later when she stopped breathing and doctors had to resuscitate her”, she continues.

“They told us after they had managed to bring her back to life again, that she’d looked up at them and smiled from ear to ear.” Steve says: “She’s 14 now and goes to mainstream school”.

He adds: “She can read fluently – we have a lot to be thankful for.” “It’s painful to remember how we felt when she was born and how we wished she wasn’t here”, Liz admits.

“But now she’s so full of life and we feel privileged to have her as our daughter.”