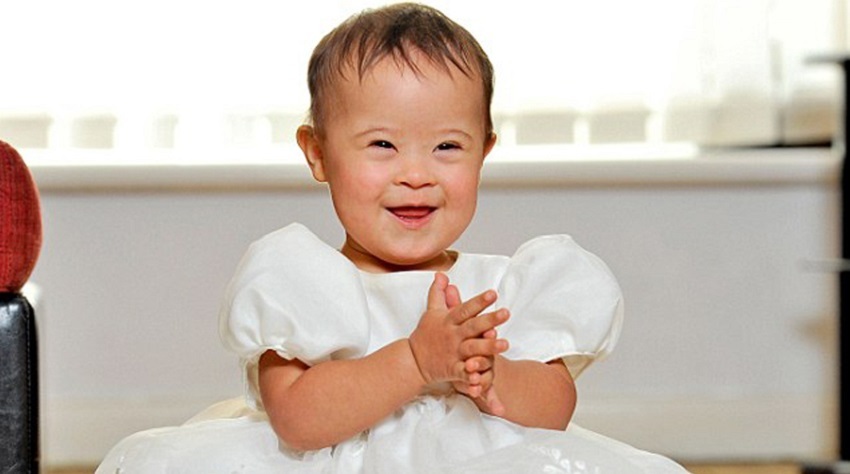 Taya's devoted mum, Gemma Andre, couldn't be more proud. 'I always believed my daughter was stunning but I thought, "I'm her mum. I'm biased,"' she says. 'When people say "poor you" I find it offensive and irritating,' said Taya's mother Gemma

The camera just loves little Taya Kennedy. Wide-eyed, cheeky, engaged; she brims with the confidence of a natural performer. It is little wonder that she has taken the child-modelling world by storm. 'When the agency rang me and said, "We want her on our books. She's absolutely beautiful", I was delighted.

'I asked them if they were aware she had Down's Syndrome. They said: "It's immaterial. We've accepted her." At that moment I burst into tears. I was overjoyed, not so much because Taya was going to be a model. More importantly, she had competed on equal terms with every other child and succeeded.

People can be really negative about children with Down's. They say they can't do this and won't be able to achieve that. It's incredibly frustrating. Someone said to me the other day: I suppose she'll never be able to live an independent life, and I said, Why on earth not?

When people say "poor you" I find it offensive and irritating. The way I see it, some people cannot even have children and God has given me this special child.The story of Taya, her single-minded mum and proud father Robbie Kennedy is an uplifting one. Gemma, 29, a mortgage adviser with Santander, has never accepted that constraints must be imposed on her daughter because she has a disability.

She refuses to countenance the negative and believes that her only child is capable of achieving any dream, however elevated.

'Her father and I want her to go to an ordinary school, too. After her birth, I was given a list of things she wouldn't achieve; accomplishments she could never hope to master.

'It was so dispiriting. I was told her teeth would not all develop. But already she has seven baby teeth. I was warned she would be slow to speak. But she already says "dad, mum, nana, cat and ta".

So now I take no notice of what the experts say.'And I am determined Taya will have as many chances in life as any other child. I want her to go to dancing school. She loves music and has a sense of rhythm; she sways and claps her hands when I sing to her.

'After her birth, I was given a list of things she wouldn't achieve; accomplishments she could never hope to master. It was so dispiriting... Now I take no notice of what the experts say,' said Gemma

'I'm already saving for her to have driving lessons. I have a fund for her to go to university. I want to prove to Taya that any goal in life is attainable. It doesn't matter that she has Down's Syndrome. She can still achieve. I want her to be an inspiration to others.'

If Gemma sounds optimistic, it is because Taya has already defied so many of the experts' other predictions about her future too.

And it was quickly evident that Taya loved the camera. The pictures of her, mesmerised by bubbles, chuckling with glee, resplendent in a frothy white dress, are entrancing. I wonder if we will see her one day modelling on a catwalk?

Gemma laughs. 'Taya is an amazing child,' she says. 'I suppose anything is possible.'