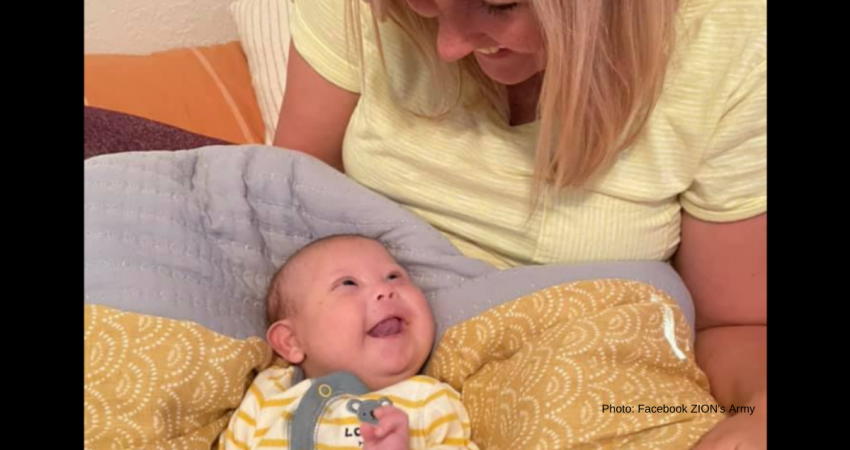 The National Down Syndrome Society (NDSS) has called for a legislation that would prevent people with Down's Syndrome from being discriminated against when needing life saving medical procedures, after a 4 month old baby passed away as a result of being denied a heart transplant.

According to Live Action, Baby Zion was born on 15th June 2021 to parents Josh and Bobbi Sarmiento, in Florida, U.S. He was born with Down's Syndrome, and with a complete atrioventricular canal defect (CVAC), which is a large hole at the centre of his heart. It is not uncommon for children with Down Syndrome to have CVAC, and open-heart surgery is often able to repair the condition.

Surgery for baby Zion was arranged for 20th September, when he would be three months old. However, before the surgery, baby Zion suffered cardiac arrest and was placed on life support. He underwent 5 surgeries in 12 days, where it was found that his best hope for survival was a heart transplant. Baby Zion's family contacted numerous transplant centres, but all turned them down claiming it would be a “waste of a heart”. Sadly, baby Zion passed away on 8th October 2021 at 4 months old, as a result of not receiving this life saving surgery.

After news of Zion's passing, the National Down Syndrome Society (NDSS) released a statement urging for a legislation that would prevent this kind of discrimination from happening to a child with Down's Syndrome again.

“We are deeply saddened to learn of the passing of Zion Sarmiento, an infant with Down syndrome who was denied the heart transplant he needed to survive,” the NDSS wrote on a Facebook post. “Our team has been in touch with Zion’s family in Florida, and we are working closely with them and others to advance policy and practices that ensure people with Down syndrome have equal access to life-saving organ transplants. Stories like Zion’s are why NDSS advocates for state-level legislation and why we have championed the Charlotte Woodward Organ Transplant Discrimination Prevention Act (H.R. 1235) in Washington, D.C.”

They also urged people to take action against this kind of discrimination by contacting Congress, and invited them to join Zion's Army on Facebook.

“Together we can ensure the rights of all individuals with Down syndrome,” they said.

In addition, babies with Down's Syndrome face huge challenges before they are born. Sadly, 90% of babies diagnosed with the condition are aborted before birth in jurisdictions such as the United Kingdom.