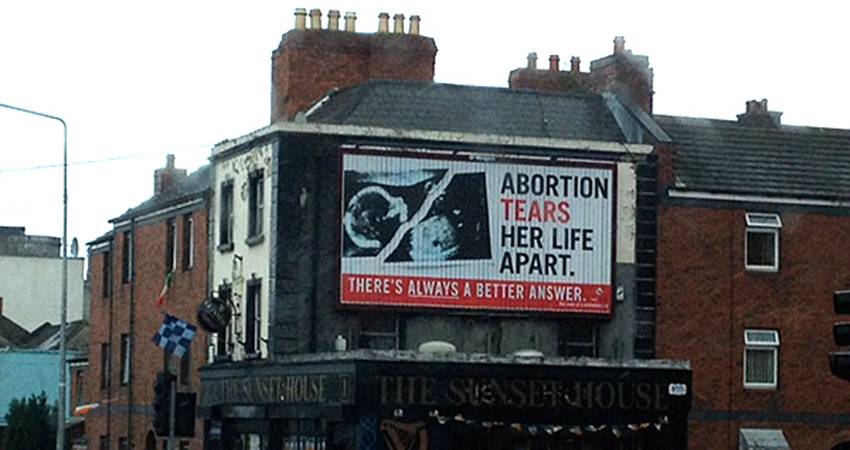 Pro-life groups launched the biggest widespread information and awareness campaign ever seen in Ireland on the abortion issue. Adverts will be used nationwide to carry a striking pro-life message that explains how "abortion tears lives apart" and why "there is always a better answer

An accompanying ground campaign has signed up almost 2000 volunteers to reinforce the message and calls on Fine Gael to 'keep the pro-life promise' it made during Election 2011. The campaign will also have a strong online dimension using Facebook, You Tube and other online forums.

The Better Answer campaign was launched at Dáil Éireann on Kildare Street on Friday. It aims to create new levels of public awareness and to raise up the pro-life majority, and is inspired by one woman's experience with abortion and it's aftermath.

"Last year I had a very moving conversation with an Irish woman who underwent an abortion while living in Britain years before," said Niamh Uí Bhriain of the Life Institute, who are co-sponsoring the nationwide campaign with leading pro-life organisation, Youth Defence. "She told me that she felt her life was torn apart by the abortion, and that her baby's life was torn apart as well. I thought it was a powerful description of the reality of abortion, which is all too often glossed over in the debate on the issue."

*Pic of young woman in billboard posed by model

Billboards, bus sides, metropanels and luas adverts will carry the powerful image of a ripped up photo and the accompanying message: 'Abortion tears her life apart: There is always a better answer.' A short online message will also be featured on transmission screens in busy train stations.

"The truth is that abortion kills babies and harms women, and we're using this campaign to put that reality back into the debate," said Ms Ui Bhriain. "This campaign will be rolled out over the entire summer and will also feature a major pro-life Rally and Roadshow. Mothers and babies deserve better than abortion and we need to raise up the pro-life majority to ensure that abortion is not foisted on the Irish people by the European Court or abortion advocates in the Labour Party."

Rebecca Roughneen of Youth Defence said that "Labour continue to slide in the polls as their support for abortion grows more strident," but she said that Fine Gael needed to stop hiding behind 'expert committees' and European Court rulings and remember their obligation to the Irish people who would be asking them to keep the commitment they made not to legalise abortion in Election 2011.

"This campaign also aims to wake up the pro-life majority and urge them to make their voice heard before abortion is legalised by a wealthy and powerful elite who want, at all costs, to avoid consulting the people".

"The Irish people know that we can do better for mothers and babies than the medieval solution of abortion," she said. "The UN has shown that Ireland, without abortion, is the safest place in the world for a mother to have a baby. Let's keep it that way."

For more on the campaign, check out