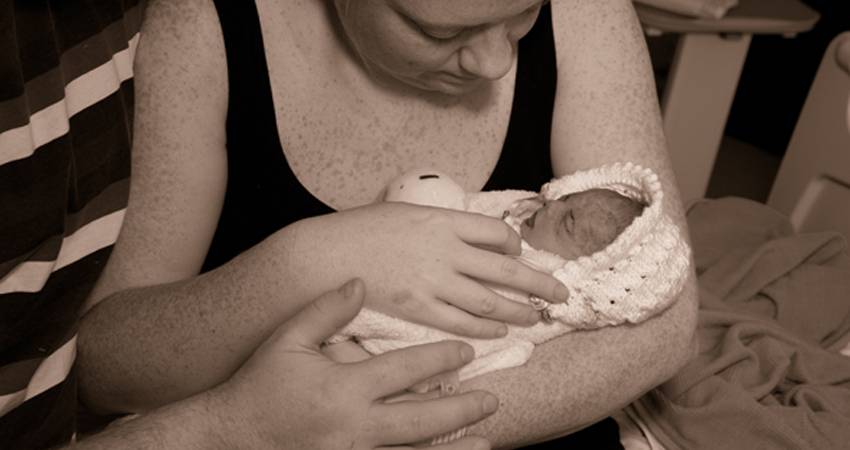 Several important media interviews this past week have focused on the right to life of babies diagnosed with life-limiting conditions in the womb, and the urgent need for better perinatal hospice care.

The BBC reports that Gemma carried a baby girl, Lily Rose, with trisomy 18 to 32 weeks, and is now seeking wants better support for mothers and families in a similar situation.

Lily Rose with her mam and dad

“She feels so strongly about the issue that she and her husband David have been lobbying politicians at Stormont, but she says that in spite of contacting all of the political parties some have not replied. “The couple say that even though they knew their baby had a life-threatening condition they were glad they had continued with the pregnancy and got the chance to hold their daughter, Lily Rose. “She says she believes fewer parents would opt for an abortion in Northern Ireland if there was better support available. "What I would love to see happening is more counselling for mothers and fathers like us, more supports from the health trusts, a designated suite for any family that's going through what we went through, and support after bereavement," she says. Tracy Harkin told BBC that "The provision for hospice and palliative care is patchy, not standardised, depends where you live and the individual medical team and the hospital you live closest to and that is not good enough." Both women also appeared on BBC NI radio to discuss the situation and call for better care where baby is diagnosed with a life-limiting condition in the womb.

On Tipp FM during the week, Tanya Coonan, spoke about her beautiful daughter Lillie, who lived for just 2 hours after birth, but who fought so hard to say  come and say ‘hello and goodbye’ to her parents.

Lillie with her grandmothers

She also explained why the comments of Sabina Higgins caused so much hurt, and pointed out that the ugly phrase ‘fatal, foetal abnormality’ is misleading and offensive, and is not a medical diagnosis.   “There is no condition whatsoever where a doctor can say that a baby will not live until birth – I was told when we got the diagnosis at 13 weeks that she wouldn’t survive that week, but she did,” she said.   Tanya explained that abortion was suggested to her, but that she believed every child has a right to life, and that she wanted to give her baby that chance. “It was unconditional love. It was immense pain, but also immense love, I was so proud of her, she is my little fighter, she came to say ‘hello and goodbye’ and she brought so much love into my life”.

Mandy O’Neill from Cavan also spoke to the Anglo Celt regarding the abortion call made by Sabina Higgins and said that the language used by the President’s wife was ‘very upsetting’ and ‘uneducated’.   Mandy shared the story her baby girl, Carragh, who she said ‘had a life inside of me for 38 weeks’.

“That was her little life, and although it was too short, it had meaning and she deserved the best possible chance,” she said.

Ms O’Neill said that phrases like ‘fatal, foetal abnormality’ made women feel they were carrying ‘something abnormal’ but that her baby was beautiful.

“She was absolutely perfect, she was beautiful, really beautiful. She was a sick baby, but she was my baby,” she said.