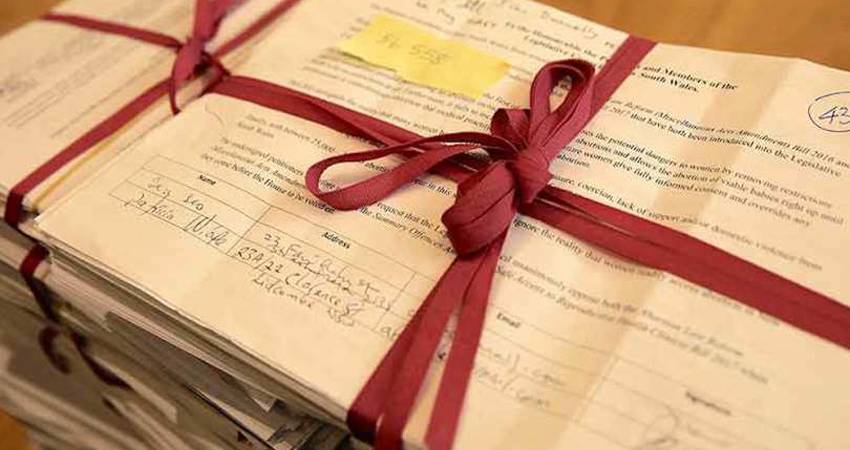 In Australia a major victory has been scored against radical abortion bill and the New South Wales Parliament has been rocked by one of the biggest petitions ever presented to it. There were gasps in the parliament chamber as Greg Donnelly MLC had staff members carry in the document boxes containing the almost 60,000 signatures while he was tabling the pro-life petition in the The Legislative Council (upper house) of the New South Wales Parliament.   The petition was in response to the abortion bill tabled by the Green Party MP Mehreen Faruqi‏ which would have not just made abortion unrestricted but would have prevented pro-life campaigners from even standing near abortion clinics.  This restriction would make abortion clinics a uniquely privileged entity in Australian law, copying attempts to favour abortion clinics in other jurisdictions.

What makes the size of the petition all the more extraordinary is that the signatures were collected in a brief fourteen day campaign. Rebecca Gosper, the young student who was the petition coordinator, got together with some friends to put up a Facebook page and the petition took on a life of its own, far out stripping the young friends’ expectations. The two weeks of frenetic activity that followed saw the petition average 180 signatures every hour.   The campaign quickly reached 160 churches rather than the expected dozen but also reached out to community groups, sporting organisations and even to shops in county towns that helped collect signatures. “People were really receptive in that regard and were keen to do something practical to make a difference in New South Wales” Gosper said.  The huge popularity of the pro-life petition and the fact that it was not confined to churches strikes a very direct blow at pro-abortion propaganda which attempts to paint anti-abortion activism as a religious minority activity.   Gosper was exhausted after working 18 hour days in the chaotic two weeks but delighted with the unexpected triumph. She believes the short time frame was a help, spurring people on because they saw an opportunity to lay down a marker. “It was amazing to see how well people responded when they were given the chance,” she said.  Rebecca is a member of Youth For Life, a grass-roots movement of Australian young people who believe that all humans should be treated with equal dignity and granted equal rights. Activists say that a strong pro-life youth initiative was inspired by the Irish pro-life group, Youth Defence, more than a decade ago.   After the first weekend, Youth for Life had thought that the campaign might reach 15,000 signatures but the forms kept arriving and then with forty eight hours to go volunteers texted her that the total was at 49,000 with more forms coming in.    Faruqi had her own online petition running for the bill since November 2015 and there was a second unofficial petition which has collected a mere 2028 signatures. Faruqi's bill was doomed in any case. It's extreme nature had alienated even pro-abortion MPs and the Liberal Party were intent on voting the bill down in the upper house to prevent it becoming an issue in the parliament's lower house before the next election.   The so called The Abortion Law Reform (Miscellaneous Acts Amendment) Bill 2016 was defeated 25 to 14 in a conscience vote while supporters screamed in rage from the public gallery.  So deeply flawed was the bill that that pro-abortion MPs rounded on Furqi criticising her for the harsh setback to their cause. Walt Secord, the pro-abortion Shadow Minister for Health, said of Furqi “Because of her approach, this important bill, and the whole area of abortion law reform, is likely to fail”   This will be very good news for anybody who cares about the rights of the unborn.