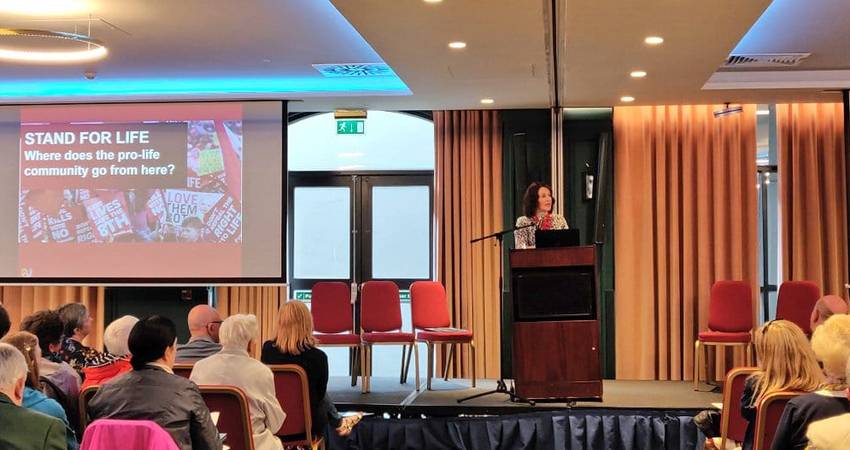 Last weekend, on May 25th, the Irish Catholic held a pro-life conference in the Alex Hotel in Dublin which heard from a range of speakers, including Niamh Uí Bhriain of the Life Institute, about making a pro-life future a reality.

Maria Steen of the Iona Institute said that while "one year ago today was the lowest point in our nation’s history" she felt for the pro-life community, the only way is up.

“I want to remind you that we’re in this for the long game, and that it is important that you take care of yourselves and each other,” she said. “It is time to regroup, to think prudently and carefully about how you choose to use your energy, your gifts for this cause," she told the crowd.

Niamh Uí Bhriain said that while the repeal of the 8th was heartbreaking, the time for mourning was over. She said the three biggest challenges ahead of the movement now was to:

1. Restrict the harm of the new abortion regime, both my supporting the work of groups like Every Life Counts and Gianna Care and also subjecting the legislation to endless scrutiny and persistent challenge.

3. Build a new media platform, since the absolute bias and campaigning fervour of the Irish media were the key factors in repealing the 8th. She said that a new platform Gript Media was already undertaking that challenge and that the initial results were encouraging. "There's a real hunger there for an interesting alternative to the endless, parochial groupthink in the Irish media," she observed.

Ms Uí Bhriain said that the despite the loss of pro-life protection, the future would eventually be pro-life because the future belonged to those who love their children.

Emma O'Connell of Gianna Care spoke about the sterling work being done by that organisation to help women in crisis, with over 270 babies saved from abortion in Ireland.

“This is a huge achievement for a group which receives no government funding or support, and is regularly attacked in the Irish media for its pro-life ethos,” she said, pointing out that following the closure of Cura, women in the West of Ireland had been left without and pro-life support in pregnancy.

Carol Nolan TD and Senator Rónan Mullen talked about the political challenges ahead, with Deputy Nolan TD looking at the examples of other countries. "When we look to other jurisdictions, we see that the tide is turning back toward recognition of the precious value of human life,” she said.

“They have seen the horror that emerges when the law is used to threaten human life instead of protect it. They have seen that what is often touted as freedom in fact leads to the worst kind of slavery and exploitation of women and unborn children."

You can read more about the conference here. https://www.irishcatholic.com/from-hurt-to-hope/