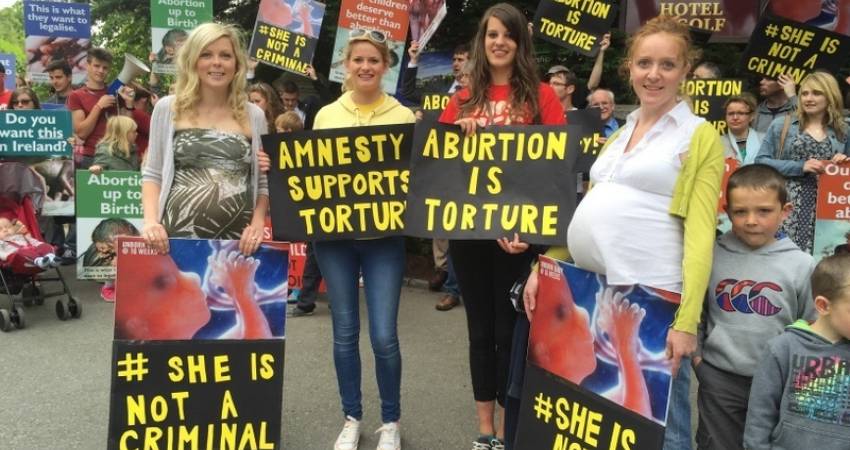 It’s been a bad week for abortion pushers Amnesty

Until fairly recently, Amnesty International did not have a policy favouring abortion, but all that changed when the organisation began to campaign for abortion in 2007, gradually broadening its position to support abortion on demand.

Many members felt that the new position was foisted on the organisation by a cadre at the top of the chain. In Ireland alone, large numbers spoke with their feet, reluctantly leaving an organisation which they had joined to protect human rights, but which they no longer felt part of because it was campaigning to deprive preborn babies of the most fundamental human right of all, the right to life.

In Co Meath, the entire Kells branch of Amnesty resigned, and many others spoke about their upset that Amnesty were not listening to their members on the issue. It was bullied through from the top down.

Now a shocking new report has confirmed that a toxic culture of bullying, discrimination and humiliation is rife in the organisation.

The report is the result of a major investigation undertaken by the KonTerra Group, which found that bullying and public humiliation was routinely used by the organisation's leadership.

It states that nearly 40% of staff have developed mental or physical health issues as a direct result of working at Amnesty International, and that staff described the environment in which staff do not feel that they are valued, protected, or treated with respect and dignity.

"Staff reported multiple accounts of discrimination on the basis of race and gender and which women, staff of colour and LGBTQI employees were targeted or treated unfairly," the Guardian reported.

Given the hectoring tone of Amnesty’s campaign for abortion globally, this does not come as a surprise. Anyone who disagreed with abortion was accused of denying women of human rights, while its reports claiming women were being harmed by pro-life laws played so fast and loose with the facts that doctors felt obliged to clarify that those claims were untrue.

“As specialists with significant experience in the field of obstetrics and gynaecology, we are shocked at the unwarranted and unfounded allegations made by Amnesty International in relation to obstetrical practice in Ireland,” wrote a group of senior medical experts.

In an organisation with appropriate checks and balances, this should have raised an alarm. In an environment where employees speak of ‘a culture of secrecy and mistrust, and where discrimination, bullying and abuse of power have been condoned’ concerns are often swept aside with damaging results.

One of Amnesty’s most high profile supporters in the campaign to legalise abortion in Ireland was actor Liam Neeson, who lent his voice to a bizarre video produced by the organisation featuring gloomy, misty graveyards and falling down churches and warning that the 8th was  harming women.  (The video was so unpopular that Amnesty was forced to hide its ratings after it received massive numbers of ‘thumbs down’ on You Tube).

This week, Neeson caused enormous controversy when he told a journalist he went out looking for a black person to kill following the rape of a close friend.

The actor’s red carpet appearances have been cancelled and he stands accused of racism in a storm that shows no sign of abating.

The authors of the report into Amnesty’s workplace culture said that the toxic environment they observed damaged Amnesty's credibility as a human rights campaign. Some might add that Neeson’s comments could have the same effect.

The truth is however that Amnesty’s credibility has been destroyed by its decision to campaign against the human rights of the most vulnerable of all people, preborn babies. You can be a human rights defender or a supporter of killing babies. One or the other, not both.