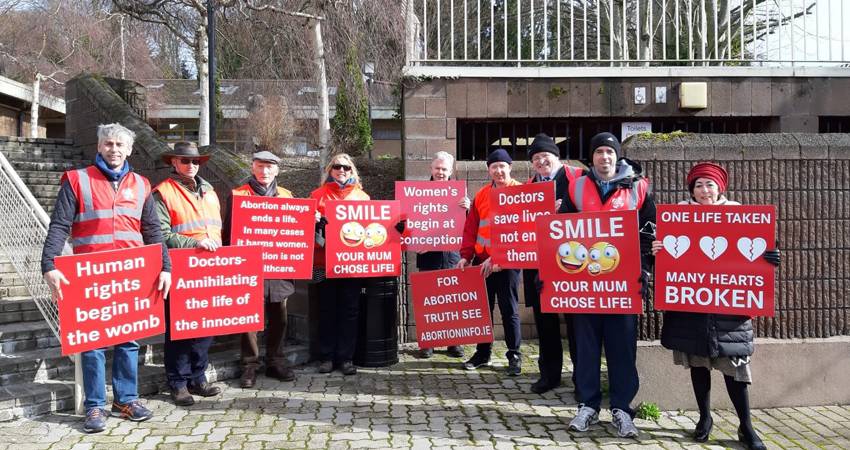 "We are not going away." Pro-life vigils at abortion centres share year of witness

Dún Laoghaire Pro-life, who are one of more than a dozen local groups organising the vigil, say the vigils are a community based, peaceful, approach, promoting the central tenet of pro-life which is, that every civilized society has the responsibility to protect and nurture human life at every stage of its existence.

"Two ‘healthcare’ facilities offering medical abortions – one in Goatstown, and one in Glasthule – were selected for the purpose of our peaceful vigils. They represent part of the 10% of GP practices around the country that have signed up to carry out medical abortions," they wrote.

"In 2018, the Irish people voted to remove from the Constitution, the right to life of all unborn babies in the womb, a right without which all other rights are meaningless. To add insult to injury to those of us who believe in the inherent dignity and equality of all human beings, had to endure the sight of celebratory dancing and singing in the streets of the capital as some of our fellow citizens embraced with visceral enthusiasm, this abominable ‘victory’ for the culture of death. The result of the referendum, came as a huge shock to all pro-life people, and it is no exaggeration to say that many of us suffered the effects which normally follow a bereavement.

"Thus, when Pro Life Dun Laoghaire met in the Autumn of 2018 , we allowed ourselves to express our grief first, before turning to the practicalities of our mission, which is to save lives, offer genuine, life affirming options to women, and to change hearts."

"The vigils take place on Saturdays when the clinics are closed, but the message is seen and heard by the neighbours and clients of the abortion centres. Our pro-life posters, remind people that, regardless of the law, the unborn are still part of the human family, and that it is not only our right, but our duty, as fellow human beings, to defend them.

"Our first vigil took place in early January 2019, outside Sheehan Medical Centre in Glasthule. The reaction from passers-by was generally favourable. Some expressed shock that abortions were taking place in their GP clinic. Others hadn’t realised that the two male doctors performing these medical abortions were being paid 450 euro per abortion, and as taxpayers, their hard-earned cash was being used to support the killing! Our witness outside these centres has even motivated some to change doctors. Shortly afterwards we assembled outside Goatstown Medical Centre. Again, our reception here was mixed. A local election candidate for People Before Profit took a video of us and circulated it on social media as evidence of the ‘fact’ that we were there to ‘harass’ women. The ‘fact’ that it was a Saturday morning, and therefore there were no women to ‘harass’, seemed to escape her notice! Outside both clinics we were heartened by the ‘beeps’ of approval we received from passing motorists.

"After almost a year, our vigils have taken root, and have become a major feature of the Dun Laoighaire pro-life. We are not particularly concerned that we have been the subject of vitriolic attacks by pro choice on social media; after all, It shows that we still have the power to provoke, and that, contrary to what they once thought, we are not going away!"

"The vigils have given us the opportunity to engage with the public, and a surprising result of that engagement is discovering the level of ignorance among the public as to what they voted for in May 2018. Some are under the misapprehension that they voted ‘yes’ in order to support women who have been raped or whose lives are in danger. Others have registered shock when told that abortion in this country can, in theory, take place up to birth. One man who admitted to having voted ‘yes’ simply refused to believe us when confronted with the reality to which he assented. Experience has taught us that language and thought are intertwined, and that by changing the language you can change the way people think.

"Abortion was marketed under the name of compassion. Sadly, the Irish people were duped by this outrageous inversion of truth. Perhaps when they eventually realise that they were  seduced by lies into dismantling incrementally, their fine and noble Constitution, their anger will act as a stimulus to return our country to a truly compassionate, prolife nation."