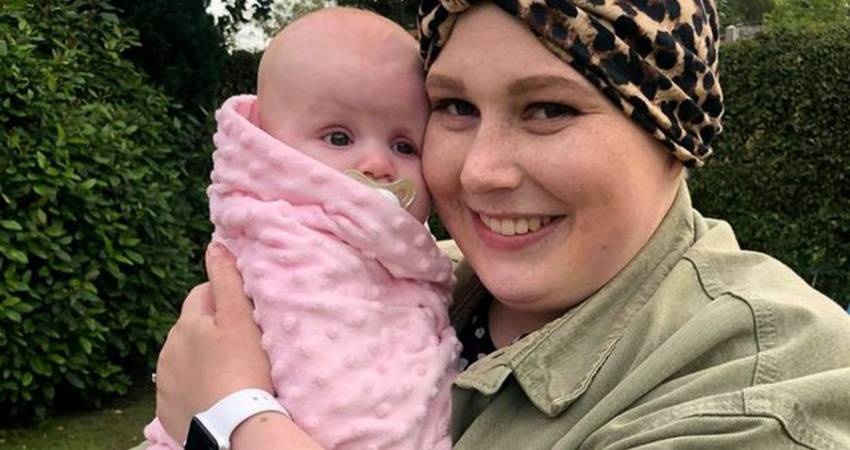 At 16 weeks pregnant, Ellie Whittaker was diagnosed with stage 2 Hodgkin's Lymphoma. Doctors advised her to have an abortion or to delay treatment, even though studies have shown that women can be treated for cancer during pregnancy without harming the baby. These studies discovered that chemotherapy after the first trimester is not harmful to the baby. Researchers concluded that women do not need to abort or to delay cancer treatment, but need to be fully informed of their treatment options instead of being offered abortion.

Ellie bravely rejected abortion and opted to delay her treatment until her daughter was born. After six months of treatment, Ellie has received the all clear.

In April 2019, Ellie miscarried her first child. The following July, the 21 year old from Bolsover, Chesterfield, went to her GP after discovering a lump in her neck. Around that time, she and her fiancé, Kieran Marriott, 22, discovered that she was pregnant again. Ellie underwent a scan and biopsy at Chesterfield Royal Hospital in August, where in October, she was diagnosed with Hodgkin's Lymphoma by the Macmillan Cancer Unit. An MRI scan confirmed she was at stage 2.

Doctors told Ellie that starting treatment whilst she was pregnant could harm her baby, even though the most recent studies have shown that most cancer treatment don't harm the baby, especially after the first trimester.

Her options were to either abort her baby to start treatment immediately, or to delay her treatment. After experiencing her miscarriage, abortion was not an option for Ellie. She courageously chose to delay treatment.

“I didn’t know I was pregnant but losing the baby made us realise we were ready to start a family.” She told Birmingham Live. “The doctor advised I have an abortion because cancer treatment could cause problems for the baby. There was no way I was going to give her up so I chose to delay it.”

Ellie received a scan every two weeks after being referred to the Royal Hallamshire Hospital in Sheffield. Her doctors planned to begin treatment when Ellie was 27 weeks pregnant, but due to her doing so well, they waited until the planned c-section at 37 weeks.

Connie Marriott was born on 18th March 2020, and Ellie began treatment almost immediately. At this point, the cancer had progressed to stage 3.

“I tried to spend as much time with Connie as I could before I started. I remember crying and thinking I wouldn’t be able to be there for her. I knew the chemotherapy would take its toll. But when they scanned me the cancer had progressed to stage three - it had spread to my stomach and spleen.”

She underwent 12 rounds of chemotherapy ending in September. At her fourth round of treatment, Ellie discovered she could drop one of the drugs she was taking as a scan showed that she was responding well to treatment. A PET scan in October confirmed that Ellie had the all-clear from her cancer, and the doctors believed the cancer is unlikely to return.

"I lived with it for so long it's weird that it's finally gone - I can't believe it.” She said. “Everyone’s supported me in many ways. I had to wait two weeks for the results from my final scan which was agony. I'm so pleased it's gone and I can focus on being a mum.”

“Connie’s an amazing baby - she started teething and trying to sit-up. She’s the quietest baby and sleeps through the night. I wouldn’t change her for the world.”

“I don’t regret my decision and I’d make the same one again given the choice."