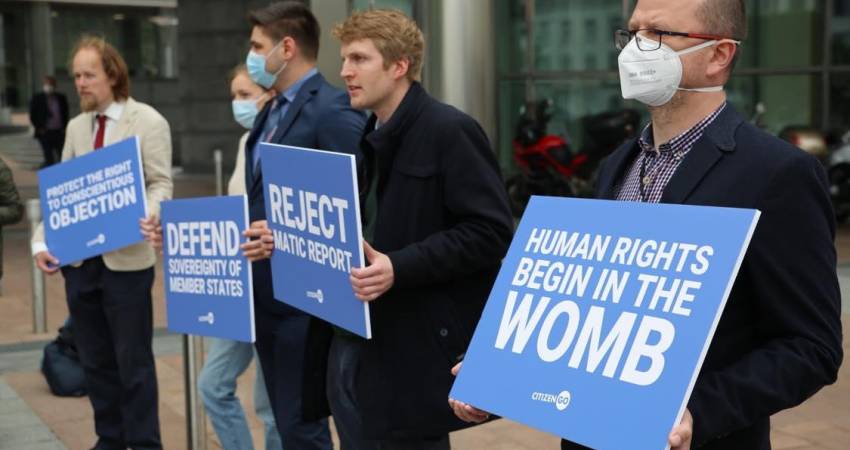 The European Parliament has voted in favour of an extreme pro-abortion report, known as the Matic report, that calls for abortion to be declared a “human right” across all EU states.

The Matic report, officially titled "The situation of sexual and reproductive health and rights in the EU from the perspective of women's health”, has called abortion bans “a form of gender-based violence”, and urges all member states to decriminalise abortion.

Claiming that abortion restrictions harm women, the Matic report also seeks to make abortion access easier for women by calling for the removal of “barriers” including “waiting periods” and a doctors right to conscientious objection, declaring that it should instead be “addressed as denial of medical care”.

Presented by Croatian MEP Pedrag Matic, the vote on the Matic report took place on Thursday 24th June, and passed with 378 votes in favour and 255 against. According to CNA, two alternative motions were presented to the Parliament prior to the vote, but both were rejected.

Although not legally binding, EU members states will now be put under pressure to adopt the measures within the Matic report, as the European Parliament have now declared that abortion bans are a violation to women's “human rights”. This includes countries, such as Malta who have a total ban on abortion, and Poland who recently banned abortion on disability grounds.

The report was favoured by the European Parliament, despite receiving opposition across the EU. Pro-life doctors in Malta had appealed to their MEPs urging them to reject the Matic report, expressing their concern over the threat it posses to conscientious objection. CitizensGo also launched a petition to urge MEPs to reject the report. The petition reached 120,000 signatures within the first day, prompting the debate and vote on the report to be pushed from the 7th June until later in the month.

Pro-life activists protest against Matic report ahead of vote. Photos credit Ana Cada Via of One of US

Archbishop Stanisław Gądecki from Poland also criticised the report, urging MEPs to vote against it. “Abortion is always a violation of the fundamental human right to life, a violation even more abhorrent because it concerns the life of the weakest and completely defenseless human being. It is, therefore, a manifestation of the most unjust discrimination,” he said.

Life Institute were informed by email that the Slovakian Parliament had adopted a resolution, with 74 votes out of 117, in response to the Matic report. Intiated by MP Anna Zaborska from Slovakia's Christian Union Party, the resolution calls out the report for “violating the principle of subsidiarity”. This is a principle that prevents the EU from interfering with issues when the Member States can deal with them effectively themselves, thus the resolution also reminded the European Parliament and the Member States “that issues concerning the healthcare policy and education fall within the competence of the national states.”

CNA reports that MEPs Margarita de la Pisa Carrión and Jadwiga Wiśniewska had argued that the report had “no legal or formal rigor.”

“It goes beyond its remit in addressing issues such as health, sexual education, and reproduction, as well as abortion and education, which are legislative powers belonging to the member states,” they wrote. “It treats abortion as a purported human right that does not exist in international law. This is a breach of the Universal Declaration of Human Rights and the main binding treaties, as well as of the case-law of the European Court of Human Rights and the Court of Justice of the European Union.”

Pro-life organisation One of Us published a press release in light of the vote, with comments from pro-life leaders in EU states.

“The result of the vote on the Matic report is very frustrating because it shows how much Europe, which has contributed to the development of the world, has fallen into a deep crisis, turning into the grave of the human rights. However, this result should not lead us to surrender, but to a greater mobilization of energies to make the true face of Europe shine again: the face of the dignity of every person from conception and the consequent fundamental right to life and right of freedom of conscience. ” says Marina Casini, the president of the Italian Movement for Life.

The President of the Spanish Family Forum, Ignacio Garcia Juliá, also commented on the case saying, “it is clear that the culture of death is spreading across Europe in the face of the indolence and indifference of those who should defend life. However, in the face of this attack on life and human dignity, we must respond with a strong purpose of mobilization and a promise to European society that all these anti-humanist laws and policies will be reversed sooner than they think”.