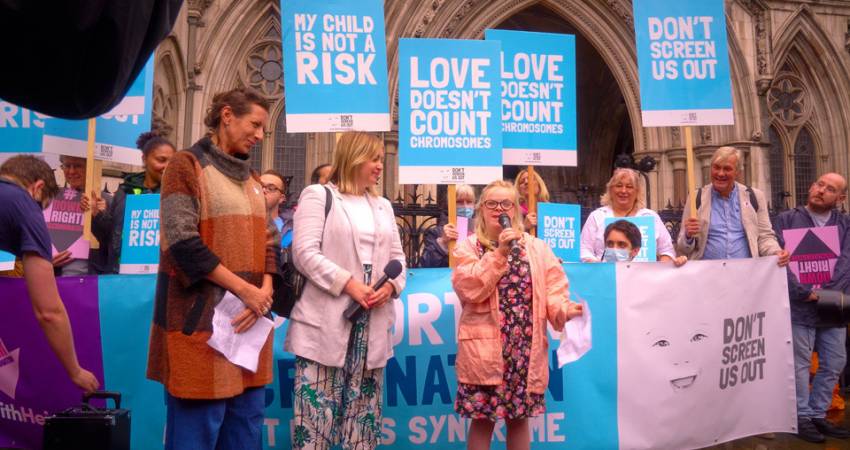 Heidi and Aidan take on the world to end Downs Discrimination

"This law makes me feel I am better off dead, I know I’m not, but that’s how it makes me feel," Heidi Crowter told a large group of people with Down’s syndrome and their families outside British High Court yesterday.

Ms Crowter (26) who has Down Syndrome, was speaking on the first day of the court case she is taking with Máire Lea-Wilson against the British Government over the law that allows abortion up to birth for Down’s syndrome which they say is discriminatory.

Ms Lea-Wilson is representing her two-year-old son Aidan, who also has Down’s syndrome, and says she was placed under pressure to have an abortion when a 34-week scan revealed her son had Down’s syndrome. She revealed that the last time she was offered an abortion was 2 days before Aidan was born. "I have two sons and I love and value them equally and I just can't understand why the law doesn't value them equally," she said outside the court.

In England, Wales and Scotland, there is a general 24-week time limit to have an abortion, but this is extended right up to birth where the baby has a disability. 90% of babies diagnosed with Down Syndrome are aborted in the UK.

Heidi and Marie addressed a large rally of supporters who had travelled from around the country including actress and comedian Sally Phillips, who starred in the Bridget Jones franchise.

Speaking outside the High Court, Ms Crowter said: "Here we are at the High Court to challenge the Downright discrimination that allows abortion up to birth for Down’s syndrome."

"There is no difference between me and someone who doesn’t have Down’s syndrome, like my nephew. Life is good for people like me and abortion law needs to show that. Everybody is equal, and doctors shouldn’t tell women that they will be sorry if their child is born. They should be supporting them."

"She thought I wouldn’t get married and I did. A year ago. It’s my anniversary this week. James, my husband, has Down’s syndrome too. He supports me in this case," she said to applause to supporters.

The judges need to know that we are not suffering and our parents and family don’t suffer. The doctors need to hear this, they need to hear from people like me and learn more about life with Down’s syndrome.

"My fight for justice and equality has brought us here today to change a law that makes me think I shouldn’t have been born. When the law changes for us then we will have won the fight. Let’s do this.”

Ms Lea-Wilson (33) said: "So my son came into my life two years ago and he is just the most incredible human being and everything that I’m doing now I am doing for him. It is a complete honour and a privilege to be stood being an ally beside Heidi and James and the rest of the Down’s syndrome community today."

"Our case is about equality and that everyone in the whole world deserves to be treated equally regardless of disability, gender, race, religion- and so I really hope that we win today and that we start to pave a path for true equality and acceptance of people with disabilities," she said.

Speaking outside the High Court, Lynn Murray, spokesperson for Don’t Screen Us Out and mother of Rachel who has Down’s syndrome, said that people with Down Syndrome were still marginalised and excluded from society and this needed to end.

"Since January 2016, the Don’t Screen Us Out campaign has been working for the right reforms to ensure that the Down’s syndrome Community is brought in from the margins, fully included in society. We’ve been raising awareness with the NHS and the Government of inequalities in pregnancy screening programs and asking for the voice of people with Down’s syndrome to be part of health policy development," she said.

"And in April 2016, Heidi Crowter joined us in London to protest outside the Houses of Parliament at the Don’t Screen Us Out demo. Heidi addressed the crowd that day making the point to the crowd and to the Health Minister that we are all equally valued – no exceptions. And she hasn’t stopped saying it since to anyone that will listen! And lots of people have been listening."

"Now Heidi’s an advocate of international stature and millions of people are hearing her voice and her message. And if the Health Minister wasn’t going to listen when she spoke nicely then she was going to take the fight for equality all the way. And she has!"

Sally Phillips, actress and comedian who attended the rally, and mother to Ollie who has Down’s syndrome previously told the Times: “Given advances in medical care and quality of life for people with Down’s syndrome, the different right to life is beginning to look not just dated but barbaric.”