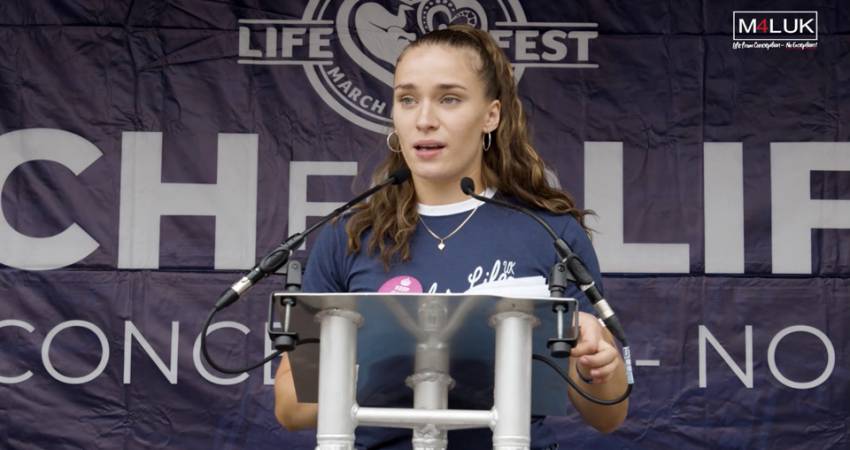 “I needed help, but my voice was silenced.”

This year's March for Life UK heard a moving, powerful and insightful testimonies from a young woman who had taken the abortion pill.

20-year old Natalia courageously and honestly shared a story of a telemedicine or ‘DIY’ abortion on stage in Parliament Square, London, where this year’s event was held.

A beautiful young woman with an incredible sense of sincerity about her, she is just one of the many thousands of women behind the 209,917 that  took place last year in Britain.

But Natalia is far from being just a statistic or a number. Like every woman or girl who went down that road, she is an individual who has been impacted by the decision and lives with it daily.

Of course, It’s hard to wrap your head around - probably impossible to comprehend - the real weight of those statistics, and the domino effect each and every one of those 209,917 abortions has had on such an immense number of babies, mothers and fathers.

Although an upsetting speech for many to hear, Natalia’s palpable grace, humility and sincerity was a powerful witness. She opened her address with such honesty, telling the crowd:  “I’m just so taken back by you being here. I wish I wasn’t here, but I am.”

Like many women in last year’s statistics, Natalia had a ‘telemedine’ abortion when it became legal to take both sets of abortion pills at home in the UK. The decision to allow women to take the pills without a face to face consultation stemmed from the UK’s Covid-19 lockdown.

Then only a teenager, heartbroken and frantic after discovering she was pregnant, Natalia told those gathered how she became consumed with fear when the pregnancy test came back positive.

“Last year in March, I found myself pregnant at nineteen. It’s weird because I can remember everything but at the same time nothing of that time, as I believe my brain tried to block it out.”

Although she was In the midst of terror and indecision, other emotions started to develop within her too: “If I’m honest, I found myself feeling this instinct to love and protect my baby.”

A visibly emotional Natalia explained that as the weeks rolled on, she failed to make a clear decision about what to do, but admitted that fear played a huge factor in her decision: “One thing I do know was the fear that took over when I found out.”

Unfortunately, Natalia said was offered very little support from those who did know about her pregnancy. “[My friends] told me I shouldn’t, couldn’t and wouldn’t cope,” she recalled between sobs. “And I began to believe them.”

Natalia told the crowd that she went to the abortion centre twice but left both times as she failed to decide, remaining deeply conflicted about what she should do for weeks.

Fighting back tears, she said that on the third and final visit to the abortion centre, she finally agreed to take some abortion pills home with her. Recalling the lack of in-depth support from the abortion provider, she said: “The repeated visits and tears should have been a warning sign to them that this was not what I wanted”.

But even with the abortion pills at home, Natalia found herself reluctant to take them for a considerable length of time: “I was 8 weeks pregnant when I got the pills but I waited for another 2 weeks (before taking them) – looking back all I was looking for was for help,” she said through tears.

No life-affirming help came, and Natalia said she ultimately felt coerced by close friends who knew about the pregnancy, as well as by an emotionally abusive boyfriend (“...by a father who never showed up,” she recalled) into taking the pills to end the life of her unborn son, who she later named Isiah.

“Looking back on my home abortion, there were so many things that are wrong and so many lies I was told,” she said.

She went on to recount how in the early hours of the morning last June, she went into her bathroom and began to abort her child, which immediately resulted in “emotional and physical pain”.

“I needed help, but my voice was silenced.”

She also tearfully described reminders she faced in the aftermath of the abortion: “My bed became my baby’s grave – I still lie on that same mattress stained with blood.”

Bringing her emotional story to an end - with the help of a supportive crowd who clapped and cheered her on as she would lose and then regain composure - she also listed some of the dangers and risks associated with home abortions.

Looking up and smiling at the crowd - for the first time - she closed her speech with the words, “Can we agree that women deserve better than this?”

Applause resounded as the audience clapped and acclaimed shouts of “Yes!”

The young woman’s impactful testimony at the March for Life comes as the UK abortion industry has found itself coming under fire for various reasons.

Earlier this month, Gript reported on a worrying surge in the number of 999 calls from women taking abortion pills at home.

In a separate controversy in May 2020, it was reported that police in England were investigating the death of an unborn baby after a woman took ‘pills by post’ abortion drugs (only permitted for use up to 10-weeks gestation) while 28 weeks pregnant - four weeks past the legal limit.

Indeed, Natalia highlighted the recklessness she perceived within such a system.

“There are women like me that are receiving these pills with no face to face mental health assessment.

“How is this safe? [There is] no proper way of detecting pressure and coercion from partners, friends or family; no scan to find out the gestation of the baby; the ability of women to hang onto these pills until further along in their pregnancy.”

Meanwhile in Ireland, there has been a spike in the number of women seeking post-abortion counselling since the introduction of abortion on demand.

Indicative of the level of emotional and mental struggle post-abortion, a Cork Sexual Health Centre recorded a 50% increase in the number of counselling sessions it performed. In 2019 alone, 236 counselling sessions took place for women who had abortions according to an annual report - double the 2018 figure.

Natalia’s story is proof that regardless of where people stand on the abortion issue, abortion can, and often does, inflict huge wounds on women — whether these wounds are openly faced or not. As Natalia bravely summarised, “My son died that day and so did a part of me.”

This admirable young woman, who so clearly needed and deserved true support was - in her own words - left “isolated” and struggling from “trauma,” explaining that she “didn’t want to go into [her] room (where the abortion happened) and “sometimes wouldn’t come home for weeks.”

If this testimony is not an indication of how we are failing women, then I’m not quite sure what is.

Even though some may prefer to describe the procedure using all sorts of fantastic-sounding euphemisms - “choice”, “freedom,” and “rights” — to name but a few — this testimony is proof that liberation cannot be won through the destruction of babies through abortion pills.

“Natalia, you did so well! Thank you for sharing your story. As we stood and listened I watched as one of the police officers was clearly taken by your story. Your story will I’m sure save many from experiencing what you had to go through,” one person commented under the video on social media.

At the end of her speech, Natalia referred to the group Rachel’s Vineyard, a post-abortion healing minstry for women and men impacted by abortion.

She said the constant support she received from the organisation made her realise that she was proof that despite what she went through and the enormous pain she suffered, “there can be beauty amongst the ashes”; that help is constantly available, and healing is always possible.

The March for Life UK is the UK’s largest pro-life event which has a continuous year-long mission and one annual large-scale public event.

The annual summer event is a “pro-life festival that consists of live music, family-fun activities, educational stalls, Christian prayer and inspiring speakers” according to the organisation’s website.

March for Life states that: “The highlight of the day is a joyous march through London proclaiming our central message of “Life from Conception, No Exception.”

Throughout the year, the March for Life’s educational talks and media content “aim to raise awareness of the hurt and damage that abortion causes and to direct people towards the different pro-life organisations around the UK”.

In doing so, the organisation seeks to encourage people to be more actively involved in creating a culture of life.

The event returned as abortion numbers across the UK continue to climb, with a staggering one in four pregnancies in England and Wales now ending in abortion, according to the latest statistics.

It is the highest number of abortions ever recorded in one year in England and Wales.

The increase is broadly being put down to women being able to seek abortion pills which can be taken at home and the longing for financial security.