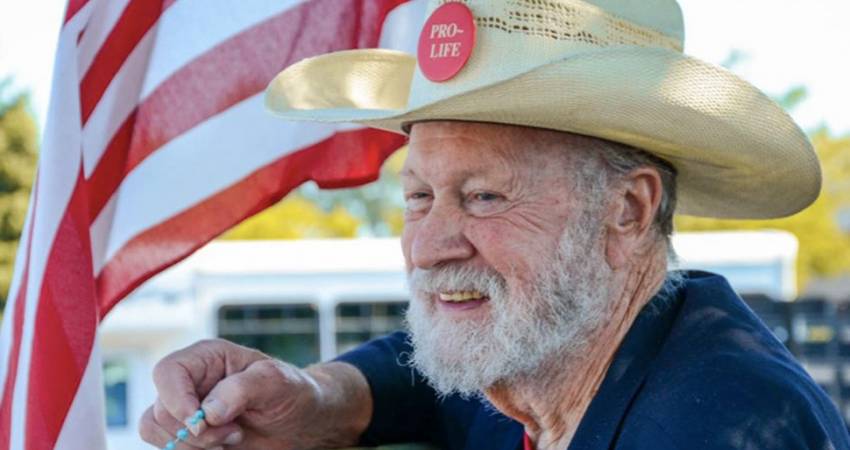 Joe Scheidler, who saved thousands of babies, has gone to his heavenly reward

We were deeply saddened to learn of the passing of one of the true heroes of the pro-life movement, a gentle giant of a man whose courage and commitment to protecting life inspired millions and saved the lives of thousands of babies.

As Shakespeare would have said, he bestrode this narrow world like a Colossus: an infinitely kind, principled and courageous  leader with a mission to end abortion.

The church in Illinois was full for his funeral, and many more lined the streets outside to show their respect for a man who had transformed and led the pro-life movement in his own inimitable way, always with great heart and courage and vision, and also with great compassion and great love.

It was fitting then that during the broadcast of Joe's funeral the noise and laughter of babies and small children in the church was constantly heard. He would have loved that, I suspect.

"He could not understand how anyone could kill an innocent child in the womb," the priest said, "and in everyone of those children he saw you." Everyone who knew Joe Scheidler knew how true that was. He cherished human beings, and they cherished him, for his indefatigable good humour, his warmth and for his unfailing example. In exposing the injustice of abortion, Joe Scheidler showed us how to be better human beings.

It can't have always been easy. Joe Scheidler was set for a big career in public relations, married to the love of his life Annie, but he instead took on the enormous and difficult task of stopping abortion and of bringing love and compassion to both mother and child.

It became their life's work. Joe with his fedora hat and his bullhorn, Annie by his side, dedicated his life to the pro-life cause, founding the Pro-Life Action League in Chicago in 1980, and penning the book which became a guide for activists everywhere: "99 ways to Stop Abortion".

He was successful in his activism and much admired, and while it's difficult to estimate with certainty, it's likely that the babies saved by the League number in the tens of thousands. Joe brought so many activists to the cause, including the founder of 40 days for Life, and many others, not just because of his smiling, sincere encouragement but because he made us understand that everyone has a part to play in saving babies and stopping abortion.

That success made him a target of abortion campaigners who sought to stymie his work by tying him up in malicious and time-consuming court cases, including the ridiculous charge of racketeering laid against his work at abortion clinics where he sought to offer women a better answer.

With the assistance of the Thomas More Society, Joe fought those charges all the way to the U.S. Supreme Court Centre not once but three times. He won, but it must have been exhausting. But Joe took it all in his stride. As we say in Irish, 'Ní bheith a leithead arís ann' - we will not see his likes again.

His was a life committed to fighting for those suffering injustice. In 1965, while teaching at Mundelein College, he brought a group of students to march with Martin Luther King from Selma to Montgomery, Alabama.

"It's fitting that my father died on the day when Americans remember the legacy of Martin Luther King," his son Eric Scheidler, an equally superb leader of pro-life activism. "Seeing the impact that regular Americans could have by taking action against racial injustice inspired my father to mobilize Americans in the same way in the fight against the injustice of abortion."

Joe never backed away from exposing the ugly reality of abortion, for all that the tiny broken bodies also broke his heart. He wanted to give the least of God's little ones the love and dignity and protection they deserved. His example encouraged so many of us to do the same.

He died aged 93, surrounded by his loving family, and admired by people everywhere. Henry Hyde once said that in our moment of final judgement "those in the pro-life movement will not be alone. I think there'll be a chorus of voices that have never been heard in this world but are heard beautifully and clearly in the next world. hey will say to God, “Spare him, because he loved us!”’