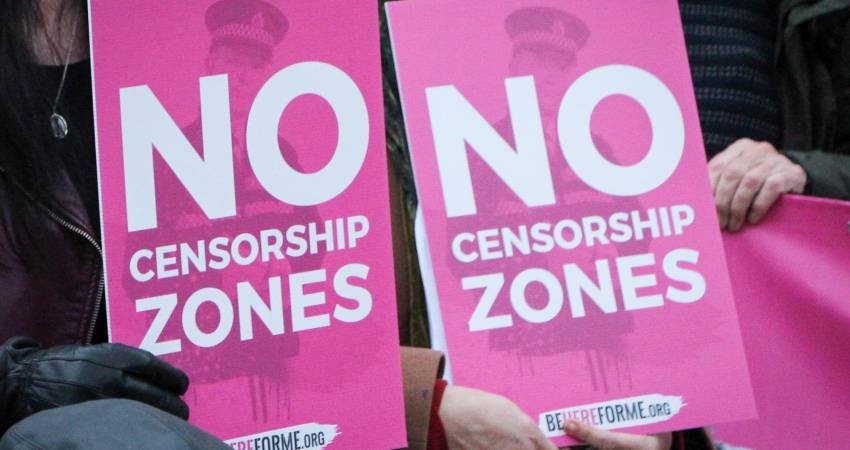 A majority of Stormont parties have voted to criminalise pro-life prayer and outreach outside abortion centres in Northern Ireland. The ‘Abortion Services (Safe Access Zones)’ was brought by former abortion ‘escort’ worker Claire Bailey MLA, and passed its second stage in the NI Assembly yesterday, 12 October.

If passed, the bill would be the first piece of legislation ever enacted in the UK to make reaching out to women outside abortion centres a criminal offence. Abortion on demand has been legal in England, Scotland and Wales since 1967 under the UK’s Abortion Act.

Sinn Féin and the SDLP supported the proposal along with the Greens and the Alliance Party, but the DUP and TUV said they were strongly opposed to the measure,

DUP MLA Jonathan Buckley described the bill as "regressive" and said he was concerned that "anything from a conversation to a leaflet" would be deemed criminal under the legislation.

The explanatory notes of the Bill state that its purpose it to “...make it a crime to do anything outside an abortion centre...which might influence a person in their decision to attend.”

In the UK, there have been various attempts to introduce similar legislation but to no avail whilst in Ireland, abortion activists have also called for protests and vigils to be banned. Pro-life TDs such as Independent Carol Nolan have argued that ‘Exclusion Zones’ would set a dangerous precedent for curbing freedom of speech.

The Be Here For Me campaign, by Mothers who have been helped by Pro-Life vigils outside abortion centres, advocates for the help to remain in place, whether that be in the form of prayer or outreach.

Alina Dulgheriu is one such mother from the London based group. Ms Dulgheriu has been vocal on how she was offered help outside an abortion centre which allowed her to choose life for her baby.

She previously told members of the Oireachtas that “a just and caring society doesn’t criminalise people for offering help to vulnerable mothers” as she addressed a meeting on the Irish government’s plan to introduce the ‘exclusion zones’ like those proposed in the north.

Ms Dulgheriu said she owes the life of her daughter to a pro-life person she met outside a Marie Stopes abortion clinic in Ealing, London. From her personal experience, she is opposed to ‘exclusion zones’ outside abortion clinics.

She told Oireachtas members: “The day I made my way to the abortion facility was the darkest day my heart has ever known. I knew that there was no help, no support during my pregnancy. All I needed was help until I gave birth. A lady and a leaflet. That’s all it took. Right there at the steps of abortion centre. This lady was offering unconditional help during my pregnancy and wanted nothing in return just for me to make the right decision in a desperate situation.”

The Green Party Leader’s bill was supported by a range of abortion-supporting parties the SDLP, Sinn Fein, the UUP, Alliance and PeopleBeforeProfit while the DUP and the TUV voted against the bill. Opponents insisted the bill is too ambiguous and open-ended, and raised serious concerns about the possibility of individuals handing out leaflets, holding banners or simply praying being criminalised. The DUP and TUV also pointed out that current legislation is already in place to deal with any incidents like those alleged by Clare Bailey.

The assembly voted on Tuesday, by 58 votes to 29, meaning the bill passed its first legislative hurdle. There do, however, remain several legislative steps before the bill would make it into law.

The following MLAs voted in favour of the criminalisation of pro-life activists outside abortion centres:

The Bill states the purpose of the zones is to ensure that pro-life people '...are criminalised’ for any actions within a zone which may have the effect of “influencing” persons accessing the abortion centre. It follows that activity such as prayer, holding a sign, or having a conversation with a woman to offer help or resources will be “punishable on conviction by fines” up to £2500 under the law.

The Bill also gives police the power to “...use reasonable force” to physically “remove" a pro-life person from the zones.

“Freedom of Assembly and Freedom of expression are fundamental human rights”

Precious Life, a pro-life organisation in Northern Ireland who reach out to women at abortion centres to offer resources, blasted the move as “draconian, oppressive and discriminatory”.

“Clare Bailey’s abortion zones are discriminatory as they would only target pro-life groups. Freedom of assembly and freedom of expression are fundamental human rights – both protected under Articles 10 and 11 of the Human Rights Act,” the organisation said.

“Clare Bailey - and other pro-abortionists in SDLP, Sinn Fein, UUP, Alliance, and PeopleBeforeProfit - are hypocrites. They demand ‘safe access' to abortion centres, but completely ignore the reality that babies are being killed inside these centres. The ultimate safe zone for unborn babies should be in their mothers' wombs.”

The organisation slammed the attempt to criminalise pro-lifers and said the Right to Assembly and the Right to Free Speech was under attack. Precious Life said they would challenge it through the judicial system if passed.

“Clare Bailey and other pro-abortionists who campaigned to legalise abortion in Northern Ireland, continually said women should not be criminalised. Now her Bill actually states in black and white that pro-life women outside abortion centres must be 'criminalised.'

They said that the proposal sought to cancel the Right to Assembly and the Right to Free Speech. "But Precious Life reiterates that the right to freedom of assembly and right to freedom of expression are fundamental human rights. If this Bill is passed, Precious Life will challenge it through our local courts, the High Court, the Supreme Court, and if need be, right up to the European Court of Human Rights.”

The group also disputed Ms Bailey’s claims of ‘harassment’ from pro-lifers outside the abortion facilities.

“Claims of ‘harassment’ and 'intimidation' are cynical lies by pro-abortionists with a clear agenda to stop any pro-life public presence. These 'Abortion Zones' are nothing but a desperate attempt to rob vulnerable women of an alternative to abortion. Pro-life vigils are peaceful, and the police already have .

“Precious Life’s peaceful vigils in Northern Ireland will continue offering help and life-affirming alternatives to women outside the abortion centres. We will never stop actively protecting unborn babies — when and wherever their lives are in danger of abortion,” the organisation said.