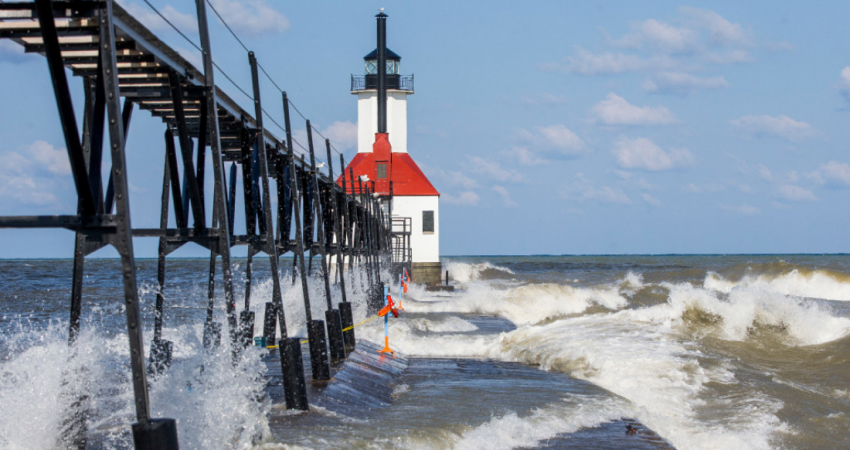 A five-month pregnant woman has been hailed a hero after she saved three children from drowning.

According to Live Action, Alyssa DeWitt had taken her children to the Lake Michigan beach, and reportedly said in a Facebook post that she had not wanted to go to the beach that day due to the windy weather, but felt that she had to be there.

“Something told me to go, so we did,” she wrote. “Today, I took the kids to the pier side of the beach. We NEVER go to this side. Ever. Today, I felt that this side was best, for whatever reason. You can’t tell me it was ‘luck’ I was there when I was. I was meant to be there… and I’m so sooo thankful for it.” she said.

Whilst at the beach, she noticed the three children, all under 15, in the sea, frantically waving their hands. Two of the children had been overpowered by the sea when swimming, where the third had gone to help them, only to get also caught in a rip current that was slamming them into the pier, and pulling them out to sea.

Ensuring her own children were out of the water, DeWitt raced to the pier and called 911. However, feeling unable to wait for 911 to respond, she attempted and succeeded in saving all three children herself.

“I put my phone down with 911 on and laid down over the side of the pier and told them what to do, reach for my hand,” DeWitt told UpNorthLive. “Every time I would get them part way up a wave would smash them back down,” she said. “This part will stick with me forever. This girl looked at me and said, ‘I’m going to die.’ It makes me cry every time I think about it. I said ‘I promise you. I am not going to let you die out here. I will get you out of this water.’”

“The adrenaline kicked into high gear and somehow I did it,” she wrote in her Facebook post. “I pulled them up the pier wall, with the waves slamming into me and throwing the kids all over the place, pulling with all my might on wet slippery hands, and almost going over the edge myself a few times. I kept my promise, I was going to do whatever I had to do.”

A hospital check up afterwards confirmed that DeWitt and all three children escaped with minor injuries, and DeWitt's baby was fine.

“I’m beyond thankful I was where I was and that those kids get to live another day,” she added. “I’m loving my babies a little harder tonight. I’m sure those parents are too. God is good.”

Josh Glass, chief of the Manistee City Police, spoke of her bravery after the Manistee Police arrived at the scene. “We all think we’ll do this, but it’s very difficult when you’re faced (with that) situation. By all accounts this person did not hesitate to put her safety aside and we are extremely thankful for that,” he said in an interview with the Manistee News Advocate. “She’s a hero.”