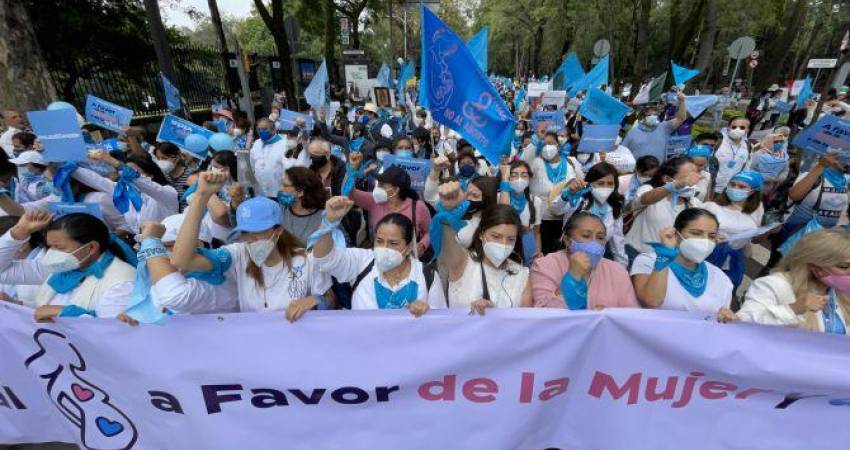 Thousands attend march for life in Mexico City, with over a million taking part nationwide

Thousands of people gathered in Mexico City as part of a nationwide March for women and life across Mexico last month, with an overall over 1 million taking part across the country.

According to CNA, shortly after the Supreme Court Justice of the Nation made the decision to legalise abortion and to restrict the right to conscientious objection of health professionals in September, over 300,000 gathered in Mexico City on 3rd October, and marched from the National Auditorium to the Independence Monument to protest this cruel new abortion law in Mexico.

Attendees expressed their criticism of the recent decision to legalise abortion thought posters and slogans, and often chanted in defence of life from conception and in favour of women.

On a stage at the Monument, people were able to listen to the beautiful sound of the heartbeat of a 38 week old baby in womb when a doctor performed an ultrasound on the baby's mother.

Testimonies were also given at the Monument, including Marcial Padilla, the coordinator of the march, with his wife Mayela Sepúlveda about their 9 year old daughter Ana Paula, who has a “very severe brain injury

"She can't take care of herself, she needs everything from us," they said.

"She is just as vulnerable as when she was a baby before birth or newborn," they recalled, highlighting that "we have learned that love for a sick child can be infinite."

While "some might think that Ana Paula is worthless, or that her life has no meaning," they pointed out, "it is exactly the opposite."

"That does not mean that it is easy or that it does not cost us work," but they stressed that Ana Paula's life "is wonderful by itself."

People also heard from former worker of Planned Parenthood in Arizona, Mayra Rodríguez, who is now a pro-life leader.

"I was the director of the largest abortion clinic in the state of Arizona.” she said. “What I saw there is what has me standing here with you today.”

She explained about the occurrence of “incomplete abortions” where a doctor had "left the head of a 14-week-old baby, which he referred to as garbage, inside the mother's womb, without caring if that woman would die the next day from an infection.”

Another powerful testimony was from Catholic speaker and pro-life leader Lianna Rebolledo, who at the age of 12 was kidnapped and raped, where she became pregnant.

She explained that many think that rape has “already destroyed a girl's life, that no one is going to love her, that she is no longer worthy, and that she should abort the baby. But you know what, that's a double victimization."

Although the doctors advised her to abort, she said that becoming pregnant “changed my life.”

"Even as a 12-year-old girl, you ask yourself: Will getting an abortion take away the fact that I was raped? Will I forget the trauma? No, right?” she said. "The greatest gift that life has given me, that God has given me, has been my daughter. She, at four years old, told me, ‘mommy, thank you for giving me life’."