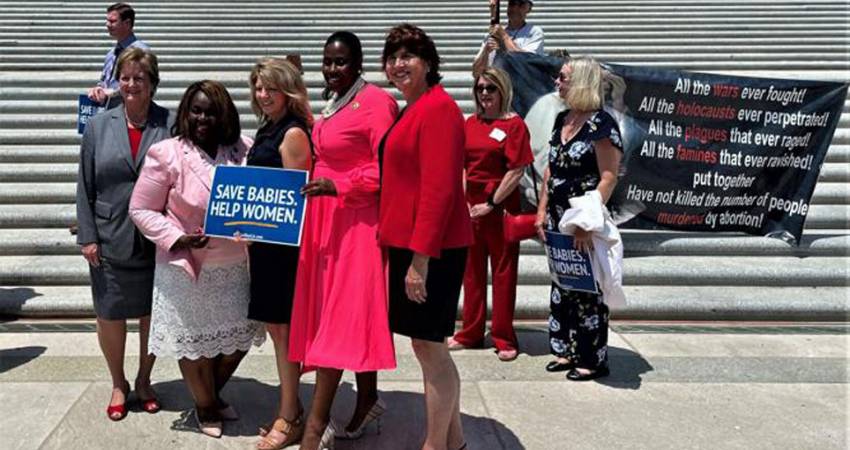 Pro-Life America is turning heads across the globe with news breaking barriers such as the leak showing the Supreme Court is set to overturn Roe v. Wade - and of course following shortly after the newly announced Oklahoma Bill which states that it will protect human life all the way up to the moment of conception.

These are wins for the Pro-life movement, not just in the US but also world-wide, and for us here in Ireland too, giving us an exemplary witness proving that the pro-life movement is growing and not dead in the water as the liberal media would like to have us believe.

Live Action, a great non-profit organisation has been on the ball keeping us up-dated with the continuous pro-life momentums which are thriving throughout the United States, reported on one particular milestone -  that “every current female senator in Louisiana is pro-life”

The five female Senators of Louisiana are all proudly pro-life - so much so that all five of them were visibly present at a Pro-life Rally in the State Capitol.

‘Jackson was the author of an amendment to the Louisiana Constitution declaring that there is no right to an abortion or state funding of abortion. It was approved by voters in 2020," writes Live Action.

It is probably worth a mention that the five female senators consist of three Republicans and two Democrats. Why is this worth a mention? Because the pro-life stance they proudly take crosses part lines.

It's worth saying that in a world where the mainstream media is so bizarrely obsessed about ridding itself of a “patriarchal society” which let’s face it at this point is pretty much a non-existent and outdated point-of-view, these amazing women take no part in this nonsensical backwards mentality.

“We do think of it as a bipartisan issue on which we can all agree in our caucus,” Sen. Hewitt said. “It’s exciting that both sides of the aisle understand the importance of saving babies and protecting mothers.”

The five senators have not shyed away from their stance and have even actively sought to improve the state of Louisiana with further pro-life options.

“One of the most important things we need to do now is to have a safe place for all of these women to land,” said Sen. Cloud admits that the current government will have to do more to be able to support women and babies, “The cause will go on but it will take a different shape. That’s going to take a financial commitment.”

Furthermore, Sen. Hewitt introduced the Senate Bill 388, a Bill that would restrict the distribution of the abortion pill without a prescription.

This would affect any company that would sell the two abortion pill drugs — mifepristone and misoprostol, without a prescription. The consequences of the Bill might be seeing these companies face criminal penalties; the woman however would be left exempt. The Bill has been successfully approved by the Senate and it is expected to pass the House as well.

Sen. Barrow herself shared that she “almost had an abortion when she was younger and went to an abortion facility before changing her mind.”

“I’ve walked that walk,” she said. “Early on I experienced some ridicule from within my party but I’ve held fast to my belief. I think of my wonderful daughter now — she’s 37 — and I can’t imagine having gone through with that abortion.”

These five powerful women together stand brightly representing a beacon of light not only just for the Pro-life movement and for unborn babies but also for all women everywhere.

Well, it certainly is somewhat of an eye-opener, five pro-life women sticking strongly to the moral high ground, unlike some, such as Jack Chambers here in Ireland who has recently made the decision to change his mind on abortion in a cheap bid to gain some imaginary "pro-choice" vote.

Let us hope that this might inspire future generations of strong pro-life women to work together in Ireland.