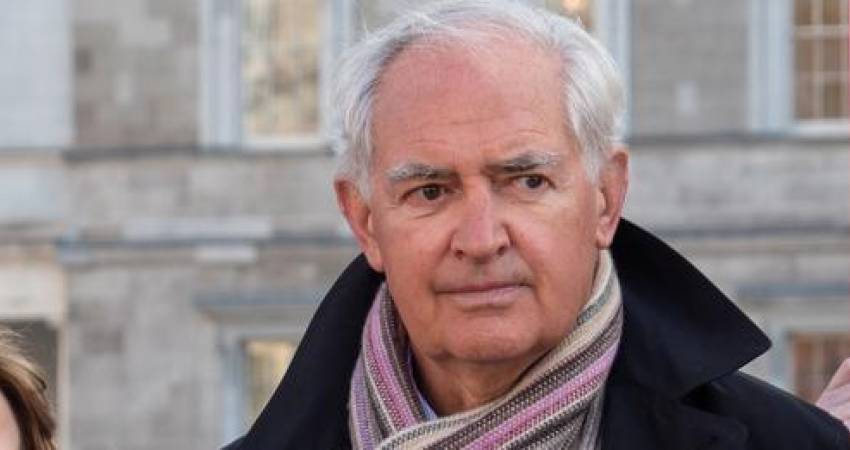 The ‘controversy’ of the National Maternity Hospital is causing people to lose their minds. The most visible manifestation is the minor demonstration in front of the Dail of a few hundred disgruntled activists wearing silly clothes and carrying silly signs. The prominence given to the small gathering by all major news outlets indicates that they all seem to have lost their compass on discerning what is reality and what is just nonsense. But most of all, we should be concerned about Dr Peter Boylan.

His most recent entry into the discussion was to post on Twitter a series of pictures from inside St Vincent’s Hospital indicating to him the malign, nefarious influence of the Sisters and religion inside the hospital despite claims from various sectors that the hospital will be ‘entirely secular’ in the future.

First – the transfer of the hospital is entirely in the future. Posting pictures of the current state of play is not representative of the future. But that is a minor point. It helps foment the hysterical ‘nun scare’ currently undergoing a McCarthyite ‘investigation’ in Leinster House and in the public scare.

Among the very worrying symbols of evil ritual that Dr Boylan uncovered at the hospital were:

It is shocking stuff. Equivalent to a Catholic walking into a Ouija board séance in the operating theatre maybe. Triggering no doubt.

Oddly, Dr Boylan doesn’t quite explain what the issue is. If he believes, as a Catholic does, in the Mass and the Cross, he ought to have no truck with their presence, as they are, in the eyes of the believer, nothing but good. If he doesn’t, then they are benign symbols of the beliefs of misguided others, but totally harmless because they have no supernatural powers. However, it seems to be a case that Dr Boylan is of the view that they have some sort of power, not a good power, and therefore, evil. Is Dr Boylan seeing ghosts?

To buttress his position, commenters say that these symbols make them feel ‘unsafe’ walking into a hospital. This seems to be sufficient reason for objections to their presence. The symbols seem to have more power, somehow, than the intricate legal documents that underpin the transfer of the hospital to its new trustees. It seems we continue to live in a superstitious society.

Other dissenters claim that the space should be filled with a non-denominational space for contemplation and mindfulness. A fair request? Why is it a case of either/or? Unfortunately, despite the ill-informed beliefs of secularists and atheists, mindfulness and contemplation provide no solace for believers in a time of crisis. If anything, such empty spaces offer nothing but emptiness to the believer, Catholic or otherwise. At a time of crisis, faced with serious medical and health concerns, possible imminent death of self or of a loved-one, the vast emptiness of contemplation and mindfulness offers nothing but emptiness – compounding an already bleak situation: from the perspective of a believer.

To double-down on this, the removal/replacement of a religious space, consecrated, with a neutral, secular, non-denominational space, is not offering some form of equality: it is the deliberate decommissioning of a place of faith, a slap in the face of believers actively telling them that their belief system is no longer welcome in the public square, that it has been replaced by a new public space, and each encounter with that absence is a reminder of the divisive secular agenda.

Dr Boylan also highlights the scandal that a portrait of Mother Mary Aikenhead remains in the hospital and that the hospital will “continue the mission of the now Venerable Mary Aikenhead’. In fairness, Dr Boylan does not declare if this is a good or a bad thing, so it is worth asking what her mission was? It was a life devoted to serving the poor and suffering in the early 1800s when Ireland was a basket case for healthcare and other social services, including the founding of St Vincent’s Hospital. So, perhaps Dr Boylan is highlighting how the new hospital trustees will continue her great work?

Such a mission would indeed be laudable and Dr Boylan should be praised for highlighting this. Certainly, in this day and age, denigrating someone based on one of the protected characteristics would not be carried out by a man of such public prominence? Yet, we seem to be trapped in a cycle of denigration of people’s religion in the quest for an ‘entirely secular’ hospital.

But it isn’t really the case that Dr Boylan wants to see the mission of Mother Mary continued. In fact, on May 9th he tweeted his concern that, possibly, sometime in the next 300 years, Ireland might have a conservative/ Catholic health minister who might conspire with the 3 St Vincent Hospital directors who are committed to upholding her mission. Imagine, some time in the next 300 years…

For Dr Boylan, it has to be understood that he is a man who is evolving. In 2002 he stated the then legal position in Ireland ‘would certainly not interfere with an obstetrician’s duty to do everything possible to preserve the lives of pregnant women’. After the death of Savita Halappanavar in 2012 he was adamant that the law was the reason she died. He was either wrong in 2002 or wrong in 2012.

Since then, he has been the government’s tsar on promoting abortion. With the repeal of the 8th amendment to the constitution, having retired as Master of the National Maternity Hospital, Dr Boylan had been without a purpose –  until the ghost of Mary Aikenhead began to haunt him in his retiring hours, prompting him to reinvent himself as a legal expert, parsing and analysing with the gimlet eye of a canon lawyer.

Retirement, obsolescence can do funny things to the mind. It is time for us, as a caring people, to ask Dr Boylan if he is ok. And ask the Sisters of Charity to opt out of this charade and leave Dr Boylan and the State to found their own hospital.