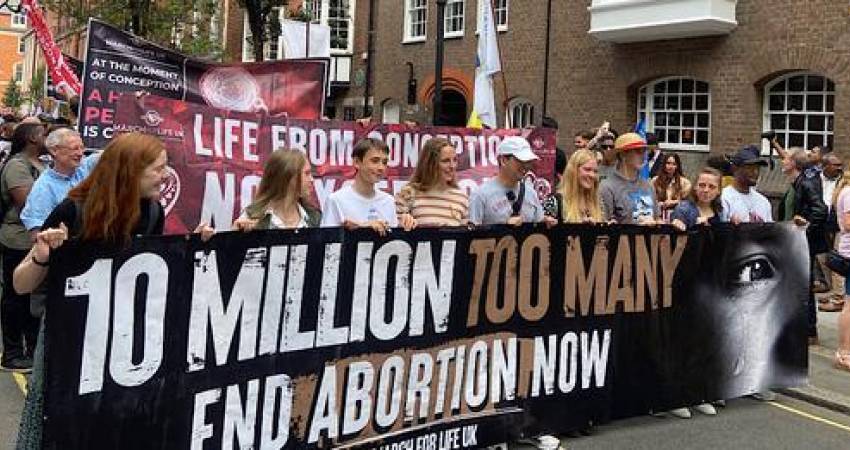 March for Life in UK gets record numbers

The March for Life UK took place in central London at the weekend, attended by an estimated 7,000 people. It’s the largest number to ever attend the annual pro-life March to Parliament Square since the event began in Birmingham ten years ago.

The March kicked off with an indoor pro-life festival where pro-life organisations from England and beyond showcased their work along with sessions for children of all ages, testimonies, talks, prayer, music and more. Thousands then processed through the streets of the capital, proclaiming their central message, ‘Life from Conception — No Exception!’, ending up in Parliament Square where a stage was set up for keynote speeches, finishing with a time of prayer and remembrance. 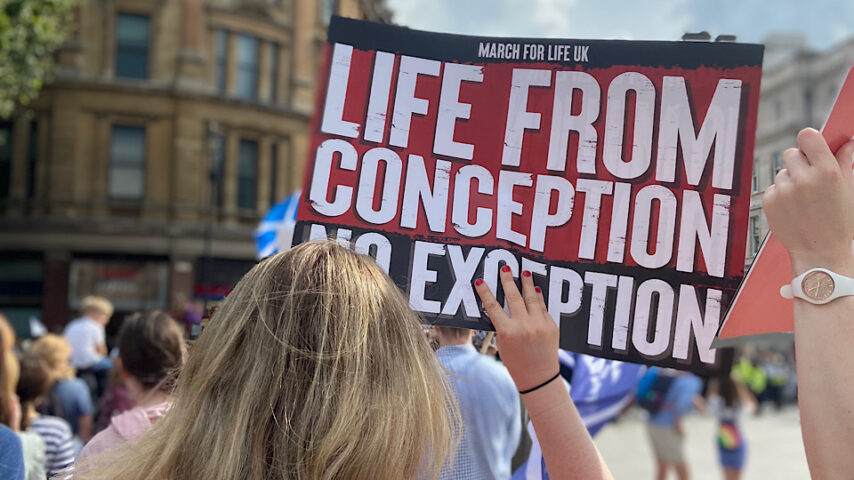 In a culture where abortion is so entrenched, I was genuinely surprised by the numbers who descended upon London decked out in pro-life t-shirts, clutching signs declaring “abortion is the number one issue” and “end abortion now”. I expected to see something significantly smaller in the capital which is the beating heart of a country where 10 million tiny lives have been ended by abortion since 1967. After all, a public declaration that you’re pro-life in a nation where legal abortion has been seen as a fundamental tenant of society for more than five decades is perhaps as counter-cultural as it gets. 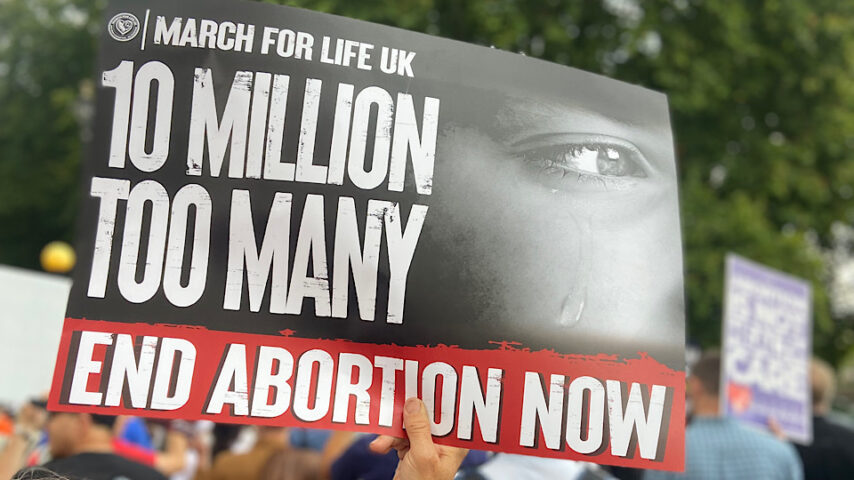 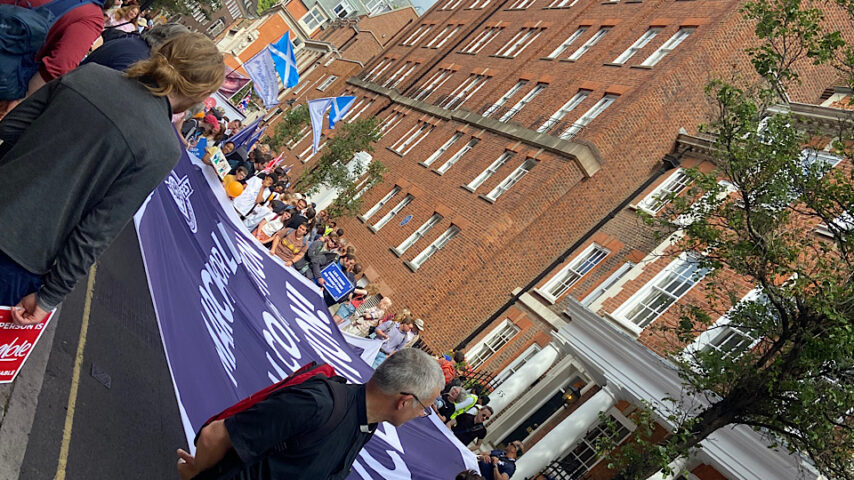 10 million was a statistic repeated with frequency during the day, as organisers encouraged those present to get out their phones and tweet the hashtag ‘10 million too many’ so that the March could hope to impact a social media realm which has become increasingly daunting and hostile to those who express pro-life views publicly. 10 million; it’s a figure which represents a loss which is incalculable, an impact immeasurable 55 years on from the passing of the UK Abortion Act.

In truth, even though there was joy and unity and solidarity throughout the vibrant procession, there was also a palpable sense of loss as the March made its way through the sprawling UK capital. While many bright placards presented positive messages, declaring ‘Love them Both’, and children with colourful facepaint held balloons, there was still a sombre undertone to a March which not only celebrates life, but also inevitably mourns the loss of so many lives wiped out by the UK’s Abortion Act. 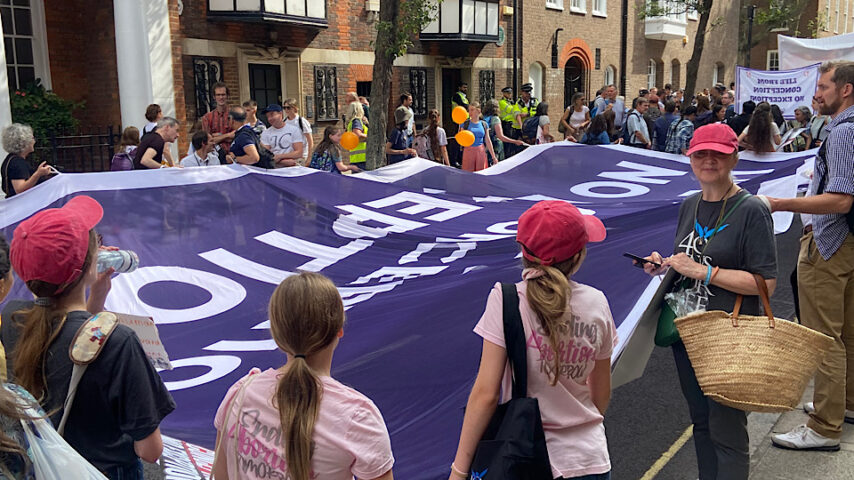 Yet the reality of Britain’s abortion culture necessitates a March such as this one. Last year saw the highest number of abortions ever recorded for women resident in England and Wales. 214,256 abortions took place in 2021 alone, according to the alarming Department of Health statistics released at the end of August. It’s an indication of just how ingrained abortion has become, and a sure guarantee that many women, as well as men, are hurting and damaged by the impact of a loss of a child through abortion. 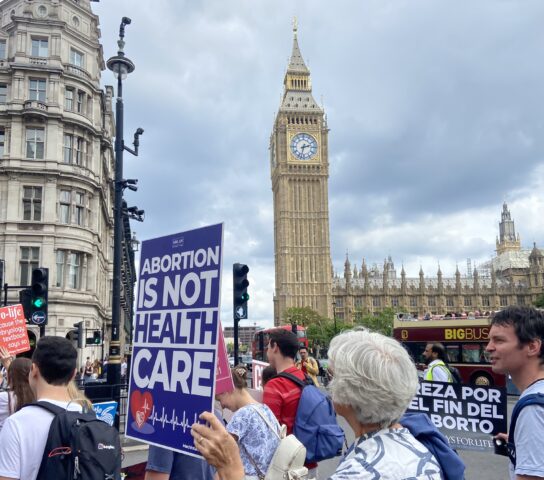 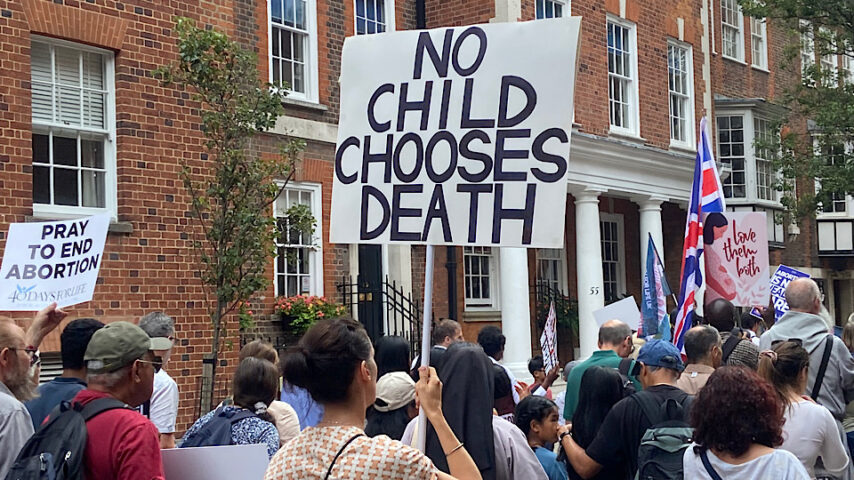 The procession ended in a gathering at Parliament Square. Front and centre of this part of the event were the experiences of women. A brave lady named Hayley was the first to address the thousands gathered. She shared her heart-rending, painful experience of abortion and coercion. 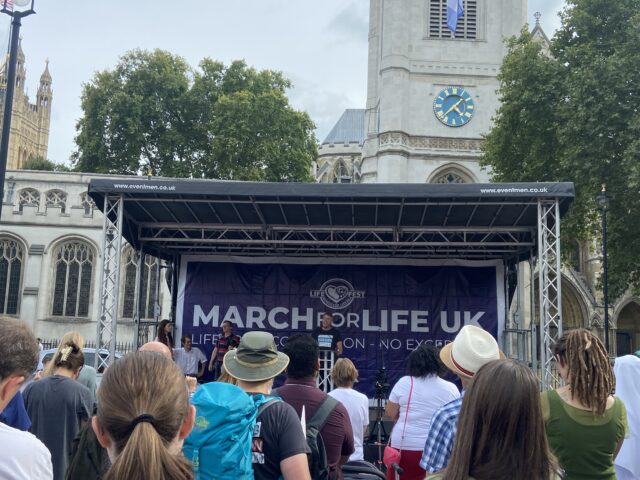 “My daughter was one of those ten million. It’s almost like you’re marching for her, thank you”, she told thousands of strangers through watery eyes.

She shared how she was coerced into ending her daughter’s life through abortion when she was just 16 years old. The vividness with which she recalls the experience all these years on is deeply telling.

“She might even have had children of her own by now. She could have been having my grandchildren. It’s so impactful. It’s not just cells, this is a life and generations snuffed out”.

Hayley told the March how she knew she wanted her baby when she discovered she was pregnant as a scared teenager. However, her family were not pleased. And when she spoke to her older boyfriend, he demanded she had an abortion.

“The pressure was immense. I was lied to, I was bullied, I was manipulated into agreement.

“I begged and I pleaded with this man to let me keep my baby. Even if it meant looking at adoption, anything to stop me going through that. But he said he didn’t trust me to give the baby up, and it had to end with abortion. I hate it so much that he had that much control over me”.

She went on to describe how her boyfriend and his friend drove her to the abortion facility where she was left; alone, defeated and broken to face the abortion. She still remembers panicking that if she changed her plans, she knew she would have no way of getting home.

“Afterwards, I waited for hours for him to collect me and drive me home. When he did finally turn up, I was told that he was going to leave me there, with no way home, but his friend convinced him it would be cruel”, she recalled.

How many other women behind Britain’s surging abortion statistics have similar stories to tell? How many others have been used, abused and abandoned in the same appalling way by men who refuse to take responsibility, conveniently and selfishly using abortion as a get out clause?

But Hayley also had a message of hope for women struggling after abortion. After years battling substance abuse, eating disorders, and even suicide ideation following the abortion, she experienced healing last year when she attended Rachel’s Vineyard, a Christian retreat which runs in the UK for post-abortive women.

“I told my story from start to finish for the first time ever. I was heard, I was listened to”, she said.

Amrita was another UK speaker who shared her own direct experience of a crisis pregnancy. The young mother, whose story was featured in a Daily Mail article last year, took the first abortion pill only to experience instant regret.

“Within seconds, I just instantly regretted it. I just sobbed and cried. I broke down, and [realised] ‘I want this baby more than anything”.

Through a pro-life organisation, she contacted Dr. Dermot Kearney (who also spoke at the rally) who prescribed her with progesterone, also known as ‘the abortion reversal pill’.

Thankfully, the progesterone worked. There was cheering when Amrita showed the crowd her beautiful, healthy, baby girl.

“Having a child is the biggest blessing anyone could have,” the proud young mother declared. “A lot of young people don’t know [the truth]. My view on [abortion] has totally changed”.

She is one of over 30 UK women whose children’s lives have been saved through the little-known but life-saving treatment, offered by only a handful of doctors in Britain.

Shawn Carney, founder and CEO of 40 Days for Life, also addressed the March, beginning with a resounding: “Greetings from an abortion free Texas!”

He went on to remind those present of the words of Mother Teresa; ‘When America ends abortion, the world will follow.’ 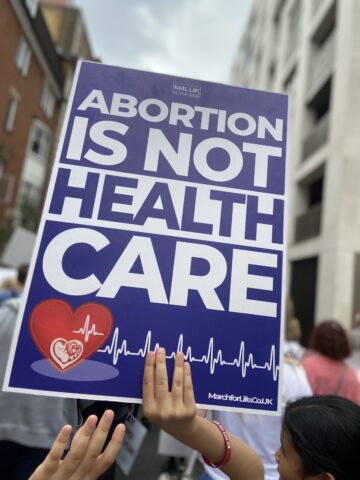 As Madeline Page, CEO of The Alliance of Pro-Life Students pointed out at the March, the overturning of Roe v Wade in America has reignited a debate on abortion that some thought was a closed book, and has helped pro-lifers find their voice, even in places like Britain.

‘We’ve seen a steady increase in the amount of young people wanting to take part in pro-life events since the news from America, many of these are stepping out for the first time and feel that since this issue is being talked about more, it’s now acceptable to disclose their beliefs”, she said.

It’s an observation which stands true. On the plane on the way home, speaking to one man who asked if we were doing anything in particular in London, on learning we were at the March for Life, he told us that ten years ago, he would have thought we were crazy. Now, he said, not so much. More and more people are starting to realise that the pro-life position is a scientific, reasonable, and compassionate one, with the equal welfare of mothers and babies at its core.

Despite years of permissive abortion legislation and an ongoing culture of abortion, the peaceful, dignified, inspiring and impassioned witness of those at the March for Life UK, and the speakers who addressed it, should instil concrete hope in the hearts of pro-lifers. The pro-life movement in Britain has indeed found its voice, and it’s not going away anytime soon.