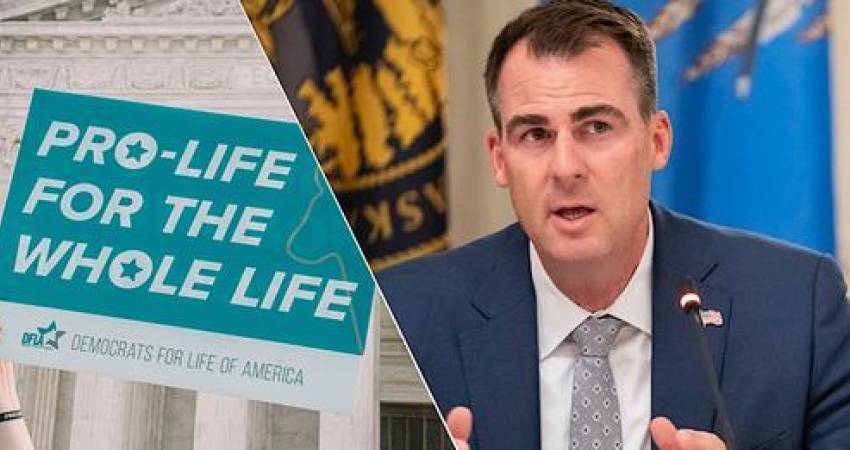 Oklahoma Governor Kevin Stitt has signed a Bill into law that protects life from conception, in what has been described as the strongest piece of pro-life legislation in the US.

Stitt, a Republican, signed House Bill 4327 into law on Wednesday, which outlaws physicians performing abortion at any point in a pregnancy, unless medical intervention is ‘necessary to save the woman’s life’.

The new law has immediately gone into effect in the state which is bordered by Texas in the south and west after being signed. CBS News reported that two of Oklahoma’s four abortion clinics have already stopped performing abortions.

In a statement, Stitt reminded Oklahomans of his promise to uphold his pro-life mandate, adding that “as human beings”, there is a responsibility to protect all human life.

“I promised Oklahomans that as governor I would sign every piece of pro-life legislation that came across my desk and I am proud to keep that promise today,” he said

“From the moment life begins at conception is when we have a responsibility as human beings to do everything we can to protect that baby’s life and the life of the mother.

That is what I believe and that is what the majority of Oklahomans believe. If other states want to pass different laws, that is their right, but in Oklahoma we will always stand up for life,” he added.

The law, however, does include an exemption if the pregnancy is a result of rape, sexual assault or incest that has been reported to law enforcement.

Under the new law, private citizens can file civil lawsuits up to $10,000 against anyone who performs or assists in performing an abortion; it does not allow the woman seeking an abortion herself to be sued.

“There can be no higher cause for you and I to address in this body, Madam Speaker, than the protection of innocent unborn life.”

The legislation later passed in the house by 73 votes to 16.

Pro-abortion rights opponents have blasted what they have labelled as an inconsistent message when it comes to valuing life.

However, pro-life non-profit Live Action hit back at criticism of the law including from Planned Parenthood CEO, Alexis McGill Johnson, tweeting: “The whole point of outlawing abortion is to make communities safer. Sorry you won’t be able to profit from killing the kids of desperate mothers.”

The national organisation described the law as “one of the strongest protective measures for preborn children in law” and “a great step for human rights.”

However, the group did direct criticism towards the exceptions included in the legislation, stating:

“There are unfortunate exceptions for rape and incest with a police report & the law doesn’t impact plan B or contraceptives (which can function as abortifacients), but the abortion pill & all other abortions are banned in the state. Every child has an absolute right to live.”

Senate Bill 1503, also referred to as the Oklahoma Heartbeat Act, is a pro-life law similar to what is in place in Texas. It opens up physicians to civil lawsuits if they perform abortions after a heartbeat can be detected – around six weeks into a pregnancy. Like House Bill 43267, it also went into immediate effect after Stitt signed it.

While opponents of the Oklahoma Heartbeat Act have attempted to stop the law from going into effect, the Oklahoma State Supreme Court has rejected an injunction while waiting to hear lawsuits filed against the law.