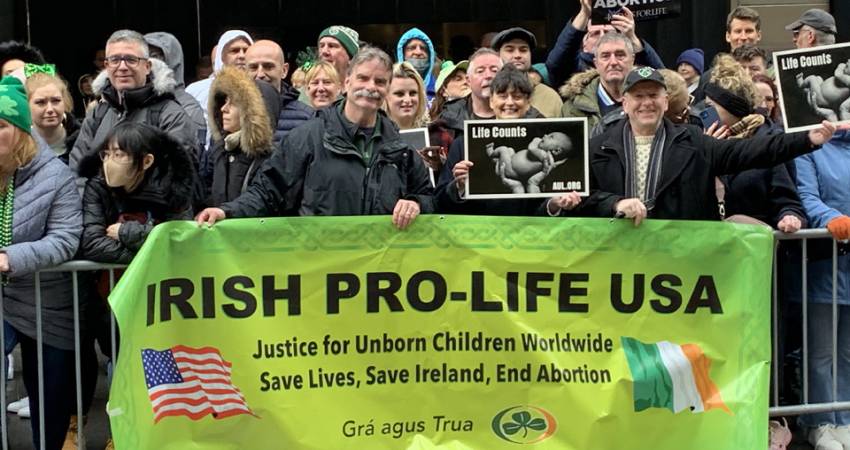 
A coalition of pro-life activists gathered on the sidewalk across from St Patrick’s Cathedral here today to bring attention to the abortion crisis. Organizers of the rally, hosted by Irish Pro-life USA, urged that a pro-life group, marching with its own banner, be included - and not excluded- from the parade honouring St Patrick.

“We are shocked and bewildered as to why the parade organizers do not rush to allow a pro-life group march in this massive parade honouring St Patrick, Patron Saint of Ireland and of the Archdiocese of New York,“ said John Aidan Byrne, leader of Irish Pro-Life USA. “We urge the parade leaders to show courage, backbone and fortitude in the face of any pro-life hostility it may be facing in the ranks of government and City Hall.”

During the parade, New York City police officers and reps acting, they said, on instructions from superiors, repeatedly demanded the pro-life rally organizers remove its Irish Pro-Life USA banner from a parade barrier.

“We have a constitutional right to attach our [Irish Pro-Life USA] banner to the barrier,” pro-life activist Phil McManus, repeatedly reminded the police officials. McManus, a retired Irish-American NYPD officer himself, said the pro-life group along Fifth Avenue was not violating any laws. “We are here to defend the unborn,” he added. The banner remained attached to the barrier during most of the rally.

John Aidan Byrne, of Irish Pro-Life USA, said the pro-life rally was warmly greeted by several parade officials as well as throngs of marchers up Fifth Avenue in the line of march, presumably acting on their own personal capacities as supporters of the inviolable right to life of the unborn. “This was beautiful pro-life witness at the parade today,” he added. “It was wonderful to get the big cheers and thumbs up from many marchers as we watched them from the sidelines. Clearly, they would welcome a pro-life group with its own banner in the line of march up Fifth Avenue.”

The pro-life rally received an endorsement from radio personality, Curtis Sliwa, founder of the Guardian Angels, an anti-violence crime prevention group, and a former NYC Mayoral candidate. “Great job everyone,” said Sliwa, as he stepped by to show his support. “Love what you’re doing,” he added before he departed to rejoin the parade.

“Our coalition of pro-life groups, individuals and families is gathering to show solidarity with the universal pro-life movement in opposition to the legalization of abortion Ireland and New York, across the US and worldwide.  On the Feast of St. Patrick, Patron Saint of Ireland and of the Archdiocese of New York,  we pray for the end of tax-payer funded and legalized abortion in Ireland and New York, and that resources and political attention focus instead on assisting mothers and families coping with crisis pregnancies. We urge that the New York City St. Patrick’s Day Parade organizers include—and not exclude—a pro-life group marching with its own banner, in the line of march at the annual NYC St. Patrick’s Day Parade. We also urge the Irish government to listen to the many voices of compassion and decency in the pro-life community as it conducts its Three Year Review of Ireland’s abortion law, which was enacted on January 1, 2019. Finally, our thoughts and prayers are with all who are suffering and have lost their lives because of the brutal conflict in war-torn Ukraine. ”

Credit: John Aidan Byrne. Dawn Eskew (left), leader of Personhood NY, with a parade official who, in her personal capacity, stopped by the pro-life rally on the sidelines of the 2022 New York City St. Patrick's Day Parade on Thursday, March 17, to show her support. A pro-life group carrying its own banner is not permitted to march in the parade.

US-based grassroots movement of pro-life activists and friends of Ireland in America, promoting the universal protection and the unique dignity of all human life