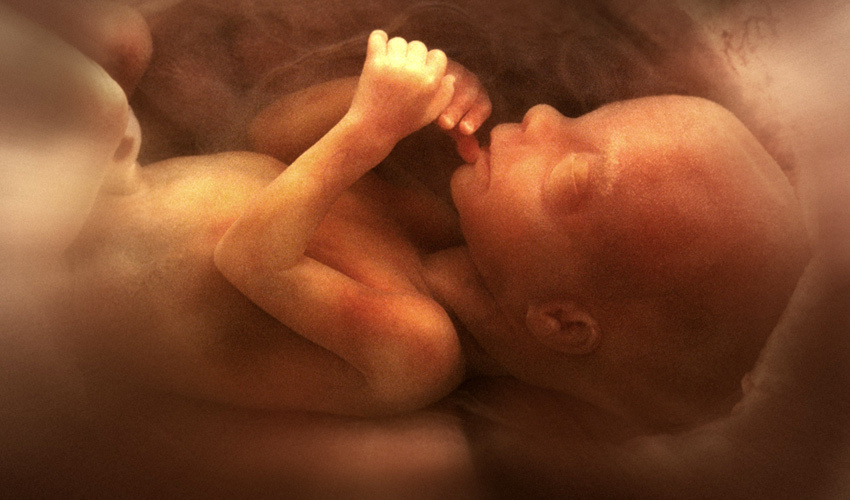 Amazing Facts of Life before Birth

From the moment of conception, 46 chromosomes with 30,000 genes combine to determine all your physical characteristics: sex; facial features; body type; color of hair; eyes and skin

Even more amazingly, intelligence and personality - the way you think and feel - were already in place within your genetic code. At the moment of conception you were essentially and uniquely you!

You progressed from a single cell to a tiny human being with all organs present and functioning. The rest of your time in the womb was devoted to refinement, growth and practice. While still in the womb you began to move, swallow and "breathe" amniotic fluid, to react to stimuli and generally prepare yourself for life on the outside.

Since the heart first started to beat at 18 days, the blood of the baby passes along the umbilical cord, runs through the placenta and approaches the maternal blood vessels found in the womb. Across the dividing wall, the two blood supplies exchange their gaseous loads; the baby passes to his mother his carbon dioxide waste and she passes to her baby oxygen and nutrients.

The baby has become sensitive and responds to touch. All five major areas of the adult brain are present. Brain function, as measured by EEG waves, has been recorded as early as 40 days.

Here the marvelous control center sends out messages to the mother and the baby. The head takes up about one third of the body's total volume but will begin to become more proportionate to the rest of the body as the baby grows older.

The baby lives inside a transparent membrane called the amnion sac. The sac is filled with a salty solution which bathes the body's cells. In a complex process - the body recycles the fluid, swallowing some, absorbing some, expelling some - while at the same time manufacturing most of it. The embryo floats almost weightlessly in the fluid so it is protected from shocks and does not have to fight gravity.

The arms begin to form at about 3 weeks and the fingers from 6 weeks on. The baby can close his fingers and thumb and he will open his mouth in response to pressure applied at the base of the thumb. At first when his hands touch his mouth the baby turns his head away, though his mouth opens. Later he may turn his head towards his hands and put his finger into his mouth to suck it. Finger nails are present at 7 months.

The baby's legs and feet develop a little latter then his arms and hands. At about 9 weeks, in response to a touch on the sole of his foot, he will curl his toes or bend his hips and knees to move away from the object. From 2 months, the footprints are already engraved in the skin. He starts to make slow movements, sharp kicks and small rhythmic kicks.

The baby is surrounded by loud noise such as his mother's heart beat or loud music. He responds to sounds in frequencies so high or low that they cannot be heard by the human adult ear, which suggests that sensory pathways other than the ear are implicated. He responds to different noises, including his mother's voice, and is in tune with the life-rhythm of his mother - he often wakes and sleeps with her.

Muscles within the orbit of the eye are present very early in pregnancy, and the baby's eyes move when he changes position and during sleep. Light penetrates through the uterine wall and amniotic fluid, and fetal activity increases in response to bright light. The eyelids will remain closed until the 7th month to protect the eyes. Repeated flashing of a light will quieten a preterm baby.

The baby starts making spontaneous movements at about seven weeks but the mother does not usually feel the baby moving until about 16 weeks. At 11 weeks the baby swallows the amniotic fluid and passes it back into his urine. He can also produce complex facial expressions and even smile. At 18 weeks he is active and energetic and does a lot of muscle-flexing. It can make an impressively hard fist and punches and kicks.

Fraternal twins are by far the most common types of twins. They result from two separate ova, from two different oocytes that are fertilized by two different spermatozoa during the same menstrual period. Each has its own placenta and its own complete bag of waters. Thus, each develops separately and simultaneously side by side. Such twins can be of the same or of the opposite sex. They may or may not resemble each other, and their genetic makeup is as different as that of a non-twin sibling.

Identical twins develop from the same ovum fertilized by a single spermatozoon. At a time close to fertilization, between the two-cell stage and the start of the third week, an anomaly occurs and the egg divides into two parts which develop separately. Depending on how early splitting of the zygote occurs, twins will either have separate placentas or will share a common placenta; this is the most frequent case. Such twins are always of the same sex, are physically very similar to each other, and possess the same genetic makeup.

Science has been studying the phenomena of fetal cell microchimerism for more than 30 years, after researchers at Stanford University were shocked in 1979 to discover a pregnant mother's blood containing cells with Y sex chromosomes. Since women only have X chromosomes, they concluded that the cells must have entered into her body from the male baby she carried within her.

Science writer Jena Pinctott explores this relationship in her October 2011 book "Do Chocolate Lovers Have Sweeter Babies?: The Surprising Science of Pregnancy." Drawing on studies in biology, reproductive genetics, and epigenetics, Pincott outlined in her book what science has learned since the Stanford discovery.

"During pregnancy," she wrote,

"cells sneak across the placenta in both directions. The fetus's cells enter his mother, and the mother's cells enter the fetus."

Scientists have discovered, she said, that a baby's fetal cells show up more often in a mother's healthy breast tissue and less often in a woman who has breast cancer (43 versus 14 percent).

Pinctott pointed out that as the quantity of fetal cells in a mother's body increase the activity of autoimmune conditions such as rheumatoid arthritis and multiple sclerosis decreases. She called the evidence "tantalizing" that fetal cells may offer the mother increased resistance to certain diseases.

One kind of fetal cells that enter into the mother's body is the baby's stem cells. Stem cells have what Pinctott calls "magical properties" in that they can "morph" into other types of cells through a process called differentiation. The baby's fetal stem cells can actually become the mother's own cells that make up her liver, heart, or brain.

In what any ethicist might declare to be legitimate 'embryonic stem cell therapy,' the baby's fetal stem cells migrate to the mother's injured sites and offer themselves as a healing remedy, becoming part of the mother's very body. Pinctott writes that such cells have been found in "diseased thyroid and liver tissue and have turned themselves into thyroid and liver cells respectively."

Genetics specialist Dr. Kirby Johnson of Tufts Medical Center, Boston, and professor Carol Artlett, a researcher at Philadelphia's Thomas Jefferson University, back up Pinctott's ideas. Their research shows that when a woman becomes pregnant she acquires an army of protective cells - what might be called a gift from her child - that remains with her for decades, perhaps till the end of her life.

Johnson and Artlett spoke to NPR's Robert Krulwich in a 2006 interview. In their research, Johnson found that a teaspoon of blood from a pregnant mother contained "dozens, perhaps even hundreds of cells... from the baby." Science has shown that at the end of a mother's pregnancy, up to 6 percent of the DNA in her blood plasma comes from her baby.

"One would expect them [the fetal cells in the mother's body] to be attacked fairly rapidly. You would expect them to be cleared within hours, if not days. What we found is that that is not the case, not anywhere near the case," Johnson said.

Both Johnson and Artlett defend the hypothesis that the baby's fetal cells have a beneficent purpose, not to hurt the mother, but to protect, defend, and repair her for the rest of her life, especially when she becomes seriously ill. "There's a lot of evidence now starting to come out that these cells may actually be repairing tissue," said Artlett.

Baby tells Mom when he or she is ready to born

Researchers at UT Southwestern Medical Center have identified two proteins in a fetus' lungs responsible for initiating the labor process, providing potential new targets for preventing preterm birth. They discovered that the proteins SRC-1 and SRC-2 activate genes inside the fetus' lungs near full term, leading to an inflammatory response in the mother's uterus that initiates labor.