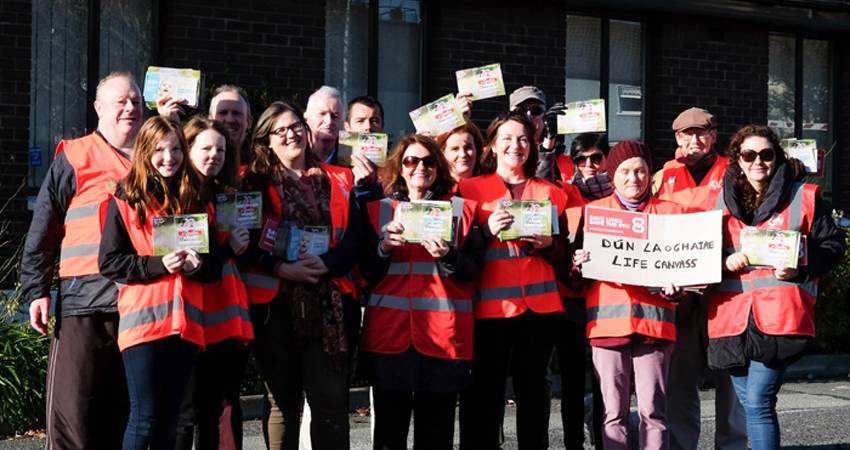 Up to a 1,000 pro-life volunteers in fifty towns and cities, in every single constituency across Ireland, turned out to knock on doors and have a one-to-one conversation with voters about life and abortion on Tuesday. The Life Canvass is eighteen months old and this bold move to set huge targets for a single day has provided organisers and volunteers with massive encouragement.

Life Canvass Day reached over fifteen thousand voters in one day with many groups also doing successful street canvasses during the morning and afternoon.

“It was so positive, many people really are bothered by the ongoing abortion propaganda and everyone who canvassed wanted to stay going” said Ron Rossiter after a team of twenty had spent the evening in the city's densely populated Loughboy area of Kilkenny.   Ciara Clark was even more positive after canvassing in Dubln. “The canvass confirmed that we are a Prolife country. It really was amazing and I left on a high, can't wait to go again next week!”   That positive nationwide response fed into the organisers upbeat assessment of the political landscape with spokesperson Niamh Uí Bhriain saying that Life Institute  “was confident of winning a referendum on the 8th” after the massive outreach. “This is real people power, and it’s being used for the best possible cause, to protect women and preborn babies.”  said the Uí Bhriain who said that she was delighted with the turnout and the response to the Canvass.   Many of the volunteers were attempting canvassing for the first time. “Of course, our first timers were nervous but they quickly found that people were open to listening and not at all hostile, “ said Katy Robbins in Dublin. “Everybody thinks it’s a lion’s den but they were all really surprised and delighted to discover not only could they talk to people, but voters wanted to talk.”   “All out first time canvassers want to go again” she said. “That is such a tremendous result”.   Bypassing the media to create a conversation about the 8th on the doorsteps has changed the tone of the political debate. With the numbers involved in that doorstep campaign growing, the Life Canvass is absolutely key to winning the referendum and Saving the 8th.

KEY MESSAGES SHARED on Social during the Day