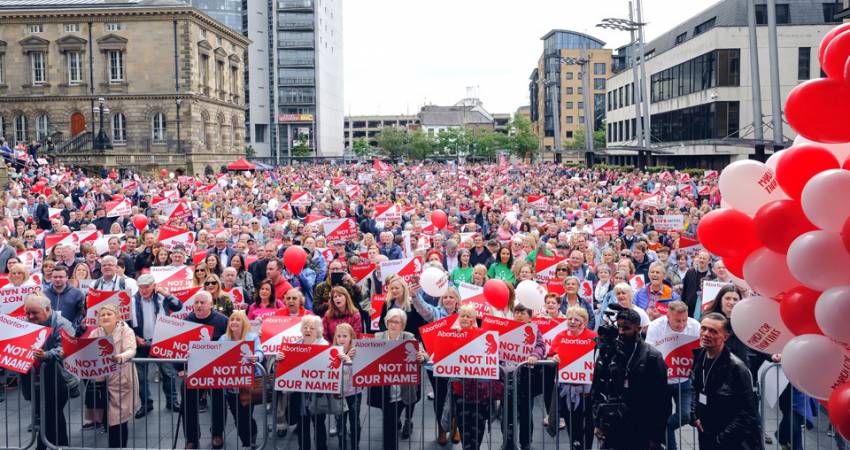 A new poll  has shown that only 5% of voters in Northern Ireland support introducing abortion to 24 weeks - which is what is being proposed by the Conservative government and Sinn Féin after last year's vote to impose abortion on the region.

The poll, organised by the University of Liverpool and Britain’s Economic and Social Research Council, found that 58% of Sinn Féin voters and 54% of DUP voters want the region's new abortion framework only to allow abortions when the mother’s life is at risk.

Only 5% of all voters support introducing abortion through to 24-weeks – despite plans to introduce this regime into Northern Ireland by the Conservative government after the passing of the Northern Ireland (Executive Formation etc) Act 2019 in Westminister.

Pro-life organisations said the findings were a clear rejection of the extreme proposed abortion framework that the UK Government wants to impose on the people of Northern Ireland.

Precious Life, the region's largest pro-life group said the polling showed the proposed abortion regime was being imposed on the people against their will, and was a breach of the democratic process and of natural justice.

Bernadette Smyth of Precious Life said most people "absolutely rejected the proposal to legalise abortion on demand and to see abortion for disabilities, including cleft lip, club foot and Down’s syndrome possibly available right through to birth."

The Right to Life UK organisation said the polling "demonstrates that the Conservative Government has no mandate from the people of Northern Ireland to go further than legally required when introducing Northern Ireland’s abortion framework".

"The proposed framework drops many of the current legal safeguards provided by the Abortion Act in England and Wales. The proposals open up abortion provision to any healthcare professional, which could include pharmacists, nurses, midwives, healthcare assistants, art therapists and dieticians. It also drops the requirement that two doctors sign off on an abortion.

"The proposal includes virtually no legal limit on the locations on where abortions can take place, potentially allowing for the home use of both abortion pills along with abortion provision in pharmacies, GPs surgeries, school nurse clinics, mobile abortion clinics and ‘telemed’ abortions," spokeswoman Catherine Robinson said.

“If the UK Government pushes ahead with their extreme abortion framework proposals, they would be undermining the devolution settlement at a time when it is already fragile. With Stormont restored, it is vital that the people of Northern Ireland have a say on their country’s new abortion framework through their elected representatives in the Northern Irish Assembly," she said