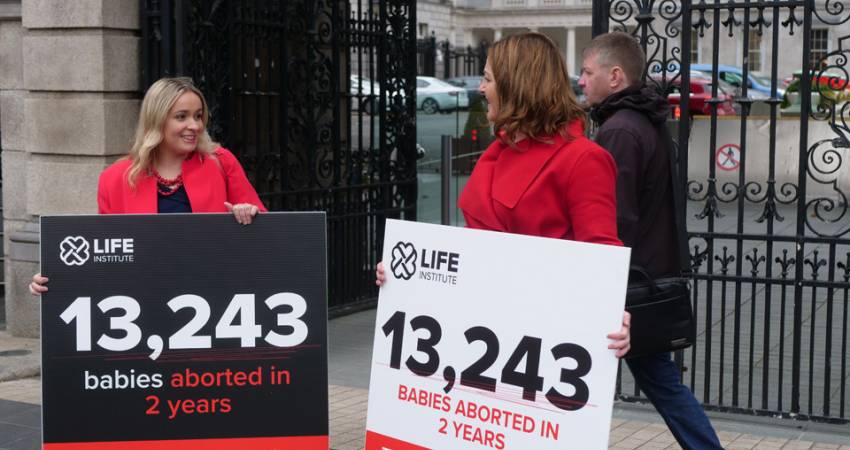 PR: Demonstration at Dáil will urge TDs to Rethink Abortion

A pro-life demonstration at Dáil Éireann on Wednesday, October 20th at 7.30 pm will urge TDs to #RethinkAbortion ahead of the review of the 2018 legislation which is currently underway.

The rally organisers, Life Institute, said that it was essential that a transparent examination of the shocking outcomes of the abortion regime took place in the review, in order to ensure it wasn't a "whitewash".

TDs, including Independent Carol Nolan and Aontú leader Peadar Tóibín, will address the event, as will Vicky Wall of Every Life Counts who is urging a full review of how parents are told their baby has a life-limiting condition given the revelations of the Baby Christopher case.

The rise in the abortion rate since the legislation took place will be a focus of the demonstration. Life Institute billboards drawing attention to the abortion rate, which have been posted around the country, are a centrepiece to the #RethinkAbortion campaign.

"Data published by the Department of Health tells us that 13,243 abortions took place in the first two years of the abortion regime, despite the fact that Leo Varadkar, who was then Taoiseach, promised voters that abortion would be "rare". And our campaign is reminding the public that the number of babies aborted in 2019 and 2020 is greater than the population of an Irish mid-sized town - greater, for example, than the population of Arklow," said Megan Ní Scealláin of Life Institute.

"But our TDs are ignoring these outcomes and don't want a public debate on these issues, so we're bringing this message to the Dáil to say that this review must examine the actual facts of the abortion regime. We don't want a whitewash of reality, and the Irish people deserve an honest appraisal," she said.

"Many people are responding to our #RethinkAbortion campaign who are shocked at the number of abortions that have been carried out - but they are also curious as to why there has been no public debate around the shocking rise in the abortion rate or around the fact that late-term abortions are happening, despite the promises that they would never take place."

Ms Ní Scealláin also said that the Minister for Health needed to take steps to reduce the abortion rate, instead of listening to abortion campaigners whose demands would see the already steep rise in abortions increase even further.

She said that music and the testimony of women whose experiences of abortion are being ignored will also be heard at the demonstration which would be attended by pro-life representatives from around the country.