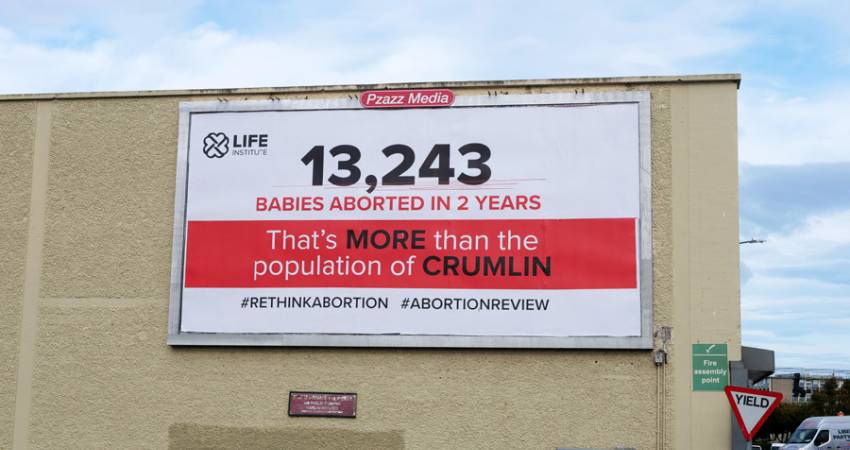 The Life Institute has called on the Social Democrats TD, Holly Cairns, to debate the rise in Ireland's abortion rate after she called for factual pro-life billboards - which revealed how many abortions had taken place in the last two years -  to be banned.

The Irish Examiner reported that Ms Cairns and other abortion advocates had called on "Minister for Health, Stephen Donnelly to outlaw such adverts", with the Social Democrat TD claiming that the billboards were "misleading".

"The only thing misleading about this farcical attempt to shut down debate is the ridiculous but revealing claim made by Ms Cairns," said Niamh Uí Bhriain of the Life Institute.

"Our billboards present a simple fact, using data published by the Department of Health. They inform people that 13,243 abortions took place in the first two years of the abortion regime. They point out that Leo Varadkar, who was then Taoiseach, promised voters that abortion would be "rare". And they remind the public that the number of babies aborted in 2019 and 2020 is greater than the population of an Irish mid-sized town - greater, for example, than the population of Arklow."

"We've had a huge response to these billboards, and people are shocked at the number of abortions that have been carried out. They are also curious as to why there has been no public debate around the shocking rise in the abortion rate. That's the real issue here: abortion campaigners - including some TDs - don't seem to want the public to know the facts about the abortion rates in this country, and that's very curious. It's not what's on the billboards that worries them, its what the public reaction might be, because many people who voted yes with a heavy heart are horrified at the abortion rates," she said.

Ms Uí Bhriain said that Holly Cairns and Labour TD Duncan Smith were joining with abortion campaigners and taxpayer-funded NGOs to "shut down debate" and "were acting like bullies".

"We have some of the most powerful people in the country, TDs and taxpayer-funded NGOs like the National Women's Council, railing against these entirely factual billboards. They are acting like bullies and they simply want to shut down debate. We will debate Holly Cairns anytime and in any place regarding the message of this billboard," the Life Institute spokeswoman said.

She also called on the Minister for Health to ensure that the upcoming review of the abortion legislation examined the rise in the abortion rate and sought to reduce the number of abortions. "All reasonable people will want to see fewer abortions," she said. "Only the extremists want to see more abortions taking place".

Life Institute's billboard campaign, which will be complemented by door to door leaflet drops, and social media initiatives, urged TDs and the public to "RethinkAbortion" ahead of the three year review which is expected to take place this autumn but which seems to be behind schedule.

"We need to have a full and transparent debate on the outcomes of the abortion regime thus far, " Niamh Uí Bhriain said. "We've had the shocking rise in the number of abortions, late term abortions taking place, the horrific Baby Christopher case where a little boy was aborted after a misdiagnosis - an outcome his parents clearly felt pushed towards. Where is the debate around these outcomes?"

"Our billboards prompt that debate, and of course, that's what Ms Cairns and her fellow abortion supporters find disquieting. Their use of the word "misleading" is entirely baseless but it is being lapped up by elements of the media who are as eager to publish any criticism of billboards as they are to ignore our campaign urging the Irish people to #rethinkabortion," she said. 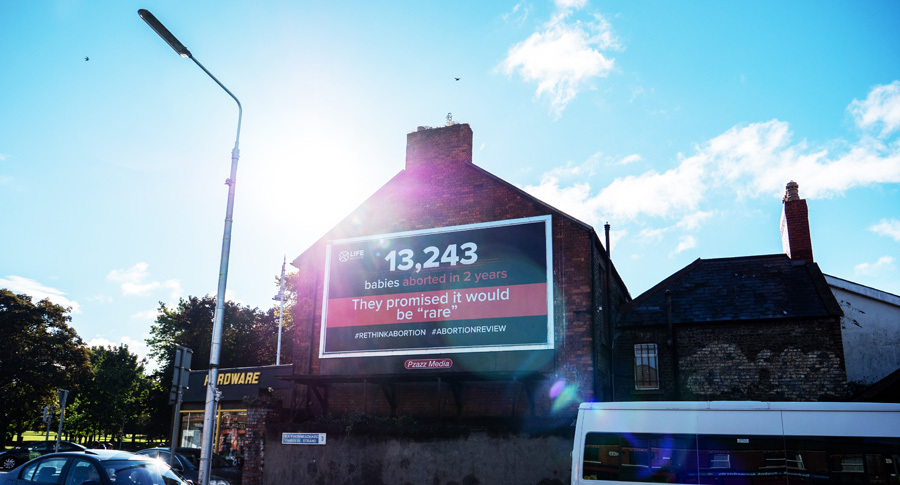 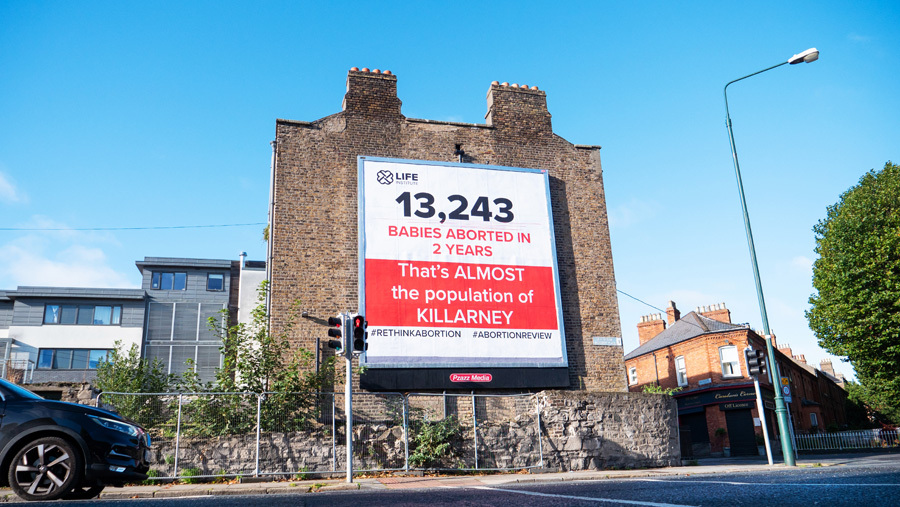 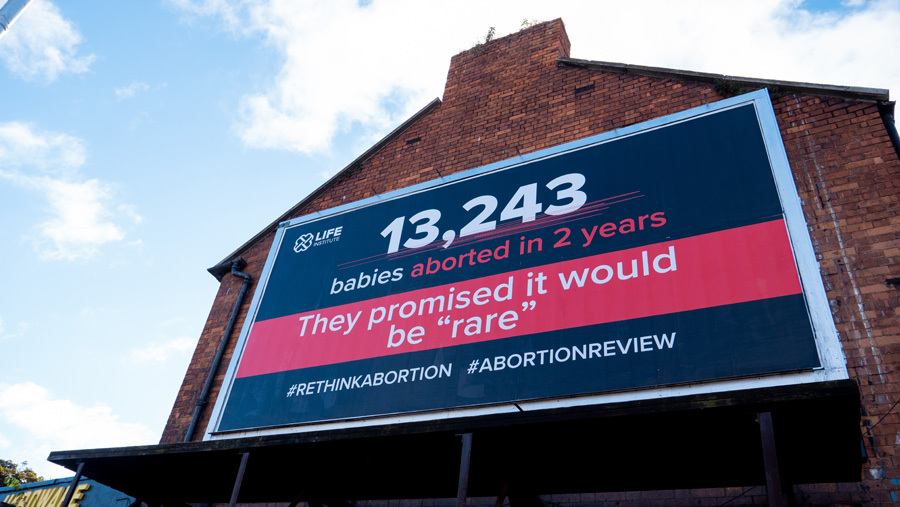 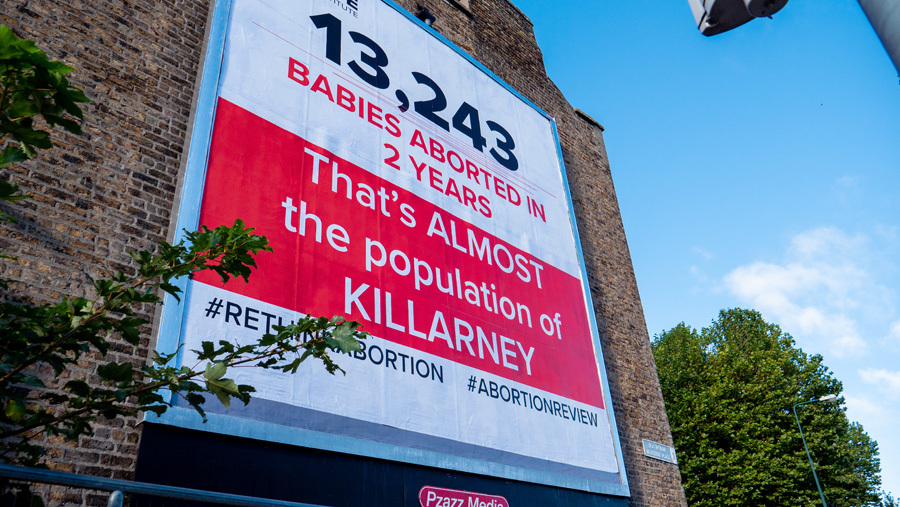