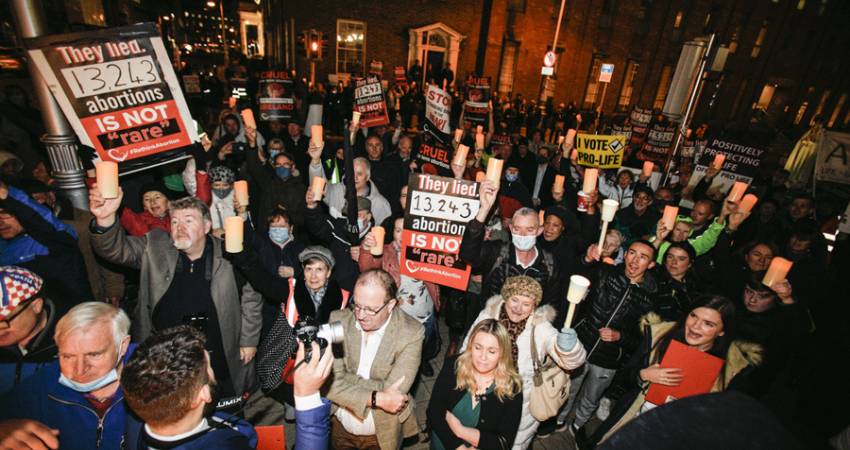 Abortion review must not be whitewash, pro-life rally at Dáil hears

Hundreds of people have attended a pro-life demonstration at Dáil Éireann Wednesday evening (Oct 20th) which urged TDs and Senators to #RethinkAbortion ahead of the review of the 2018 legislation which is currently underway.

The rally organisers, Life Institute, said that it was essential that a transparent examination of the shocking outcomes of the abortion regime took place in the review, in order to ensure it wasn't a "whitewash". Spokeswoman Niamh Uí Bhriain told the crowd that one of the most "shocking outcomes" of the legislation was the sharp rise in the number of abortions after repeal.

"There are 18 abortions every day, 128 every week, 6,666 in the first year and 13,243 in just two years," she told the crowd."Voters were told abortion would be 'rare' but they can now see that's not true. The equivalent of 260 classrooms of children are being aborted every year. Many people who voted Yes are shocked at this outcome - and disturbed that the goverment is doing nothing to reduce the abortion rate, or offering women a better answer."

TDs and Senators including Independent Carol Nolan, Aontú leader Peadar Tóibín, Independent Michael Collins and Senator Sharon Keogan, addressed the event, as did Vicky Wall of Every Life Counts who is urging a full review of how the culture in maternity hospitals may be pushing parents towards abortion in light of the revelations of the Baby Christopher case.

Life Institute billboards drawing attention to the abortion rate, which have been posted around the country, are a centrepiece to the #RethinkAbortion campaign being highlighted by the Rally.

"But our TDs are ignoring these outcomes and don't want a public debate on these issues, so we're bringing this message to the Dáil to say that this review must examine the actual facts of the abortion regime. We don't want a whitewash of reality, and the Irish people deserve an honest appraisal," she said.

Ms Ní Scealláin also said that the Minister for Health needed to take steps to reduce the abortion rate, instead of listening to abortion campaigners whose demands would see the already steep rise in abortions increase even further.

Carol Nolan TD said that if the government accepted the demands of abortion campaigners who are seeking the abolishment of the 3-day waiting period for women seeking a termination, the numbers of abortions would rise.

"Figures released to me by the Department of Health showed that 870 women changed their mind after the first consultation during the three-say reflection period, and did not proceed with the abortion. I think all reasonable people will accept that is a good thing  - but if the 3 day reflection period is scrapped, we'll have more abortions taking place."  She said that the TDs in the Dáil should also take 3 days to reflect on what the abortion legislation had produced and act with compassion to prevent abortion.

Peadar Tóibín TD, leader of Aontú, said that the media's reluctance to highlight outcomes like the rise in the abortion rate, and their failure to cover pro-life events and campaigns was reminiscent of the regime in East Germany.

He urged pro-life activists to get active and organised and told them: "we need more of you in Leinster House".

Michael Collins TD told the crowd that pro-life TDs would fight "tooth and nail for you, and to save the lives of babies, that's what we're here for". He said that it was incredible that some TDs wanted to expand the abortion law, but that "while there was a breath in my body I will fight for the right to life".

Senator Sharon Keogan said that it was imperative that the abortion review process be fair, and urged the young people present to make their voices heard.

A traditional slow air was played during the Rally while roses were laid representing the lives lost to abortion.

Testimonies of women who had experienced abortion or had sought assistance from pregnancy support group, Gianna care, were also read to the Rally. One woman's testimony described her experience of using the abortion pill as "excruciating" and spoke of seeing her child afterwards. David Manly of the pro-life group Family & Life also told the crowd that the culture would swing back if they "held the course and fought the good fight."

"Women are not being best served by this rush to abortion," Niamh Uí Bhriain said. "We need to rethink this cruel regime."