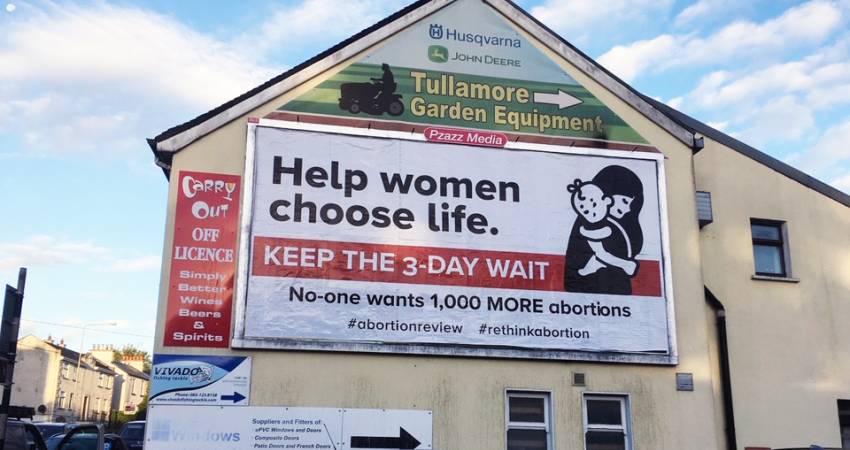 A new billboard campaign from Life Institute is urging that the 3-day waiting period before undergoing an abortion be retained, and the group says data suggests that scrapping the period for reflection may bring another sharp rise in the abortion rate.

The billboards, which can be seen in Dublin, Cork, Limerick, Waterford, Kerry, Galway and elsewhere, reference the ongoing review of the abortion legislation, and says that retaining the 3-day wait period will 'help women choose life'.

The message adds that 'no-one wants 1,000 more abortions," and the organisation says it is part of a 'Time to Think' campaign strongly opposing calls to remove the period of reflection from the abortion legislation.

Megan Ní Scealláin of Life Institute said that data released to Carol Nolan TD and Peadar Tóibín TD suggested that an average of 1,000 women every year changed their mind during the 3-day period between the first visit to a GP and returning to procure abortion pills.

"Voters were promised in 2018 that the 3-day period would be part of "strict guidelines" around the operation of the abortion act. The then Tánaiste Simon Coveney said that these "strict guidelines" were important in persuading what he called "middle ground" voters who had a "traditionally pro-life" perspective to support the repeal. How can the government now be giving a sympathetic ear to those who want the 3-day wait scrapped?" she said.

"Abortion campaigners. including the National Women's Council, are pushing for the three day waiting period to be scrapped, but their demands ignore what we know to be true about the 3 day wait period - that it seems to reduce the number of abortions taking place," she said.

"Figures released in response to a parliamentary question from Carol Nolan suggest that, in 2020 alone, almost 20% of women who attended GPs and clinics seeking an abortion subsequently changed their mind and did not go ahead with the procedure," the Life Institute spokeswoman said.

Carol Nolan TD previously asked the Minister for Health for information regarding “the number of initial consultations for the termination of pregnancy services that were provided by general practitioners, family planning clinics and women’s health clinics in 2020”.

The HSE responded that “In 2020, there were 8,057 initial consultations for Termination of Pregnancy services." Contrasting that information with data from the Department of Health which revealed that 6,577 abortions were carried out in 2020, Deputy Nolan said that it seemed more than 1400 women had changed their mind and did not go ahead with an abortion.

That amounted to 18.4% – or almost one in 5 women – who did not proceed with an abortion after the initial consultation.

Similarly, in 2019, 7,536 initial consultations were provided while 6,666 abortions took place, suggesting that some 870 women changed their mind during the 3-day waiting period.

"So its very likely that we could expect a rise in the number of abortions taking place if the waiting period was scrapped. And the obvious question is why on earth any reasonable person would want that?" Ms Ní Scealláin said. "What reasonable person would want the already shocking abortion rate to rise further? No-one wants 1,000 more abortions on top of the almost 7,000 abortions now carried out in Ireland each year."

She said another Life Institute billboard focused on the 21,000 abortions that has taken place under the legislation thus far.

"At least 21,000 babies have been aborted according to Junior Minister Mary Butler," said Ms Ní Scealláin. "That is more than the population of Sligo, one of the bigger population centres in the West. And that's the death toll from just three years."

"Or think of it this way: if the average size of an Irish classroom is 24 children, then Ireland has already aborted 875 average classrooms of children. They will never sit fidgeting, or draw messy pictures with crayons, or play games at morning break, because their lives were ended before they were born," she said.

She urged the health minister to provide supports to women "to empower them to choose life" and said: "Stephen Donnelly needs to realise that for many women in crisis, abortion is not a choice at all".

Life Institute say that the billboard campaign is a centrepiece to an escalation of pro-life activity, including local newspaper adverts, social media campaigns and door-to-door leaflets.