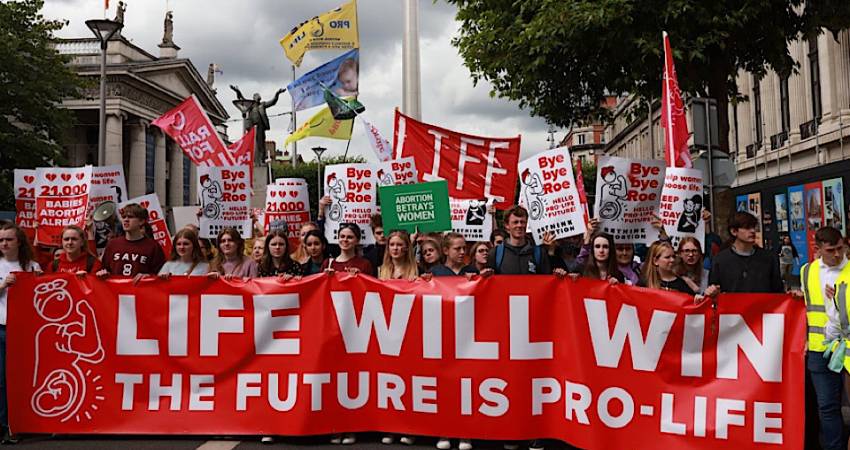 “ROE V WADE IS OVERTURNED: COME ON IRELAND, ITS YOUR TURN”

Organisers of the Rally for Life in Dublin on Saturday have said they were “delighted” with the “energy and optimism” of those attending the event, after thousands of people packed O’Connell Street and the quays in a colourful display of pro-life strength ahead of the Abortion Review in autumn.

The aim of the rally was to hold the Irish abortion law to account, spokeswoman Megan Ní Scealláin said, in view of the “horrific outcomes of that legislation thus far, with 21,000 abortions taking place despite assurances that it would be rare.”  She also said that the government had broken its promises to voters in regard to late-term abortion, and to disability abortion.

Billed as the biggest pro-life gathering of the year, the in-person national Rally for Life returned after three years featuring online and local rallies because of Covid restrictions and the organisers say it exceeded expectations.

“The Rally for Life is back with a bang,” Ms Ní Scealláin told Gript Media, “and the momentum and energy from this day will carry the movement into a Summer of Action around a new campaign addressing the terrible outcomes of the abortion law.”

As the rally moved down O’Connell Street with flags and banners, young marchers chanted “Roe v Wade is overturned. Come on Ireland, it’s your turn”. Spokeswoman for Life Institute, Niamh Uí Bhriain, who addressed the Rally, said the US Supreme Court ruling was “a tremendous victory as part of a global trend giving fresh momentum to the pro-life cause”.

A campaign to retain the 3-day waiting period before undergoing an abortion was launched at the Rally for Life. “Voters were guaranteed that women would have a 3-day period to reflect between a first abortion appointment and the doctor giving the abortion pill, and it is appalling to see abortion campaigners now push to have that time to think scrapped,” spokeswoman Megan Ní Scealláin said.

“We know from figures released to Carol Nolan TD that between 800 and 1000 women did not proceed with an abortion after that initial appointment. Scrapping the requirement for those 3 days to think might mean another 1000 abortions a year – increasing an already disturbingly high number of abortions? Who would want more abortions to take place? It’s inexplicable and utterly heedless to the needs and rights of both mother and baby. The 3-day period of reflection must be retained – and our Time to Think campaign will gather momentum with an advertising and social media campaign over the summer,” she added.

The campaign was announced to the Rally to sustained applause, with MC Becky Kealy urging those present to get involved. “Stand for Life. Save Lives. Give women time to think.” she said.

“Show this government that they can’t break their promises – and that the pro-life movement hasn’t gone away”.

Ms Ní Scealláin said that the primary message of the Rally for Life was that it was time for the public, and the government, to Rethink Abortion.

“I know that even a lot of people who voted Yes are horrified by the shocking rise in the abortion rates, with Junior Minister Mary Butler telling the Dáil that at least 21,000 abortions have taken place in just three years, despite assurances from then Taoiseach Leo Varadkar and others during the repeal campaign that abortion would be ‘rare'” she said.

“We also know  – from the doctors involved in performing the abortions – that late-term abortions are taking place in Ireland, with no pain relief for the baby. Then we have evidence that parents are being pushed to abort after a diagnosis of severe disability. The Abortion Review must honestly and transparently examine these outcomes,” Ms Ní Scealláin said.

Niamh Uí Bhriain of the Life Institute told the crowd that recent events in the U.S. and elsewhere, such as the overturning of Roe v Wade, have given fresh momentum to pro-life initiatives worldwide, and shown that culture and law can be changed for the better.

“We have renewed hope and energy and a sense of excitement, but more than that we know the importance of defiance – of refusing to bow down to the establishment, of being unafraid of be counter-cultural when that’s what it takes to end abortion,” she said.

“People are excited to be part of this major celebration of Life at the rally this time,” Megan Ní Scealláín said.

“The overturning of Roe v Wade shows the power of perseverance and that culture can change. We can ensure better options for mothers and babies. We’re seeing too that change is possible in Poland, in Hungary and in Croatia, where polls show that 60% of doctors now won’t perform abortions and political support for change is growing.”

One of the speakers at the Rally was  Eden McCourt from the UK, a young pro-life feminist who says abortion is rooted in misogyny, and who is one of a new generation of young pro-life voices demanding change. She told the thousands packing Custom House Quay that opinion is shifting in Britain too, and that polls showed voters favoured new restrictions on abortion. Her words were echoed by Sarah Ekada of Family and Life who said that young women were realising that abortion did not serve or empower women.

Pro-life TDs, Independent Carol Nolan, and Peadar Tóibín of Aontú, also addressed the Rally for Life, and drew attention to the Fetal Pain Bill which seeks to mandate pain relief for unborn babies in late-term abortion, and the paucity of resources to help women in crisis continue with their pregnancies, amongst other issues.

The Rally also heard from Vicky Wall, a bereaved mother and spokeswoman for the support group, Every Life Counts, who said the case of Baby Christopher, a baby aborted in the National Maternity Hospital after a mistaken diagnosis of Trisomy 18 is “deeply worrying”.  Ms Wall, whose baby girl Líadán, suffered from the same condition, said the case warranted a “serious investigation” into parents coming under pressure to abort their baby after a poor diagnosis, and said that the issue “cannot be swept under the carpet”.

Dr Dermot Kearney, an Irish cardiologist practising in the UK as an NHS consultant, told the march about his decision to help women who were looking for Abortion Pill Reversal – and how he persevered in the face of a campaign to have him struck off for assisting women. The case against Dr Kearney was thrown out by the British High Court and 32 doting mothers have thanked him for providing them with real choices.

Other speakers include Bernadette Smyth of Precious Life – the leading pro-life group in the North  – who said that Sinn Féin’s assertion after Repeal that ‘The North Was Next’ would come back to bite them as the campaign to overturn abortion in Northern Ireland gained momentum.

“The Rally is always a major celebration of Life,” said Ms Ní Scealláin, “with balloons and face-painting for the kids and music and banners and flags, and local pro-life leaders will take the posters home and use them as part of a Summer of Action being organised for the Rethink Abortion 2022 campaign.”