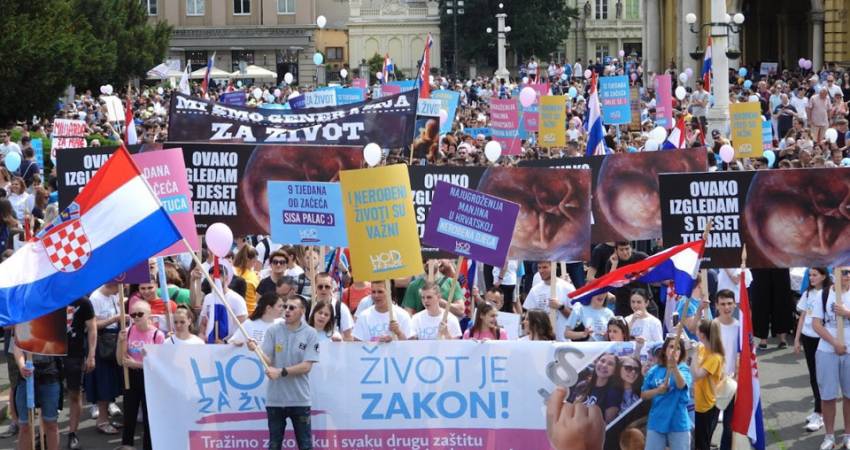 Thousands have rallied in Croatia at a series of pro-life marches to oppose abortion and support the right to doctors to refuse to perform abortions as a matter of conscience.

In Zagreb, where the largest of the ‘Walks for Life’ was held, organisers said that they gathered to “show love to both mother and child” and to call for “new legal protections for unborn babies”, in the wake of a controversial case where an abortion was sought at 24 weeks because the baby had a severe disability..

Andrea Duvančić from the organising team said that the procession were being held in 11 cities across Croatia, which has seen a significant rise in pro-life activity in the past decade as campaigners and legislators seek to address the country’s abortion rate.

“Caring for an unborn child requires the love of the mother and the support of the family, the local community and society as a whole,” Ms Duvančić told the large crowd.

“Science and experience have shown that a child needs love, towards mother and unborn child, love of father and mother, love of family, support of community and this whole society and that is why we came together to show that love.”

She also called for a “new legal framework” which recognised advances in science and a modern understanding of the humanity of the unborn child.

“Experience and science confirm that love, family and community support are key to care. We love both mother and child. We share responsibility for laws protecting the most vulnerable and the weakest. When we see that there are advocates for child killing, it’s clear that a new legal framework based on science is needed, not on the ideology and culture of death “, she said.

Abortion is legal on demand until the tenth week of pregnancy in Croatia and after that on disability and other grounds. The existing law dates back to 1978, when the country was part of the Communist-run former Yugoslavia.

A Croatian woman, Mirela Čavajda, sought an abortion after discovering her baby had a brain tumour. The woman is 24 weeks pregnant, and sources say that many doctors baulk at aborting a baby at that gestation. The Royal College of Obstetricians and Gynaecologists in  Britain recommend the use of feticide for babies at this stage, where the unborn child receives a lethal injection to the heart.

At the Walk for Life on Saturday, one mother, Tea Bekavac, shared her story about the loss of a child from the stage. She says that when she learned her baby had a life-limiting condition she felt initially that her ‘world had collapsed’.

“We wondered why us,” she said, adding that she and her husband decided to do their best for their baby girl who lived for two months.

“We were with her in her last moments. She left in peace. We did our best for her. That is why I have peace today and I live in peace,” she told the pro-life rally.

One doctor at Saturday’s “Walk For Life” rally in the capital Zagreb said he refused to perform abortions as a matter of conscience. Surveys suggest that more than half of Croatia’s gynaecologists have a similar stance. In 2014, 54% of the medical personnel refused to carry out abortions on grounds of conscientious objection, rising to 59% in 2019.