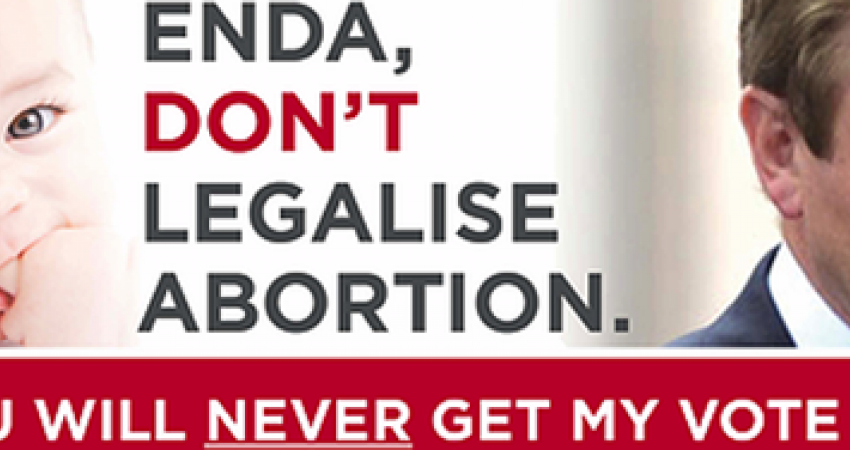 (A version of this article appeared in The Journal)

A second opinion poll in rapid succession shows that public support for Fine Gael is now on a downward spiral, and that the party has now been overtaken by Fianna Fáil.

The figures are startling: Fine Gael, who almost won an overall majority in 2011, have now crashed to 25% in the polls. Satisfaction with the government is at a miserable 18%, and Enda Kenny has sunk to a satisfaction rating of 29%.

The party faithful may well feel that they are being hammered for making difficult decisions during an unprecedented recession.

But Fine Gael needs to realise that they are also making bad choices - and those choices are losing them vital support. At a time of unprecedented economic crisis in Ireland, Enda Kenny's big idea for the country has been to propose the legalisation of abortion.

In doing so he is dragging Fine Gael into a kamikaze mission which will permanently crash and burn the party for many motivated and highly engaged voters. Fine Gael explicitly promised supporters in Election 2011 that they would not legislate for abortion, and voters remember electoral pledges.

The party's strategists will be frantically reviewing these polls, which show that Fine Gael could lose almost 40 seats if the decline continues.

In order to pull back from a course of self-destruction, they will need to identify exactly what factors are losing the party votes. And the evidence shows that one of those factors is abortion.

Commenting on one recent poll, Damian Loscher of Ipsos MRBI listed abortion proposals as one cause for a fall in support for Fine Gael amongst key voters.

That revelation came on the heels of a finding in an earlier poll by Behaviour and Attitudes which showed that support for abortion propositions was highest among Labour party supporters, but lowest among Fine Gael voters at just 42%. Kenny is not listening to his base on the issue of the sanctity of human life. And that brings us to the crux of this matter.

LABOUR BEING ALLOWED TO CALL THE SHOTS ON THIS ISSUE

On this issue, Enda Kenny is letting Labour be the tail that wags the dog.

Labour are pushing hard for this government to legalise abortion. Despite the serious and persistent misgivings of many Fine Gael TDs and Senators, the Taoiseach is allowing Labour to call the shots on an issue that not only divides the nation, but has the potential to split Kenny's party in two. It appears that the pilot has lost control of the plane.

Ceding that control to Labour (who have also crashed in the polls) means Enda Kenny is dragging Fine Gael into an unnecessary political and cultural conflict. Younger and more outspoken Fine Gael TDs and Senators are opposed to the legalisation of abortion. Junior Minister Lucinda Creighton has publicly expressed serious concern on an almost weekly basis on the issue.

The Joint Oireachtas Committee hearings on abortion were also a disaster for the government's case that abortion should be legalised on suicide grounds.

That expert evidence is now filtering through to the public. Meanwhile, voters have become energised and motivated in response to Fine Gael's proposal to legalise abortion in Ireland.

Within just three weeks, some 32,000 voters have signed a pledge never to vote for Fine Gael again if the party introduces abortion. More than a 1,000 people are continuing to sign every day - and these are votes that Fine Gael cannot afford to lose.

Enda Kenny should look to the man whose party has now overtaken him in the polls. Fianna Fáil leader, Micheál Martin, last week told thejournal.ie that his party 'had issues' with the inclusion of suicide as a ground for abortion.

Martin, unlike Kenny, has experience of being burned by misreading the Irish electorate on this issue. During the first referendum on the Lisbon treaty, abortion became a major concern for voters. The government at the time misread the signs and underestimated just how widespread those concerns were.

The country voted No to Lisbon. Research undertaken by Millward Brown showed that 66% of No voters were either somewhat or very concerned about the potential for the EU to interfere in Ireland's pro-life laws. The electorate did not want abortion legalised in Ireland.

Now a Fine Gael-led government is looking at a proposal to legalise abortion on suicide grounds. John Bruton, the former Fine Gael leader - and a former Taoiseach - has publicly opposed the proposal; a public relations nightmare for Enda Kenny at a time when the party is already sinking fast.

Bruton has sincerely held pro-life views, but perhaps he can also see that the numbers for Fine Gael are going to get worse if they continue on this course of self-destruction.

Enda Kenny needs to pull back from this kamikaze mission on abortion, or face the consequences within his own party.