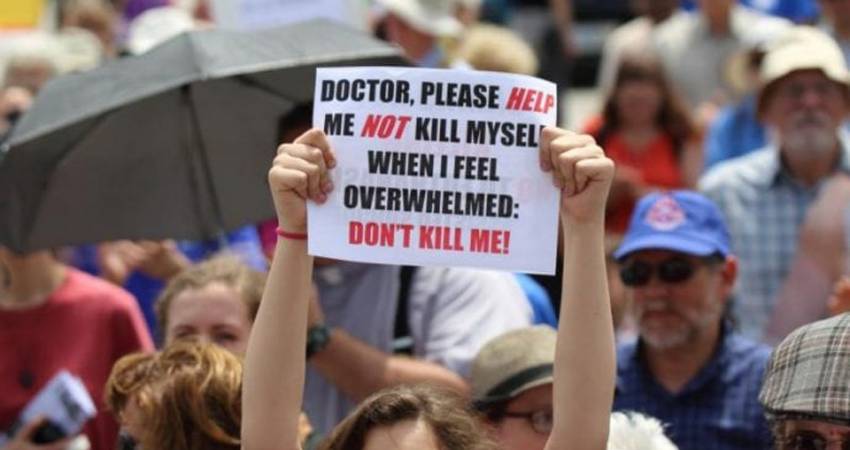 Ten Fine Gael TDs and four from Fianna Fáil joined liberal and left-wing TDs last night to ensure the Assisted Suicide bill passed its second stage in the Dáil by 81 votes to 71. The bill will now go to the Committee Stage for examination.

In Fianna Fáil Jim Lawless, Thomas Byrne, Paul McAuliffe and Health Minister, Stephen Donnelly, broke with the rest of the party to support the proposal to end the lives of people with a terminal illness by suicide if requested.

While Assisted Suicide is a contentious and difficult issue, and most medical experts in palliative care remain strongly opposed to the practice, just 70 minutes debate on the bill took place in the Dáil - with just 4 minutes given to those opposing the measure.

The Bill would allow doctors to help a person die by suicide once they have been diagnosed with a terminal illness. The person need not be at the end of life, or in pain and there is no requirement for any psychiatric assessment of the patient before a lethal injection or tablet is given.

Niamh Uí Bhriain of the Life Institute said that there had been no debate and no honesty in the push for assisted suicide so far.

"The media are using the same playbook as they did with abortion - ignoring the evidence and supressing the actual debate, focusing on emotive stories and side-stepping the ugly reality of endangering the sick, the elderly and the most vulnerable in our society. We pretended it was progressive to kill unborn babies, and now we want to pretend its progressive to 'assist' vulnerable people to die by suicide even though we know from the experience of other countries that they are made to feel a burden when assisted suicide is legalised," she said.

"56% of people who ended their lives by suicide in Washington State said they feared being a burden," she said. "There's a deficit of genuine love and compassion in the world that is making it a harder and more brutal place than poverty ever did. This bill is going to Committee and people need to make their opinions heard to the TDs who are supporting this measure."

Ms Uí Bhriain said that assisted suicide had become a cost-cutting measure in other countries, with insurers telling cancer patients that they would pay for assisted suicide but not for cancer treatment, while a terminally ill man in Canada who had requested home care was offered assisted suicide instead.

"The same people who let our sick and elderly die in nursing homes during Covid are now pushing to have their lives ended by suicide, it's appalling and deeply disturbing," she said. "Anyone who cares about their sick and vulnerable loved ones needs to see what's happening in other countries and take action to stop this bill."

Columnist and Iona Institute director, David Quinn, said the second state vote supporting the bill was "another moral disaster" and that the "opposition of palliative care doctors was totally ignored".

Peadar Tóibín said that the medical experts who managed pain and discomfort at the end of life were strongly oppsed to assisted suicide and wanted the public to understand that palliative care was the answer. However, he said, that was being ignored in the debate.

In a letter to TDs before the vote, Dr Feargal Twomey of the Irish Palliative Medicine Consultants Association said that "the citizens of Ireland in need of palliative care who we care and have cared for are not the people seeking this legislation. We urge you to consider that creating a law on the basis of the wishes of a minority, no matter how sincerely, emotively and stridently expressed, will expose a far greater number of people in vulnerable groups such as the elderly, the disabled, those with mental illness or those who may feel a burden to their families to a sense of duty to die, or worst to abuse.

"We know that many in our society don’t really know what dying is like, or how rare it is that severe pain cannot be controlled. We therefore feel that neither the public nor, with every due respect, our TDs can yet fully understand the impacts and unintended consequences that could flow from legislation in this area. We sincerely request that you vote against the Bill as currently presented and support the Government’s amendment to allow for in depth scrutiny and the hearing of testimony from all parties concerned," he wrote.

Reactions on social media decried the lack of debate on the issue, with Irish Catholic editor, Micheal Kelly, pointing out that TDs who opposed assisted suicide had just four minutes to debate in an already too-short 70 minute time frame.

While those living with terminal illnesses also spoke out.

As it happens I do have a terminal illness. I am stage 4 COPD and have already outlived my prognosis twice. I have less than 20% long capacity, fell constant pain from necrosis and have other difficulties too. How many old and sick will be persuaded to end their lives?
— Paddy Murray (@paddytmurray) October 7, 2020

The TDs who voted No and Yes to Assisted Suicide: