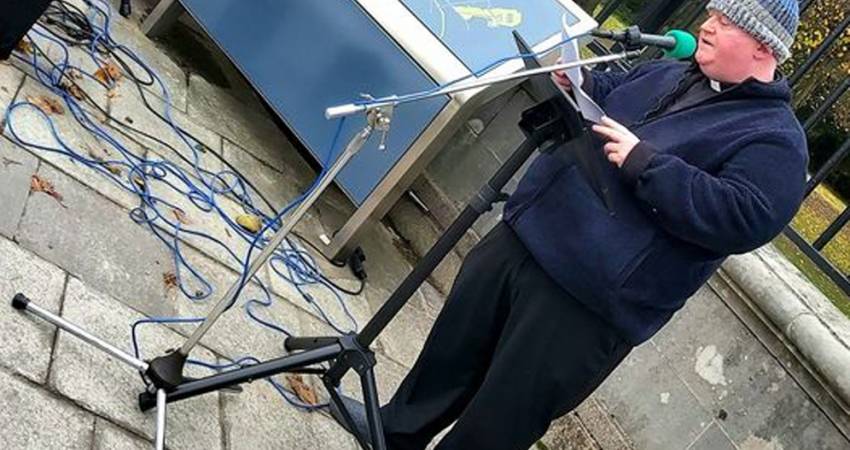 “Restore Personhood” is the appeal we make today as we mark this shameful 1st anniversary of the imposition of abortion on the six counties of the North of Ireland.

It is crucial to the evil propaganda of the pro choice abortion industry and its advocates and lobbyists, to deny that the unborn boy and girl is a person. They must, above all, deny the humanity of the child whom they demand the “right” to kill as a “choice”.

This is why they detest the banners and displays of the Pro Life groups which show the unborn child growing in his and her mother’s womb. I’m not even talking about images of children killed by abortion. I’m referring to the image of a growing child – an embryo – a foetus.

The terms ‘embryo’ and ‘foetus’ are other words for ‘child’ - in the same way as are ‘infant’, ‘toddler’ and ‘baby’. These are all descriptive terms for human persons at various stages of early life, young development and growth.

Thus the image of the growing child, in his and her mother’s womb, often provokes fury among those who attempt to portray abortion as acceptable behaviour for human beings.

Pro abortion politicians and other pro choice abortion activists will often take to social media and the airwaves, in pure rage, when they are confronted with these displays. Why?

Because, there is no escaping the truth that this is the image of a small person developing and growing. Deep down, it is the troubled consciences of these men and women that are greatly disturbed and, with their shrill catch-cries about so-called “reproductive rights”, so-called “health care” and “the right to choose”, they try to shout down what their own hearts and souls are trying to tell them.

The unborn child has personhood even when society denies it and refuses to acknowledge the child’s innate rights and humanity. What has happened, in both jurisdictions on this island, is a suppression of the truth of the personhood of the unborn.

Society in the 26 counties has voted to legalise infanticide and suppress the most fundamental right of every human being – the God-given and inalienable right to life.

Society in the six counties has had one of the most brutal abortion regimes in the world imposed on it by Westminster, with the connivance of political parties, without consultation with the electorate.

I hope our dear friends in the Pro Life cause who are from the Protestant and unionist and loyalist traditions, will understand if I speak from the perspective of those nationalists and republicans who are also faithful and believing Catholics.

We have been profoundly betrayed by the politics we have traditionally trusted and to which we have mostly, in the past, given allegiance. Sinn Fein are an avowedly pro choice abortion party. The pro choice abortion ideology is now also at the heart of the SDLP leadership. The SDLP can no longer be trusted and/or regarded as a pro life party.

The same is true of parties in the 26 counties for which faithful Catholics have voted in the past.

In early August, that great man John Hume died. May he rest in peace. At the heart of his mission in our society was his deep sense of justice and his convictions about the rights, worth and dignity of every human person.

At his Funeral Mass, in St Eugene’s Cathedral, Derry City, on August 5th, it was deeply distressing to witness politicians, who stridently campaigned for the evil of abortion in both jurisdictions of Ireland, presenting themselves for Holy Communion and being permitted to receive Holy Communion.

It was a scandal and a travesty that this was allowed to occur. It is an abuse of the Catholic Faith. As faithful Catholics, we must appeal to bishops to prevent such scandals from reoccurring.

To distribute Holy Communion, to those who are persisting in publicly manifest grave sin, damages and compromises the integrity of the Gospel of Life and of the Faith itself. It sends out a message about the 6,666 (and rising) unborn infants killed so far in the south and the 664 (and rising) killed in the north: that their innocent blood counts for nothing!

To publicly campaign for an evil as grave as abortion – to be unrepentant over having pursued the repeal of the 8th amendment – not to have repented before God for have colluded with Stella Creasy’s aggressive and determined drive to force abortion on the North – to have crowed that “the North is Next” – is irreconcilable with being a Christian and a Catholic.

To approach Holy Communion in this spiritual condition is a sacrilege and the Church’s teaching, based on Sacred Scripture – and reiterated by Pope Benedict and Pope Francis – is that Holy Communion should not be distributed to such persons.

We appeal to our bishops to show courageous pastoral leadership. It is ultimately for the good of such men and women not to distribute the Holy Eucharist to them, in the hope that they will reflect on their actions and reassess their views, in the light of the Faith to which they once, at some level, adhered – so that they might repent and be reconciled to God.

For our part, on this anniversary of shame and the betrayal of our unborn sisters and brothers, we will never cease to remind society of the truth of the personhood of the child in the womb and defend his and her rights. We will never desist from seeking to persuade society that the barbarism and sheer injustice of abortion is not worthy of human beings.

Abortion is profoundly anti human. There is no more insidious attack upon true human rights, upon the very foundations and concept of human worth and dignity, than the ideologies that seek to justify the destruction of the most vulnerable of all human beings.

Pro abortion choice advocates and activists regularly slander and seek to caricature those who stand against the evil of abortion as being pro life only up to birth. They need to do this, of course, once again, to quieten their troubled consciences and to be able to close their eyes to the plain truth – the grotesque reality of deliberately killing human beings in the womb.

Much of what is termed “woke” in these times is only a very selective “wokeness”. Supposedly “woke” eyes are deliberately closed tight shut to the plight of the unborn. The lie that is peddled, that we, who remind society of the personhood of the unborn child, do not care about children who are born, holds no water. It is a lie and a slander.

We are very much engaged in efforts, across the world and locally, to create a just and equitable society, where all are valued, cherished and welcomed. A child is a child, whether in the womb at three months trimester, or three months born, or three years old. The unborn and the born are not in competition. They are all human persons.

At present there is a most admirable campaign led by Manchester United footballer, Marcus Rashford, to provide free meals for schoolchildren during the half term break. He has said:

“These children matter. These children are the future of this country. They are not just another statistic. And for as long as they don’t have a voice, they will have mine”. These are stellar words. We who are pro life echo those words.

But we direct the gaze of society also to the unborn. These children ALSO MATTER! These unborn children ALSO are the future! Each unborn child killed by abortion is also a child who had a future and a destiny. They did not come into being to be counted as an abortion “statistic”. And for as long as they don’t have a voice, they will have ours!