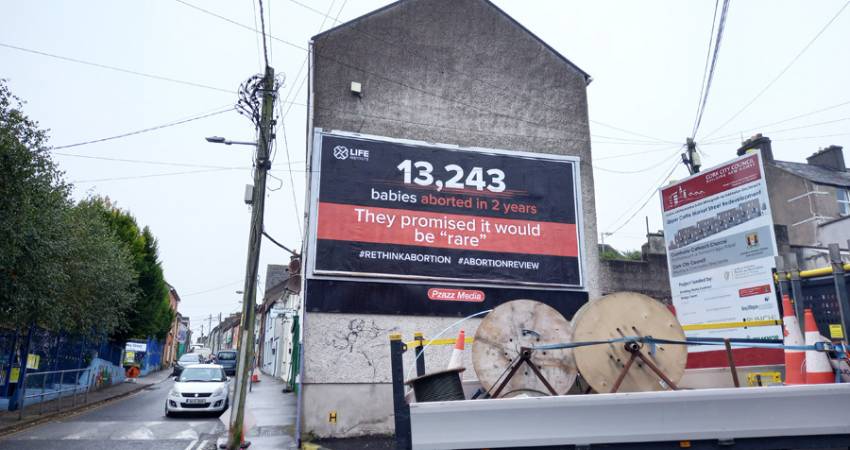 PR: Press event for pro-life billboards at Dáil tomorrow as national campaign heats up ahead of abortion review

The Life Institute will hold a press event at Dáil Éireann tomorrow, Thursday 14th October, at 11 am to present the national pro-life billboard campaign which is central to a #RethinkAbortion initiative gathering pace ahead of the 3-year abortion review promised by Minister Stephen Donnelly.

The pro-life billboards, which are on display nationwide, draw attention to the dramatic rise in the number of abortions taking place in Ireland since the 2018 legislation took effect. Some 30 billboards are currently booked by Life Institute, with further bookings planned. See photos in Dropbox of billboards.

"We're bringing public attention to the disturbing rise in the number of abortions - 13,243 in just two years, despite assurances from Leo Varadkar that it would be 'rare'", Megan Ní Scealláin of the Life Institute said. "The upcoming review must examine that increase and rethink the abortion regime established since the 8th was repealed, since so many of the promises of that referendum have been broken."

The billboards state that 13,243 abortions took place in just two years, though voters were told it would be "rare" - and point out that the lives lost come to a greater number than the population of some mid-sized Irish towns, such as Arklow and Shannon - or whole areas in Dublin, such as Santry or Crumlin. The abortion figures were released by the Department of Health in July 2019 and 2020.

"Making abortion legal has certainly made it much more frequent," said Ms Ní Scealláin. "Despite the lockdown in 2020, another 6,577 abortions took place, adding up to a grim total of 13,243 in just two years. Yet the government has given no indication that they would like to act to reduce this number or offer better options to women. Instead, we have abortion campaigners demanding changes which would further increase the number of babies aborted, such as scrapping the three-day reflection period."

Life Institute said that the billboards, social media messaging and leaflet drops were central to a campaign urging both TDs and the public to examine the surge in abortion and the other negative outcomes that have accompanied the new regime -   many of which belied the promises made during the referendum by those urging a Yes vote.

Pro-life groups say the abortion review should not be a "whitewash designed to ignore the reality of abortion which would be disturbing to many - including many Yes voters."

Ms Ní Scealláín said that "there are aspects of the abortion regime which even many Yes voters would now consider require serious reconsideration and review."

"The Review process should also examine why a study published in the British Journal of Obstetrics and Gynaecology in October 2020 by researchers from UCC said that doctors in Ireland were left 'begging for help' if babies survived late-term abortions. Again, voters were promised no late=termn abortions would take place," she said.

"The same study confirmed that feticide - administering a lethal injection to the unborn baby's heart - was being carried out in Ireland, despite assertions in the referendum that late-term abortions would be illegal. That, too, must be investigated, as should the horrifying revelations that doctors may be left "begging for help" if babies survive late-term abortions."

The Life Institute said that any changes which would further increase the number of abortions should be strongly resisted. "No reasonable person wants more abortions to take place," said Ms Ní Scealláin. "Removing the three-day waiting period would be a disservice to women, and a breach of promise to voters. Figures released to Carol Nolan TD, showing a substantial difference between initial consultations for termination of pregnancy and the number of abortions that took place, suggested that some 870 women changed their mind after the initial consulation during the 3 day waiting period mandated in the legislation."