Recognized by physicians from at least the tenth century, an Ectopic Pregnancy is when a fertilized ovum develops and implants outside the womb, either in a Fallopian tube or, more rarely, in the abdominal cavity. The developing ovum outgrows its blood supply and dies, causing severe bleeding. This condition is rare. Less than 2% of pregnant women have an ectopic pregnancy.

If you are experiencing severe pain in your abdomen (usually on one side), heavy vaginal bleeding and you feel faint (particularly if you have already had a positive pregnancy test), go to a hospital at once. If it is discovered to be an ectopic pregnancy, the situation may be life threatening and will need prompt surgery. In serious cases, the affected fallopian tube may need to be removed. Sometimes an early ectopic pregnancy can "miscarry" itself, without your knowledge.Common symptoms are lower abdominal pain, often on one side at the beginning, light bleeding, nausea and vomiting, dizziness or weakness, and/or pain in the shoulder or rectum. If the fallopian tube ruptures, the pain and/or internal bleeding can be severe, enough to cause fainting.

There has not been a single death from an ectopic pregnancy in Ireland over the last 20 years, where abortion is illegal.

In Britain, however, where abortion is legal, 4 - 6 women die from ectopic pregnancies each year.

Treatment for Ectopic Pregnancy is NOT ABORTION

An ectopic pregnancy is an abnormal pregnancy whereby the embryo implants anywhere in the woman’s body outside the uterine cavity which is the normal place for a baby to develop. The vast majority of ectopic pregnancies implant in the fallopian tube, the other ectopics are ovarian, cervical and intra-abdominal.

Whilst there have been cases of non-tubal pregnancies surviving to viability and resulting in healthy babies being born, tubal pregnancies carry a high risk of rupture and hemorrhage which can be a serious surgical emergency for a woman. Nowadays, death from a ruptured ectopic pregnancy is rare as they are diagnosed early and women have access to surgical and medical treatment.

How is it treated?

There are a few options for treating an ectopic pregnancy and these can be divided into medical and surgical therapies. Unfortunately, in Ireland at present, there does not yet exist a procedure whereby a surgeon can remove the embryo and re-implant it into the mother’s uterus to allow it to grow normally. It’s important to remember that a tubal pregnancy left untreated carries with it a high risk of mortality from bleeding which will result in death of both mother and baby.

With a salpingotomy the embryo is removed through an incision made in the fallopian tube, and the defect in the tube closed with sutures.

Abortion is not needed to treat an ectopic pregnancy and the current treatments that are available for such pregnancies are not considered abortion as far as the medical community is concerned. There are a few things to consider in this regard:

It is important to remember that an ectopic pregnancy is not a normal healthy pregnancy, it is a diseased condition that carries serious risk for the mother and it is that pathological process that needs to be treated.

The treatment for this condition does not meet the definition of abortion which is the purposeful destruction of the unborn in the termination of pregnancy.

The intent of the doctor needs to be considered in every intervention; in the treatment of an ectopic pregnancy his or her intent is to treat an abnormal condition and avert serious risk to the mother. In an abortion the intent is to end the life of a living baby. Intent is something that carries serious weight, in medicine and in criminal law.

In Ireland, a country where there is ban on abortion yet permits all necessary care to a pregnant woman, treatments for ectopic pregnancies are carried out without prosecution or judgement because these are not considered to be abortion.

Not a single woman has needed to travel to Britain for an abortion to treat her ectopic pregnancy – proof that these interventions are not abortions and can be carried out in Ireland under our current laws and Medical Council Guidelines.

Where is the evidence?

Many obstetricians have testified to the fact that treatment of ectopic pregnancies does not involve abortion:

Former Chairperson of the Institute of Obstetricians and Gynaecologists, Professor John Bonnar has testified that the treatment for ectopic pregnancy “is not abortion as far as the medical professional is concerned” but rather “essential treatment to preserve the life of the mother”

He went on to say that; “A ban on abortion does not involve treatment of ectopic pregnancies; you would have to be a misguided doctor to think that it did”.

In his oral submission to the Oireachtas Dr James Clinch explained what actually happens in Irish medical practice: “You are working in a hospital, you find somebody with a tube that’s swollen, bursting, about to rupture and maybe do something terrible. You’re a registrar or senior registrar. You treat that woman the best way you can. Your intention in treating that woman and her tube is not to kill a baby. That’s why the word intention was put in. So that’s how I would look at that”

An article discussing the significance of intent as applied to medical therapies and abortion in situations such as ectopic pregnancies was featured in the Journal Health Care Ethics. This stated that “although the action that corrects the pathology, whether surgical or medical, is the same action that brings about the death of the embryo, that death is not the direct effect that is intended”. 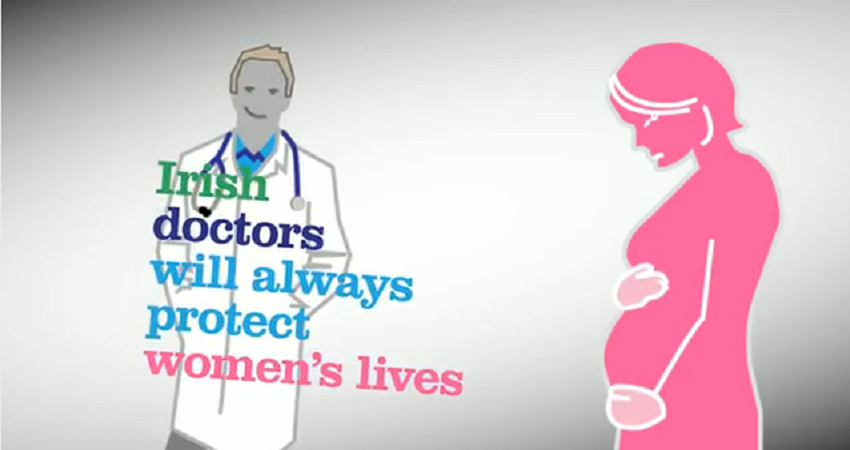 Babies who have survived

The treatment of ectopics gets better and better all the time with advances in medicine making it possible now to transfer the pregnancy from the tube into the uterus. In reality, there have been many reports of successful ectopic pregnancies.  Two obstetricians in New York, Dr.’s Hellman and Simon, published details on 316 ectopic pregnancies which resulted in live births between 1809 and 1935. Only half of these children survived their first week of life, but these births occurred long before the development of the first neonatal intensive care unit.  With modern technology, it is likely that many more would have survived.)

But consider this case that was documented in 1917, nearly 100 years ago. In the Harvard Medical Library in Volume XXIV of the medical journal Surgery, Gynecology and Obstetrics. In the article Transplantations of Ectopic Pregnancy from Fallopian Tube to Cavity of the Uterus, Dr. C. J. Wallace describes a successful transplant of such an out-of-place baby into his mom's womb:

In Duluth, Minnesota during an operation on a 27-year-old woman Dr. Wallace:

"found an ectopic gestation in the left tube," which was "enlarged to the size of a walnut... Knowing their anxiety for raising a child, I decided to try, at least, the only thing at hand -- to transplant the ectopic pregnancy. ... I carefully opened the tube and dissected the pregnancy out intact, being careful not to injure the sac in any way by keeping wide away and including part of the tube-wall. It came out very easily and was in size about equal to a large olive. It was at once placed within the cavity of the opened uterus... The tube was closed in like manner and left in place. The patient was watched carefully... for two weeks with no symptoms whatever. ... The pregnancy went on normally to full term and resulted in the natural birth of a fine boy, fully developed and without a scar, May 2, 1916."

In an ectopic pregnancy the woman's fallopian tube ruptures, usually leading to loss of the pregnancy and massive internal bleeding which can prove fatal for the mother. But in Ronan's case, when the tube ruptured the embryo attached itself to the mother's uterus and created its own "womb", with its own blood supply, in the mother's abdominal cavity.

Scans at the time showed only a normal twin pregnancy and it was not until much later doctors discovered the truth. Consultant obstetrician Dr Davor Jurkovic, who delivered Ronan, along with his two sisters, said it was a "miracle" that the triplets and the mother had survived.

And Mrs Ingram's bravery had been central to the success of the birth. "Jane was absolutely incredible. The attitude of the patient in situations like this is crucial and her attitude was always positive," he said.

A mother in Missouri and her baby daughter are both healthy after a rare and undiscovered ectopic pregnancy. Jonna Snodgrass, 36, delivered Katelyn Snodgrass at Heartland Regional Medical Center’s New Beginnings Unit in August 2013

Doctors discovered the baby girl was ectopic and didn’t implant in the uterus, instead implanting in one of her mother's ovaries. See this report from KQTV on Heartland Hospital's Maternity Unit.

Jayne Jones, then 27 weeks pregnant, learned that her baby was growing not in her womb but in her abdomen, on the omentum – the layers of fat that cover the bowel. It is the rarest form of ectopic pregnancy, found in one in 50,000 of all pregnancies, and one of the riskiest.

In 2008, an Australian baby has been dubbed a miracle after she survived -- in what is believed to be a world first -- a full-term ovarian pregnancy. Durga Thangarajah defied the odds and was born at Darwin Private Hospital after a two-hour delicate operation saw doctors carefully cut her from her mother Meera's right ovary.