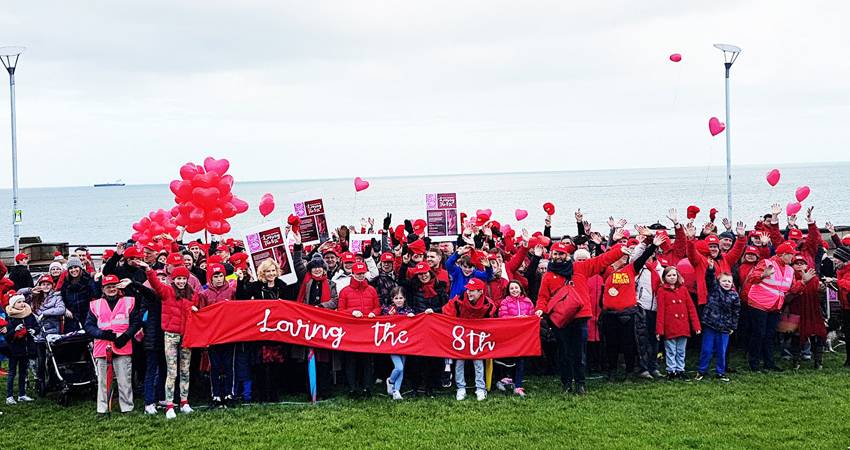 Hundreds at Loving the 8th event in Dún Laoghaire today

Loving the 8th event in Dún Laoghaire today, with supporters of all ages sending a powerful, positive message about the life-protecting constitutional provision, according to organisers.

People of all ages, including many families and young women, carried heart-shaped balloons and posters, and wore Loving the 8th hats to say that they believed the amendment should be retained.

The event was organised by Dún Laoghaire Life Canvass and Cherish All the Children Equally as part of a growing and energised campaign to Save the 8th.

"We were so delighted to see such a great crowd come out for this event today, and it's really indicative of of how people are becoming energised at a local level to save the 8th amendment ahead of the referendum," said spokeswoman Mairéad Hughes.

"It was such a positive event, pointing out that the pro-life 8th amendment protects both mother and baby, and is a provision has saved so many lives. We hear so many criticisms of the 8th in the media, but as a mother whose baby was born very early because I had serious complications, I know the 8th protected us both. I know the value of the 8th."

Ms Hughes said the Loving the 8th theme would continue through the next week to include Valentine's Day.

"I believe our laws currently show love to both mother and child, and we want people to understand that the 8th is life-saving, and that is why we're Loving the 8th," she said.

"The 8th encourages us to support women in crisis and to love both them and their baby, and surely that's the most progressive and compassionate way forward for Ireland," said Ms Hughes.