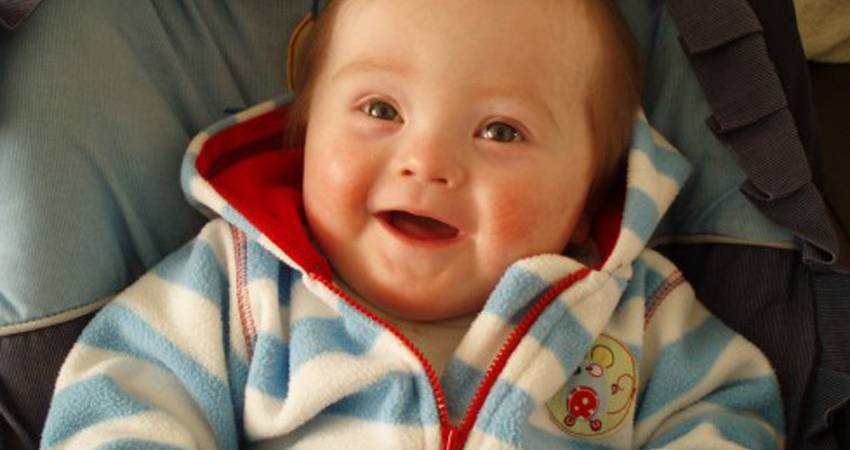 He colours my life

I am the mother of a beautiful boy with Down’s Syndrome who was born three weeks early (in The Shelbourne Hotel, as I was told 1 hour 20 mins previously by the National Maternity Hospital that I was not in labour, but that is another story!)

My reason for writing this is because society now seems to dictate how you should feel once you realise that your baby has Down’s Syndrome.

I knew as soon as Michael was born that he was, shall we say, ‘different’, and with my hand on my heart, it did not bother me in the slightest. As long as he was breathing and crying at birth I was just ecstatic to have given birth to another baby.

When we eventually returned to hospital the nurses went quiet and called in a paediatrician, whose first words were ‘his ears are set low’ and then came ‘he has features of Down’s syndrome’. It took however about 4-5 days before they would confirm this officially, as they had to have the condition confirmed by blood tests, which I completely understand, but I knew myself. I was given a room on my own, whether or not this was because it was just available or whether they thought I needed the space and time on my own to ‘come to terms’ with the fact that my child had Down’s Syndrome. I was told that ‘shock can take some time to settle in’ and I found this hard to hear as I could not imagine feeling anything other than total and utter love for my newborn baby. As it happened I was really glad to have that room as it was more beautiful to spend the time alone with my angel. It made the trauma of the birth experience more bearable just being able to talk to my son alone.

Throughout my time there I had various people coming in to ‘check’ on us and numerous times I told them that I couldn’t care if my child had 8 heads, I couldn’t love him anymore. I was getting a bit fed up telling people that the fact that my son had Down’s Syndrome did not bother me at all. I kept watching their expressions and it was as if they were waiting for me to crumble and cry or breakdown.

Too many people write about how the parents feel, my question is how does the baby feel? He or she, like every other child born in this world deserves and needs to be looked at, kissed, hugged, smiled at and loved from the second they have made their hard journey into the world.

What gets my blood boiling is one of the first articles I picked up to read about Down’s Syndrome (and one I very quickly put down again), and it is also echoed by Nurse Angela O’Riordan, Ireland’s first Down’s Syndrome liaison nurse (recently writing in the Irish Times) who said “you need to give yourself time to grieve”, that ”your emotions are similar to those of the loss ofthe baby they were expecting”. Having had three miscarriages, I know what the loss of a child feels like and I know that thousands of other women have felt the loss of a child either in the womb or in infancy, and I find it these comments unacceptable. Your child is not dead, it is alive and kicking and although may have underlying health issues, it has the same basic need that every child has at birth; to have its dignity as a human being recognised, respected and to be unconditionally loved.

What I also noticed was, almost instantly after the birth, the second or third question people asked was: “”Oh, did you know beforehand?”. What difference would it have made to me…. none! I just so happen to have an extremely strong faith and ‘finding out’ anything about a baby in the womb is just something I would never even consider. To me it is morally wrong. To me each child in the womb deserves to live their nine months in comfort, safety and privacy and to trust that their mum is not going to do anything to endanger that whatsoever. Thankfully, all my family hold the exact-same opinion as myself and I have a good circle of friends who, like me, just see a beautiful two-year old boy!

I was told by a lady from St. Michael’s House, that I was in the 1-5% of people that feel this way, I found (and still find) this incredible! She said other people get to this stage later, but I find it sad because what about all the days, weeks, sometimes months that pass in between, can you ever make up for those times?

To quote from an article about mothers from The Messenger of St Anthony (May 2011/No.5 Nearl 13)

“One thing is sure – good mothers love their children. This love comes in an infinite variety offorms. It expresses itself in both steadfast commitment and trusting relinquishment – all for the good ofthe child. In so doing, this love mirrors the face of God’s motherly love to those children and to the world around them. … ”

Yes, it takes time, patience and commitment to help a child with Down’s Syndrome but the rewards are so worth it. I can honestly say that I find my son’s character the most beautiful of all my children. He is the most placid, good natured little boy and so comfortable in his own skin. He wakes up with an instant smile that just warms my heart immeasurably and goes to bed with the same beautiful smile. I am not fooling myself, I know that as he gets older, the daily life activities may get more difficult and challenging or his health, God forbid, may deteriorate but I will be there for him and help him through everything life has in store for him.

All I know, is that if we lived in a world where you ‘picked out’ your child beforehand, knowing what I know now, I would pick Michael every single time! My life would be an awful lot greyer without him as be colours every aspect ofmy life and in the life of everyone who knows him and I thank God for him every day!