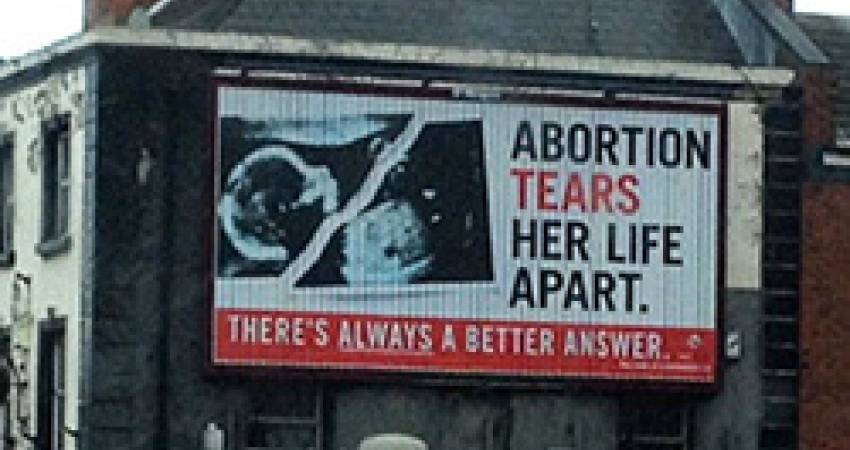 Abortion is not the answer - and neither is censorship

Irish abortion campaigners are currently in a tizzy about a new pro-life awareness campaign produced by Youth Defence and the Life Institute. They’re orchestrating complaints to the Advertising Standards Authority and issuing press statements describing pro-life billboards as ‘offensive’.

So far, so predictable; though it’s always ironic to see just how intolerant of free speech these self-styled liberals and left-wing activists are.

Abortion advocates don’t like the campaign because it does something that is usually avoided in most public discussions on this issue : it brings the reality of abortion into focus.

The campaign simply says that abortion tears lives apart, and uses torn photographs for emphasis. The adverts were inspired by a woman who said that after her abortion, she felt as if her life, as well as that of her unborn child, was torn apart.

There are many other women who feel the same. One woman wrote on our website this week that she had an abortion last year, and that she has deeply regretted it ever since. She said: “I made a mistake of turning to the wrong people for advice in a time of need. Although it pains me to see these posters (I passed by nearly 4 on Saturday) I am glad they are there and hope they may help even one person to re-consider and not go through with it.”

We’ve had scores of similar emails and messages since the Better Answer campaign began. We’ve heard too from one father who said he was left feeling suicidal by his experience with abortion. These messages are often both brave and heartbreaking, but the trauma they detail is usually dismissed by abortion campaigners. Instead, they claim that our awareness campaign is offensive and should be banned. Some of them have resorted to vandalism and threats in a vain attempt to censor the pro-life message.

These abortion campaigners say they want Ireland to be forced to legalise a ‘woman’s right to choose’. Their much-vaunted concern for women has been less than evident recently, however.

They were silent when news broke last year of an Irish woman who almost died following a botched abortion in Britain. They said nothing when an official investigation into Britain’s abortion clinics revealed that illegal activities, such as failing to counsel women and pre-signing consent forms, was widespread. They refuse to acknowledge the scientific evidence that shows women are negatively effected by abortion. And their silence in the face of the monstrous forced abortion policy that is overseen by the Chinese authorities is actually shocking.

Clearly, supporting women takes second place to promoting abortion. And the truth is, of course, that our campaign is not at all offensive. Crucially, our experience is that the public is supportive of the message, which was designed, produced and organised by volunteers.

We contend that there is always a better answer than abortion – and we should work to terminate the crisis and not the child.

In fact, Ireland’s experience has shown that our pro-life ethos has best served both our mothers and babies. The United Nations rates us as the safest place in the world for a mother to have a baby, and our top experts say that they can care for mother and baby without recourse to abortion.

Recently, a collection of research studies published in a special edition of The Lancet medical journal found that women who developed cancer when pregnant did not need to abort their baby, delay their own treatment, or give birth prematurely. Commenting on the findings, researchers at the French Institute Gustave Roussy wrote that recommendations to abort would be an ‘unacceptable error’.

So we know that abortion is not medically necessary: and we also know that Irish abortion rates have now fallen by more than 30% because of increased information and better support for women in crisis.

It would be entirely contraindicative then for Ireland to resort to the medieval solution of abortion. The government is currently awaiting the recommendations of an ‘expert committee’ which will look at the ruling of the European Court of Human Rights in the ABC case. This campaign reminds Fine Gael of the public committment they made during Election 2011 to uphold Ireland’s ban on abortion.

It’s worth noting that the Labour Party’s preferred alternative is to introduce the British model of abortion provision: which has led to abortion on demand, provided through all 9 months of pregnancy if the baby has a disability, and leading to the abortion of more than 90% of unborn children with Down Syndrome. This is not a humane response to crisis pregnancy.

There’s always a better answer than abortion. That’s the message of this new Irish campaign. It’s a message that will not be censored.