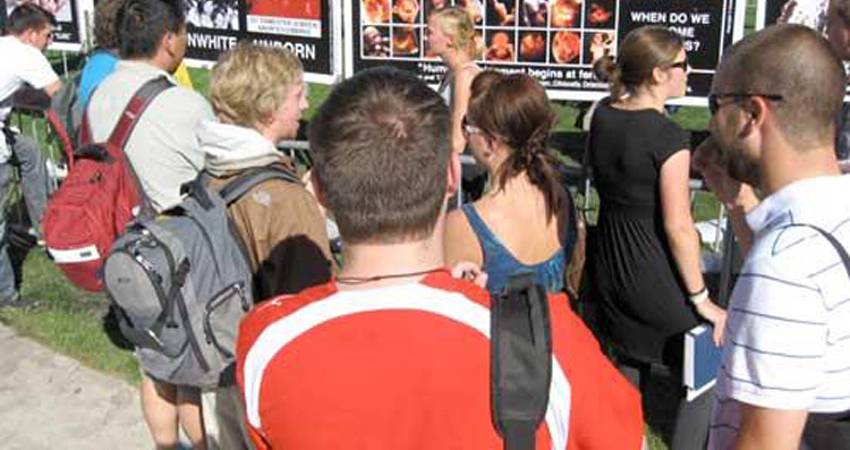 This brief conversation I had with a fellow pro-lifer and friend of mine made me stop and think. What was it that I was scared of? A quick review of my thoughts led me to an important realization. I was scared of how I would feel. I was concerned with my thoughts, my feelings, my emotions. I also realized something else: I had it all wrong.

Doing pro-life work isn’t about me. It’s about the precious pre-born. It’s about the 266 babies that are being decapitated, dismembered and disembowelled everyday in Canada. It’s not about how I feel; it’s about speaking up for those who were never able to tell us how they felt. Giving a voice to the silent screams of children who were ripped limb from limb.

This fall, I was just getting back into activism, and I was scared to start doing it again. It had been a few months, and I was rusty in my dialoguing skills. What was more, this time we were focusing on a middle school, something I’d never done before. So, I volunteered to go on the camera. While out there, I noticed a young girl just staring at the pictures. She seemed hesitant to talk to anyone, but just sat on the grass and stared at the images. Towards the end of their lunch break, she went over and talked to one of the other volunteers. Later, I commented on how sad she looked. The other volunteer told me that this girl came over and said: “My mom almost aborted me.” She was then told: “I’m so glad she didn’t.” Her response then broke my heart: “I wish she would have.”

At that point, I wish I hadn’t been so scared. I wish I would have been able to tell her how much value her life had. How special she was, and how important she was to so many people. Because of my fears, I wasn’t there for someone when they needed it most. Fortunately, my fellow volunteer was able to tell her in those few minutes of conversation, that her life had value and she was special. I realized that I needed to look past how I felt, and focus on each person I was talking to. Hurting fathers and mothers facing unplanned pregnancies, afraid of the future, and that young girl who was never told how special she was made me realize that day, how much I was needed to show support for each one in their personal pain and struggle. Our message is important–but so is every person we encounter in our activism.

I can tell you right now that no one I know enjoys doing this type of pro-life work. No one enjoys standing on street corners with signs filled with bloodied corpses, corpses of a generation that we will never see and know. It’s not ‘feel-good’ work: it can be heartbreaking, difficult and rewarding, all at the same time. However, and more importantly, we know that this message needs to be spread.

It’s simple, really. You have the truth. Human life begins at fertilization (science and embryology proves this), humans deserve human rights, so therefore all humans, including the pre-born, deserve human rights, and the most fundamental of these is the right to life. Everything right and true in life is a building block in a great fortress; rather than hiding in the fortress to protect ourselves, we can use our fortress to protect others as well. The evidence supporting the right to life from conception to natural death is all building blocks in the fortress of truth – and that fortress is strong enough to withstand scrutiny and debate.

Yes, you’ll be ridiculed and called names. You’ll become “that” pro-lifer. But you know what? That’s not a bad thing. You’ll be part of a movement that will touch your life in a way you never deemed possible. You will have conversations with 12 year old students who couldn’t imagine someone killing a precious baby. You’ll have heartbreaking conversations with post-abortive mothers who had no idea what they were doing. You’ll have frustrating conversations with people who don’t think that killing anyone, in or out of the womb, is wrong. And you’ll have a few beautiful conversations, where you learn that this difficult work you’re doing is saving lives. Because you were out there, in spite of your fears, lives were saved. And that makes being “that” pro-lifer so worth it.

But don’t be like me. Don’t let fear hold you back. Think of the tiny, developing humans that are scheduled to be “taken care of” today, tomorrow, and next week. Think of whose brothers and sisters those might be. Think of the friends your children might never know, the nieces and nephews you might never meet, the grandkids you’ll never get to rock and cuddle. Be courageous, not for you, but for them.

As you and I become “that” pro-lifer, we become “that” haushalt harboring Jews, “that” Northern farm providing a brief but important respite for fugitive ex-slaves, “that” Calgarian who opened their door to a stranger post-flood. It is often in small, simple acts like opening our homes and lives to a few individuals that whole tides and societies are impacted, if we like matchsticks, stand together as one.

Out of love for the pre-born, face those fears and be a voice. Whether it is in school, at home, at work, or on the street, stand together with your fellow pro-lifers and be that voice. Speak out for the pre-born. Come at it with all the love in your heart, and be that voice for the voiceless. For the vulnerable children that have no other voice, that we will never get to know, speak up. You might still be afraid; speak up nonetheless. For, in the words of Martin Luther King Jr., “Our lives begin to end the day we become silent about things that matter.”