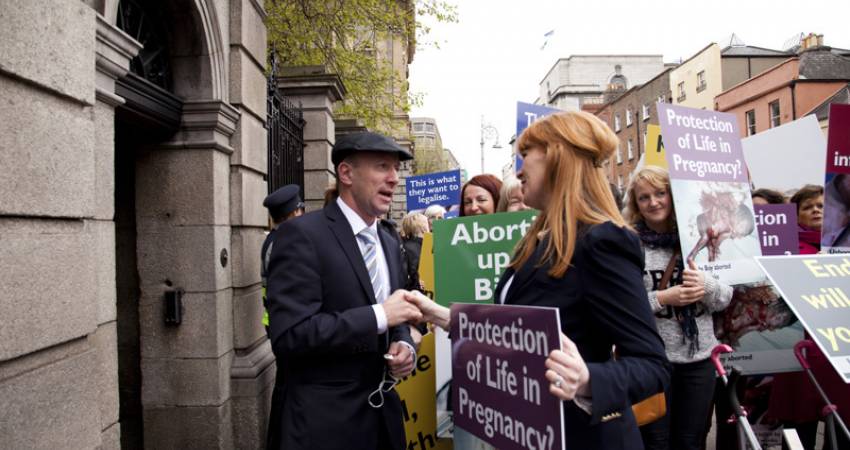 Kill the bill. Not the child

A Bill has been published by the government (June 13 2013) which would allow abortions to take place in Ireland for the first time. It’s name – Protection of Life during Pregnancy Bill – is a misnomer, since this Bill is primarily about legalising the deliberate killing of unborn children. There are 7 Key things you must know about this Abortion Bill.

1. It allows abortion until birth on suicide grounds

This has been confirmed by Minister Alex White, who said there would be “no time limits” in the Bill, and by leading legal experts who testified before the Oireachtas Committee hearings, including Law Lecturer Dr Maria Cahill of UCC, Professor William Binchy of Trinity College and Barrister Paul Brady. Even legal experts who supported the abortion Bill agreed that no term limits were included in the legislation.

The death of the baby will be the aim of the procedure – and under Head 4 of the Bill the threat of suicide need not be inevitable nor immediate.

Supporters of the Bill, such as Dr Rhona O’Mahoney, have denied that late-term abortions will be carried out, and argue that doctors would be required to protect the life of the baby after viability.

But there are two key issues here:
A. Where a mother says her pregnancy is causing her to be suicidal, while her child lives, the threat of suicide remains. The death of the unborn child – not the ending of the pregnancy – will then be the aim of the procedure under this Bill.

This is consistent with the Supreme Court ruling in the X case and, in particular, with Justice Finlay’s ruling that suicidality is a basis for the termination of the life of the unborn child.

Of course, the evidence of all the medical experts is that abortion is not a treatment for suicidality. The government needs to listen to the evidence, and overturn X, not legalise abortion.

B. In any case, viability arises at 24 weeks. Aborting a baby at 23 weeks is a gruesome and horrendous procedure, usually involving a lethal injection to the heart or dismemberment of a child who has been fully formed for several months.

We have seen from the experience of other jurisdictions that legalising abortion on suicide grounds or mental health grounds has been widely abused: in California, despite very restrictive legislation, more than 61,000 abortions were carried out on mental health grounds in one year alone.  In Britain, supposedly restrictive legislation has now led to a horrifying 190,000+ abortions every year, with 36% of those being repeat abortions.

2. It can force doctors to deliver healthy babies prematurely – even where a mother is physically healthy

In order to distract from the horror of late term abortion, Health Minister James Reilly is suggesting that, after 6 months gestation, the unborn baby could be delivered prematurely and kept alive.

Some of those problems include: brain damage, cerebral palsy, blindness, deafness, developmental problems – and even death.

All decent doctors would be appalled at this prospect – and many leading doctors have already expressed their deep concern at this proposal.

The Master of Dublin’s busiest Maternity hospital, Dr Sam Coulter Smith, told the recent Oireachtas Committee hearings that there are ‘major ethical and moral dilemmas’ arising for Obstetricians from the draft abortion Bill.

He also warned that it was his view, and that of his colleagues, that a possible ‘surge’ in the number of abortions would arise if the proposal became law.

Dr Coulter Smith said that there was no evidence that abortion was a treatment for suicidal ideation or intent, and that obstetricians were required to provide and practice evidence-based medicine.

He said that “our psychiatric colleagues tell us that there is currently no available evidence to show that termination of pregnancy is a treatment for suicidal ideation or intent and, as obstetricians, we are required to provide and practice evidence-based treatment”.

The legislation, therefore, created an ethical dilemma for any obstetrician who is requested to perform a termination of pregnancy for the treatment of someone with either suicidal ideation or intent, he argued.

Dr Coulter Smith said that the fact that there is no gestational limit in the legislation relating to suicidality was a “a major ethical issue for obstetricians” and a source of serious concern.

Fellow  Obstetrician, Dr John Monaghan, of Portiuncula Hospital, said he was extremely unhappy with the idea of Obstetricians becoming “mindless terminators for psychiatric reasons” and that the psychiatric or suicide risk clause has been brought in other jurisdictions and has been widely abused.

4. Psychiatrists have rejected the Bill, which could help to “normalise suicide” according to Ireland’s leading expert on suicide

Psychiatric experts have rejected the Bill as being fatally flawed – and more than 120 psychiatrists have now opposed legalising abortion on suicide grounds.

Ireland’s top expert on suicide and its causes, psychiatrist Professor Kevin Malone, said that the proposed abortion legislation could accelerate suicide rates in younger men because it would help to ‘normalise’ suicide.

“Contrary to the notion of it saving the lives of an extremely small number of females, it may be placing a greater number of young male lives at risk,” he said.

He argued that abortion was not an evidenced based treatment for mental illness and asked “as a clinician, I wonder how then it can overnight become a recommended psychiatric treatment in Ireland.”

Top perinatal psychiatrist, Dr John Sheehan, said that patients who were suicidal needed professional help, not an urgent termination of pregnancy. The proposal would make “psychiatrists the gatekeepers to abortion”, he said, adding that since psychiatrists were unable to predict the future, the Bill would lead to multiple “false positives”. He warned that late term abortion could have a very negative  effect on the woman’s mental health, and that abortion could increase the risk of mental health problems amongst women.

5. It allows for the ‘ending’ of unborn children’s lives – and provides no voice for the baby

The Bill states repeatedly that it “shall not be an offence to carry out a medical procedure in the course of which, or as a result of which, unborn human life is ended”.

The distinction between an unintended consequence and a direct action seems to be blurred in the Bill.

Currently, doctors in Ireland can always deliver an unborn baby early if a mother’s life is in physical danger. But this Bill allows for the life of the baby to be ‘ended’ – and this action shall be required of doctors for the first time in Ireland where a woman says she is suicidal.

The ‘right’ to an abortion will be decided by a panel of two psychiatrists in consultation with an obstetrician. Head 8 of the Bill provides that an appeal of a panel’s decision can take place if a woman is refused an abortion. There is no right to appeal given on behalf of the unborn child.

6. It radically changes Irish law and medical practice – and is not required by the European Court

Enda Kenny has protested that he is not seeking to change Irish law on abortion – but an Taoiseach knows full well that this Bill aims to allow the direct killing of unborn babies for the first time in Ireland.

Obstetrician Dr John Monaghan told the Oireachtas Committee hearings that the Bill would bring about “an enormous change in obstetric practice” where “an obstetrician is being asked to intervene in a physically healthy pregnancy”.

Dr Sam Coulter Smith warned that it may lead to a surge in abortions, and bring an extra burden on over-stretched Irish hospitals.

Barrister Paul Brady pointed out that “it is clear that [the suicide clause] marks a change in the law. It is not accurate to say otherwise. It creates, for the first time, a statutory basis in Irish law for what may be a direct and intentional termination of an unborn child’s life.”

Barrister Suniva McDonagh also told the hearings that the Bill “represents a significant change in medical practice” and that for the first time in statute law “it is being provided that the actual treatment is the termination of the pregnancy. The proposed treatment is, in fact, abortion.”

The government is also insisting that Ireland is obliged to legalise abortion because of the European Court ruling in the ABC case. But that’s simply untrue. The ruling simply asks Ireland to provide clarity in regard to available medical treatments – and doesn’t mention suicide at all.

7. It seeks to legislate for the X case – but ignores developments in law since 1992

The Bill seeks to legislate for the X case and to therefore allow for abortion on suicide grounds.

However, in the X case, the claim that suicidality was a ground for abortion was a conceded point and was never argued, and therefore not decided, according to barrister, Paul Brady. That means that the X case ruling does not set a precedent according to constitutional law.

Justice Catherine McGuinness, who supports the abortion bill, also told the Oireachtas Committee hearings that the government was free not to legislate for X.

Legal expert, Dr Maria Cahill of UCC,  also pointed out that the Bill ignores the fact that the X-case test has been developed in subsequent court cases.

In one case, Cosma v. Minister for Justice (2006) a woman sought that her deportation order be quashed on the grounds that if she were to be deported, she would commit suicide. The Minister refused to allow her to stay even after he had seen two psychiatric reports that detailed the strong possibility that she would commit suicide, and the court upheld the Minister’s decision. In this case the High Court adopted and developed the test from the X case of real substantial risk to life.

The High Court held that:

Evidence of a treatment plan for a presenting psychiatric condition was required.

Serious consideration had to be given to other means to end the risk to life.
Public policy had to take into account that claims of suicidality could lead to an opening of what the Minister described as a “Pandora’s box” which would, ultimately, if carried to the extreme, undermine the rule of law.
The current abortion proposal violates those three findings.

Instead of ensuring that both mother and baby are safe, this Bill wants to begin the medieval practise of offering the violence of abortion as a solution to a woman in crisis. Where mental health issues arise in pregnancy, the answer must be to offer support, compassion and professional assistance. This Bill seeks to end the life of a baby instead.

This is a cruel, archaic and unacceptable Bill. It should be abandoned. Mothers and babies deserve better.

WHY SHOULD THIS BILL BE SCRAPED?

Watch former abortionist Dr. Anthony Levatino testity before US Congress on what the procedure is for abortions on babies over 20 weeks.