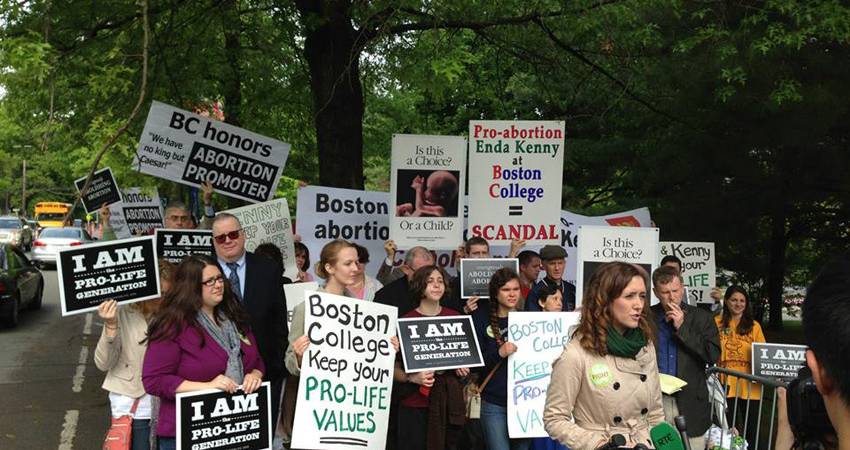 Ireland has long been the world leader in maternal health and respect for women, but now the Irish government has launched a vicious attack against women, exploiting them to build a case for brutal abortion legislation.

As an Irish-American, I have always admired “my people” for remaining steadfast in their respect for all human life, including women and their children – both born and unborn. But, the recent move by Prime Minister Enda Kenny and his political comrades to push forward extreme abortion legislation, which would allow for abortion through all nine months of pregnancy, has led me and many other Irish-Americans to be deeply troubled.

The Eighth Amendment to the Irish Constitution declares that women and their unborn children are to be treated as equals. The Irish recognize that all human life is precious, and that all people have an intrinsic right to their lives. As the Constitution puts it:

This amendment has codified the timeless respect for human life that the country has always held and acknowledges the pro-life ethos that has existed in the culture and life of Ireland throughout its rich history.

Medical professionals in Ireland are taught to work by the principles of the Constitution, treating the mother and her unborn child as equals. Ireland has one of the lowest maternal mortality rates in the world, according to the U.N. and the World Health Organization, even though abortion is illegal throughout the nation. Women are never refused life-saving medical care in Ireland, and women are treated every single day for life-threatening issues such as ectopic pregnancy, preeclampsia, and cancer. And through all this, Ireland is an abortion-free nation.

In 2011, Enda Kenny was brought to power as the Prime Minister of Ireland, after promising that he would uphold the country’s pro-life laws and never legislate He led his party, Fine Gael, to become the leader in Ireland, after Labour Party leader Eamon Gilmore asserted on a radio program in January 2011 that one of his top priorities would be to liberalize Ireland’s abortion laws.

Nearly two weeks ago, the coalition government, with Fine Gael Prime Minister Enda Kenny as its leader, introduced legislation that would legalize abortion and allow doctors to directly end the life of a child if they consider a woman’s life at risk – including the dubious case where a woman is threatening suicide. The current law allows doctors to induce early labor, if it is medically warranted to save the mother’s life, but they are still required to treat both the mother and the child. In Ireland today, Doctors may wind up ending the child’s life in the course of life-saving treatment for the mother, but they will never go in with the intent of killing the child.

Kenny’s bill allows doctors to affirmatively act to end the lives of unborn children. This legislation will not only destroy the protection for all human life that the country has always held, but it will also open the door to horrifying abortion cases such as Kermit Gosnell or the abortionists featured in Live Action’s latest investigation.

Ireland has long been a country that protects the most innocent and stands up for the lives of all of its people.  But all of that is about to change.  Ireland’s government – the people elected specifically to safeguard Ireland and its inhabitants – have decided to completely reverse course and launch a shocking attack on women.

In November, the news broke that a pregnant Indian national named Savita Halappanavar died in Galway Hospital. With suspicious swiftness, the pro-abortion crowd erupted with claims that Savita had died because she was refused an allegedly life-saving abortion.

But the inquest into Savita’s death revealed that she died after a rare form of E. coli entered her bloodstream. An abortion would not have saved her life.

Abortion advocates knew about Savita’s death before it was released to the public, and they exploited her death to build an abortion-pushing media narrative. Unsurprisingly, the same movement that shows no compassion whatsoever for the millions of children abortion kills, has no qualms about making a political opportunity out of this woman’s untimely death.

More recently, the mother in Ireland’s notorious “C Case” spoke out about being taken to England for an abortion after being brutally raped as a 13-year-old girl.

“Miss C” was taken into state custody and placed in a foster home after the rape, and shortly after, state officials found that she was pregnant. “What’s pregnant?” she asked.

“They said ‘you are having a baby,'” “Miss C” recalled. “I didn’t understand how I could be. A few weeks later, they [the state] came and took me on a plane to London.” She continued:

The next day, I was taken to a building. All I remember next was being wheeled on a trolley and screaming with the pain. They gave me an injection, and when I woke up, the pain had gone. Eventually they told me the baby was dead.

Now, nearly 16 years later, the young woman is seeking answers from the state about her abortion as she tries to deal with the agonizing aftereffects.

Abortion advocates have launched a vicious attack on women in Ireland, by exploiting them and forcing dangerous society-wide changes through lies and deceit. The Irish people are being ignored because the clamor of abortion proponents has held the ear of the politicians. There are no plans to give the people a vote on abortion in Ireland, but the Irish government plans to simply push through their abortion legislation, and leave the pro-life majority in the dust.

A country that has long protected the freedom and life of its people is now beating them into submission and hoping they will just remain silent. As an Irish-American, I am disturbed that Prime Minister Enda Kenny and the Irish government are infringing on the freedom of the Irish people in this way.

There are more Irish in America, than on the Island of Ireland itself. The United States is the second-largest market for tourism to Ireland; Ireland had over 855,000 visitors from the U.S. in 2011. In terms of visitors, holidaymakers, promotions, and revenue, Ireland can hardly find a better ally than the U.S.

Enda Kenny has been promoting tourism to Ireland through ‘The Gathering’‘ in hopes that it would help boost the tourism market in Ireland and help the dire economy. Irish-Americans will not ignore the fact that Kenny is using his power to force abortion into a pro-life country against its people’s wishes.

This is our homeland, the land of our ancestors. I, as well as most other Irish-Americans, long for Ireland when we’re away and I constantly look forward to my next trip over. But, so long as Enda Kenny and his government continue this attack on women and their children, and on our country, we will stand with a pro-life country and will not be traveling to Ireland via ‘The Gathering’ or any like tourism outlet.