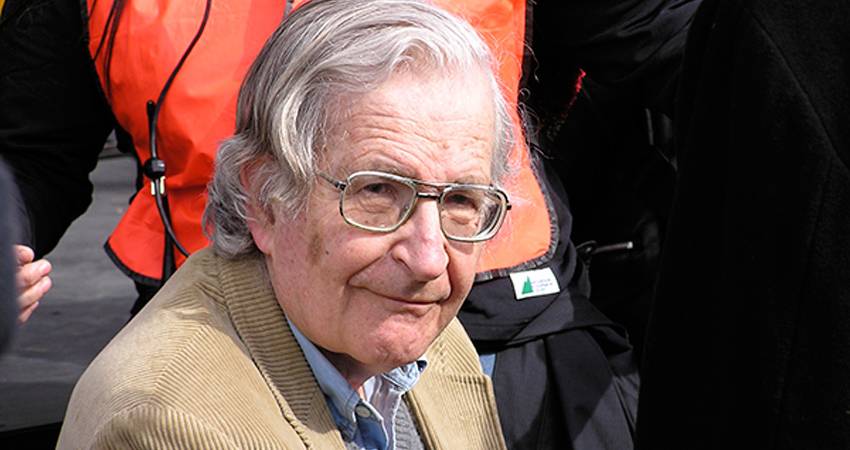 Stick to what you know: Naom Chomsky fails biology 101

In a discussion on women’s rights in Islamic States he told Ireland’s Newstalk Radio that when it comes to “the treatment of women, one thing Ireland could do is look at itself.”

“Just recently a woman died because she couldn’t get an abortion which would save her life – that’s a problem that women face in Ireland, we should begin by looking at ourselves,” he said.

Prof Chomsky was talking about the tragic death of Savita Halappanavar, but he was wrong. According to her official preliminary autopsy report, Savita died from E.coli septicaemia documented ante-mortum. This means that the cause of her of death was from a resistant strain of bacteria poisoning her blood, which lead to her developing septic shock and subsequent cardiac arrest. An investigation into the factors which may have contributed to her death has not yet been published, while the inquest is only now underway.

Clearly, Chomsky was declaring supposition to be a fact, and basing his certainty on media reports rather than the findings of an investigation; which is somewhat surprising for a renowned scientist.

His comments were about to get a lot more bizarre, however.

Restrictive abortion laws are “attacks on women’s rights” he told a reception in University College Dublin (UCD), where he was awarded the UCD Ulysses Medal, the university’s highest honour.

“There is a strong debate at the moment with regards to a woman’s right to control an organ of her own body – namely the foetus,” he continued.

‘An organ of her own body?’ This is basic biology. Teenagers know better than this. Anyone who claims that the foetus is an ‘organ’ of a woman’s body denies centuries of progress in biology and medicine, and is either a luddite or is using perverse arguments in an attempt to sway opinion.

Do I even need to spell out what every school child knows: that a new life is produced at conception. And that unborn children begin to develop their own organs just three weeks after that point.

Or that, while the womb is an organ, the human child growing in the womb is defined by every medical handbook as a distinct human organism – one who receives love and care and nutrients from his/her mother.

Now, Prof Chomsky is a smart man, so I think we can say with some certainty that he knows the above to be true just as much as I do.

So it would seem that he was engaging in old-fashioned propaganda, the sort that seeks to dehumanise a whole section of the human family in order to justify their killing.

And he was on a roll. In UCD he also railed against personhood legislation being enacted in the U.S.

“There is legislation being enacted in several US states to define personhood as a fertilised egg,” he said. “Pretty soon you can imagine legislation prohibiting the washing of hands because thousands of cells are flaked off that could be turned into a stem cell and you can grow a foetus – so you’re killing a person. It’s attacks on women’s rights.”

Obviously, what Prof Chomsky should have said was that the legislation recognised the personhood of the human embryo, something I strongly support. But he also seemed to be suggesting that pro-life legislation would attribute personhood to skin cells.

This is an entirely daft argument, but it’s used in the hope of fooling the shrinking number of people who don’t understand the difference between a cell, which is the fundamental unit of all living organisms; and an organism, such as an unborn child.

Embryology textbooks point out that all of us started off life as a highly specialised, genetically distinct, single-celled, human organism – formed by the union of two reproductive cells, which are, of course, designed to be different from cells like skin cells for the purpose of reproduction.

We don’t begin life as a skin cell, and Prof Chomsky is trading on ignorance in making such a frankly preposterous remark.

His remarks didn’t seem to meet with favour from his Dublin audience, who, according to one abortion supporter, were silent for Chomsky’s remarks on abortion, in stark contrast to the approval that accompanied his pronouncements on other issues.

It’s ironic, isn’t it, that Noam Chomsky, who is famed for his anti-imperialistic and anti-interventionist views, chooses to the be the latest in a line of external commentators to come to Ireland and presume to interfere in our right to protect our mothers and babies from abortion.

With respect, we Irish will decide our own laws. Thirty years of protecting human life has taught us that abortion is never medically necessary – and Ireland, without abortion, is one of the safest places in the world to be pregnant, according to the UN.

Maybe Prof Chomsky had one thing right; Ireland can start by looking at itself – and then looking at sharing that success. We’ve shown that being pro-life means we can protect both mother and baby, and that’s an example for the world to follow.