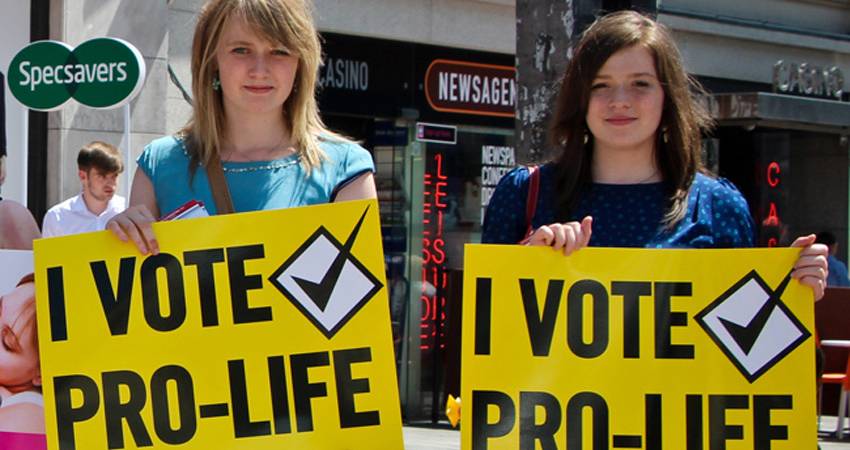 False piety only underlines what the abortion party has done

Three weeks before a major Irish election, an Taoiseach, Enda Kenny popped over to Rome to attend the canonisation of Saint John Paul II.

He then flew back home to make a big media splash about the invitation he had given to Pope Francis to visit Ireland.

This was Kenny playing the Catholic card, and he was giving it socks, talking up the Papacy and claiming that relations had improved between the Church and his government.

However, this false piety is fooling no-one, and the nation is currently being reminded of exactly what Kenny stands for by our Vote Pro-Life campaign reaching hundreds of thousands of voters before the Election on May 23rd.

This is the Taoiseach who, just twelve months ago, forced through a cruel and horrific Abortion Act which legalised abortion through all nine months of pregnancy in Ireland.

The same Taoiseach who broke the promise he made not to legalise abortion in Election 2001.

Who ‘coerced and cajoled‘ his fellow Fine Gael party members to support abortion legislation, according to Lucinda Creighton, previously one of Fine Gael’s rising stars.

Who applied the party whip to force politicians to vote against their conscience on a matter which is universally acknowledged to be one where the right to vote according to conscience must apply.

And who acted in the most ruthless fashion possible towards those party members who voted against abortion, expelling them from the party, from political committees, even from their offices and the party website overnight.

Kenny’s actions made Fine Gael the Abortion Party, and his legislation made abortion until birth legal in Ireland.

He needs to called out for what he is: a hypocrite, and, even worse, a hypocrite who is seeking to court the Catholic vote now that the polls have confirmed that Fine Gael’s vote is dropping fast with just weeks to go until the election.

The false piety only serves to underline what Fine Gael has done. And there is no doubt that the hardening of resolve amongst pro-life voters is a real factor in the declining vote for Kenny’s party.

Last year the Life Institute and Youth Defence signed up 100,000 voters who pledged never to support Fine Gael again if they legalised abortion. No other Irish campaign in recent times on any issue has managed to engage Irish voters in this way.

Now our Vote Pro Life  campaign is serving to remind and motivate pro-life voters in a particularly focused and targeted way. It will show results.

Election 2014 will show that the massive crowds who turned out to Rally for Life last year have not forgotten what Fine Gael has done.

Our mothers and babies deserve no less. Together we will overturn this cruel abortion act and bring Ireland Back to Life.