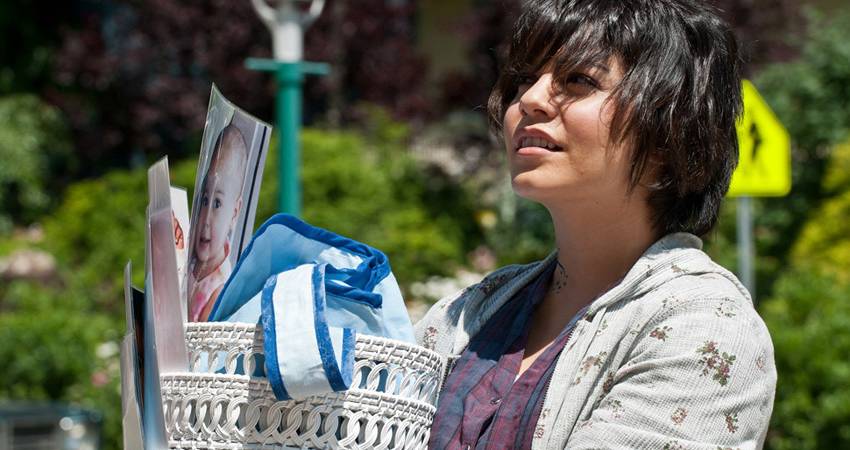 Gimme shelter and the choice we make

Every day we make choices.

Some choices don’t really affect anything in our lives, while others have the capacity to shift our life in a whole new direction

Gimme Shelter is all about the choices we make.

The film starts off with Vanessa Hudgens standing in a bathroom, chopping off her hair saying, “I’m not scared. I can do this. I’m okay.” This scene is only the beginning of Hudgens’ most breath-taking and honest performance to date.

In Gimme Shelter, Hudgens plays a 16-year-old girl who is bound by the confines of her drug-addicted mother, played by Rosario Dawson. Hudgens’ character “Agnes”, who wants to be referred to as “Apple”, says, “By the time I was twelve, I was in my tenth foster home.” She was abused “in the system” and wanted to find a way out.

Running away from home, she felt, was her only option “out of the system”.

With nothing but a handful of dollar bills, Apple makes the brave move to run away. She eventually finds her way to her birth father’s estate in New Jersey. The only problem is – she’s never met her father.

For years she clung to a letter that her father, played by Brendan Fraser, wrote her before she was born, saying that he was “sorry” that he couldn’t be there for her, but didn’t want to let his family down and needed to finish college before he became a father.

Fraser’s character is now married with two other children, living the dream with his perfect family and powerful job on Wall Street. But, he decides to help Apple because recognizes his responsibility as her father.

A few days after her arrival, Apple finds out she is pregnant. “I only did it once,” she says. Her father and his wife decide the best option for Apple is for her to “turn the page on this. Put it all behind you. So you can move forward.” They made an appointment for her at a local clinic. Her father says, “You’ll forget about it.” Apple replied, “Like you did with me.”

It’s clear that Apple must follow their orders if she wants to continue living under their roof, so she goes to the clinic.

But while changing into her hospital gown, something changes. Apple had shoved her unborn baby’s ultrasound picture in her shoe and stumbled upon it as she was changing. As she gazed upon the picture of the little person growing inside of her, she made another courageous move… she ran.

Apple ran out of the clinic, down the street, as far as she could get and she never looked back. She knew she couldn’t go back to her father’s house and she definitely could not return to her drug-addicted mother’s house.

This brave 16-year-old girl was left with nothing, except for her convictions and the little hope that she could muster.

Through a series of unfortunate events (or fortunate, depending on how you look at it), Apple came in contact with a priest, played by James Earl Jones – who changes her life forever.

The priest connects Apple with a woman named Kathy DiFiore, who runs a shelter for young pregnant women. Kathy, in the film and in real life, gives women a safe place to begin their journey as a mother and allows them to live in her home for as long or as short as they like.

Many of the girls come from backgrounds such as Apple, others are worse, and others simply have nowhere else to turn.

Apple, yet again, takes a brave step and moves into this home with girls she has never met, including Kathy. But this decision changes her life and she blossoms with the love and support she receives here, as does her child.

This is a film that you do not want to miss.

Apple’s journey is much like everyone else’s, in a way. Sure, she comes from a horribly troubled background and she doesn’t have a single outlet of support in this world. But the choices she made shaped how her life story played out. This is really no different from any of us.

John Steinbeck writes about this theme in his book East of Eden. This idea, often referred to as “Timshel” is a Hebrew word that translates to “thou mayest”, and refers to man’s ability to choose good or evil.

In many circumstances, we have the ability to create our own reality. Sure, there are things that we cannot control. In Apple’s case, she could not control the environment that she was born into, or the state of her mother – but she could choose to rise above it and fight her way out.

The choices we make, good or bad, shape the outcome of our lives – and often the lives around us.

If you don’t like where you are in life, make a change. If you don’t like your job, find a new one. If you’re in an abusive relationship, get out now. We have the ability to create our own destiny, but we have to start with the right now. Make the change that you want to see in your life. You will not regret it.

For more on Gimme Shelter and to hear more of the real stories of real women, visit: Gimme Inspiration.